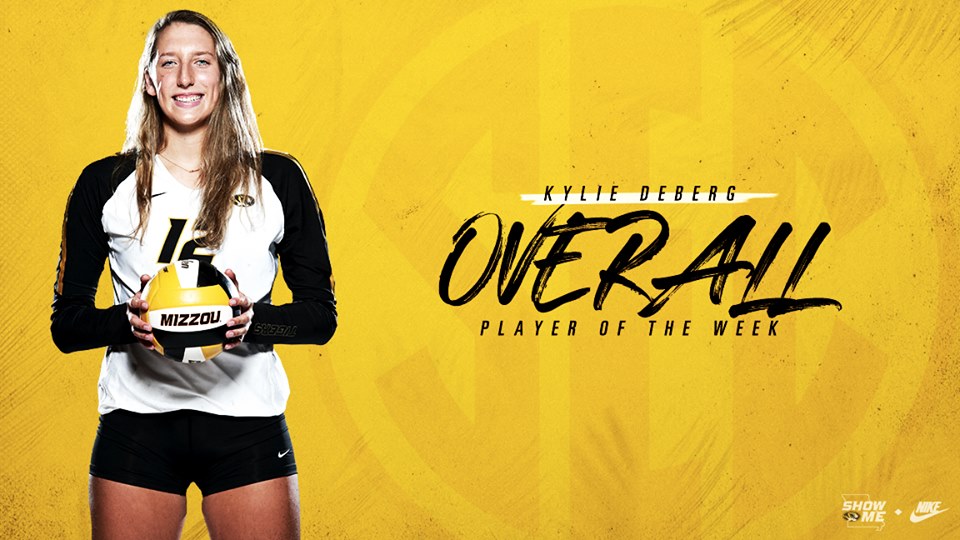 After leading the Tigers to an upset win over #11 Florida on Sunday, Missouri's Kylie Deberg has been named both SEC Player and Offensive Player of the Week.  Current Photo via Missouri Athletics

After leading the Tigers to an upset win over #11 Florida on Sunday, Missouri’s Kylie Deberg has been named both SEC Player and Offensive Player of the Week.

SEC Co-Defensive Players of the Week

Arkansas’ Okiana Valle averaged 7.57 digs per set this past week for the Razorbacks. She recorded 26 digs against South Carolina and 27 against Alabama.

Florida’s Taelor Kellum averaged 2.78 blocks per set this past weekend for the Gators. She registered a career-high 13 total blocks against Missouri on Sunday.

Kentucky’s Madison Lilley averaged 10.12 assists per set and led the Wildcats to hit .272 over two conference road wins. She posted back-to-back double-doubles with 30 assists and 16 digs at LSU, followed by 51 assists and a career-high 19 digs at Texas A&M.

Two double-doubles this week, two weeks in a row as @SEC Setter of the Week! 😼

Missouri’s Andrea Fuentes averaged 9.44 assists per set in a pair of conference wins. She tallied a career-high 47 assists at No. 11 Florida, marking her third 40-plus assist match this season.