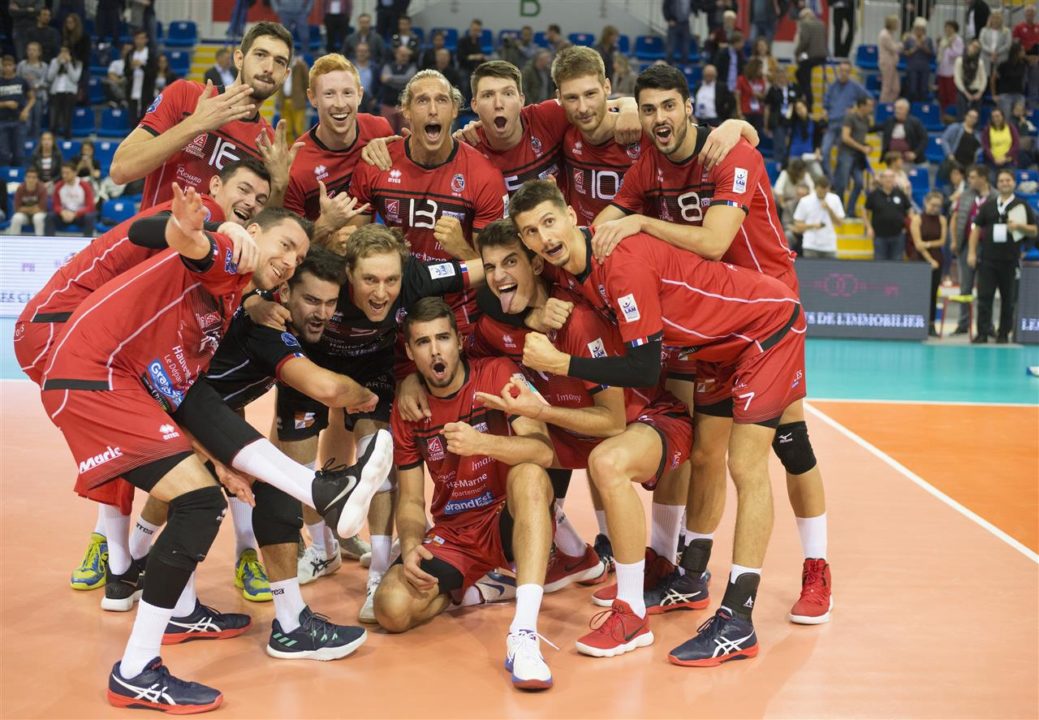 Chaumont looks to continue their hot streak through to the 3rd Round.  Current Photo via CEV

The Second Round of the CEV Champions League will get underway on Tuesday as eight teams compete for the last two spots in the group stage of the Fourth Round of the CEV’s  new format for this year’s competition. This round will consist of a home and home series between the two teams in the match-up. Standard classification points are in effect: 3 points for a win in 3 or 4 sets, 2 points for a win in 5 sets, 1 point for a loss in 5 sets, 0 points for a loss in 3 or 4 sets.

Chaumont beat Viking TIF Bergen of Norway in two consecutive sweeps to advance to this round. CV Teurel split a pair of matches (both sweeps) with Lindemans Aalst of Belgium, but won the golden set.

United Volleys split their matches with Shakhtior Soligorsk of Belarus, but they lost in 5 sets after wining in 3 sets. They advance by virtue of earning 4 points compared to Shakhtior’s 2. Posojlinica beat Abiant Lycurgus Groningen in a similar fashion. They earned 3 points in a 3-1 win and followed it up with a 5-set loss to earn another point.

Neftohimic defeated OK Mladost Brcko of Bosnia and Herzegovina in both of their First Round matches. They finished the match up with a maximum 6 points. Vojvodina beat Mladost Zagreb in both matches as well. They earned 5 points as their first match went 5 sets.

PAOK won both matches with VRCK Kazincbaricka of Hungary to advance. They survived the first match on the road in 5 sets, and they earned a sweep in the return leg at home. Istanbul BBSK beat Ford Store Levoranta Sastamala in both matches as well. as with PAOK, they won the first match in 5 sets, and then they were able to secure progression into this round with a win in 4 sets at home.