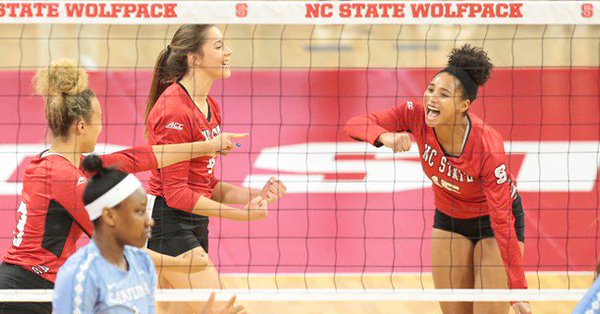 It was also the Wolfpack’s first sweep in ACC play this season. Additionally, NC State recorded consecutive home wins versus UNC-CH for the first time since 1990-91 thanks to its 3-2 victory last season.

“We’re obviously thrilled to win at home and sweep UNC-Chapel Hill,” said head coach Linda Hampton-Keith. “It’s a great rivalry match and we have a lot of respect for their program and the rivalry between us.

“It’s always great to win at home and to do it in the fashion we did it, was really exciting.”

– NC State recorded a team attacking percentage of .290 for the match and limited UNC-CH to a .145 clip.

– The Wolfpack moves to 11-0 on the year when tallying a higher attacking percentage than its opponent.

– Additionally, the Pack is 11-3 this season when holding its opponent to a hitting percentage less than .200.

– NC State ranks second in the ACC in digs per set and tallied more digs than the Heels (54-37) to mark the 17thtime that the Wolfpack has out-dug its opponent.

– NC State closed out the first set with five consecutive points to win the frame, 25-22, and take a 1-0 lead in the match.

– UNC-Chapel Hill went ahead 23-22 after a kill from Skylar Wine, but a service error followed and sparked a 5-0 run.

– Back-to-back kills from senior Teni Sopitan along with a bad set from the Tar Heels prior to a service ace from Kaylee Frazier powered the Pack to the first-set win.

– The second set featured 10 ties, but it was UNC-CH with a pair of critical attacking errors down the stretch that led to a pair of NC State points to clinch the set.

– NC State pulled ahead 24-22, but the Heels fought off two set-point opportunities to knot the set before the Wolfpack took the set, 26-24.

– A 7-2 run gave the Pack control of the third set, as NCSU grabbed a 15-10 advantage at the media timeout.

– Following a UNC-Chapel Hill service error, Keira Moore and Kylie Pickrell combined on a block to spark a Wolfpack run to close out the set, 25-16, and the match, 3-0.

– Sopitan led all players in the contest with 15 kills on 34 attempts to tally a .324 attacking percentage.

– Freshman Jade Parchment put down 10 kills to go along with 11 digs to notch her sixth double-double of the season.

– Lauryn Terry also turned in a strong offensive performance with nine kills and a match-high .643 attacking percentage, as she did not commit an error on 14 swings.

– Pickrell averaged nearly 14 assists per set, finishing the night with 40 assists in the three-set match and also contributed nine digs.

NC State will have a week until its next match, as the Wolfpack will host Syracuse on Wednesday, Nov. 21. First serve is slated for 2 p.m. inside Reynolds Coliseum.

RALEIGH, N.C. – Despite out-blocking NC State, North Carolina dropped a three-set match to the Wolfpack on Wednesday afternoon at Reynolds Coliseum. The Tar Heels (7-18, 3-13 ACC) and Wolfpack battled through 26 tie scores, but NC State (14-12, 8-8 ACC) was able to capitalize on homecourt advantage for the win.

NC State’s Teni Sopitan slugged a match-best 15 kills while Jade Parchment posted a double-double with 10 kills and 11 digs. The Wolfpack hit .290 as a team, limiting Carolina to a .145 clip to come away with the win.

NC State earned the first two points of the match to take a narrow lead, but a trio of kills by Raleigh Clark put Carolina back on top, 9-8. Bell and Wine formed UNC’s first block of the match. Back-to-back stuffs by Clark and Atherton with a Destiny Cox solo block gave the Tar Heels a 15-14 lead. However, the Wolfpack quickly knotted the frame up with a Sopitan kill. Greer Moseman slugged a crucial ace, putting UNC ahead 21-19 as State called its second timeout. However, the Wolfpack finished the set on a 5-0 run for the 25-22 decision.

State jumped to an early 5-2 lead before UNC battled back. Atherton slugged an ace in the second frame as the Tar Heels evened up the score at 9-all. Carolina went on a four-point run for the 17-15 lead but the Wolfpack knotted the set up five times before reaching set-point. The Tar Heels battled through two set points as Tontai and Wine slugged kills to even up the score at 24-24. However, a pair of Carolina miscues gave State the set, 26-24, for a 2-0 lead.

Carolina and State battled early in the third set, keeping the score within one until 8-8. A trio of runs gave the Wolfpack the only edge it would need. Tontai slugged four kills in the frame to lead UNC, but it wasn’t enough. NC State closed out the match on a 6-1 run for the 25-16 decision.

It sad that North Carolina volleyball is at the point it is now. Just to think that just a few years ago they were one of the top teams in the NCAA.