Bruns, Papesh, Wolf, Wood Tabbed for A-10 Player of the Year Honors 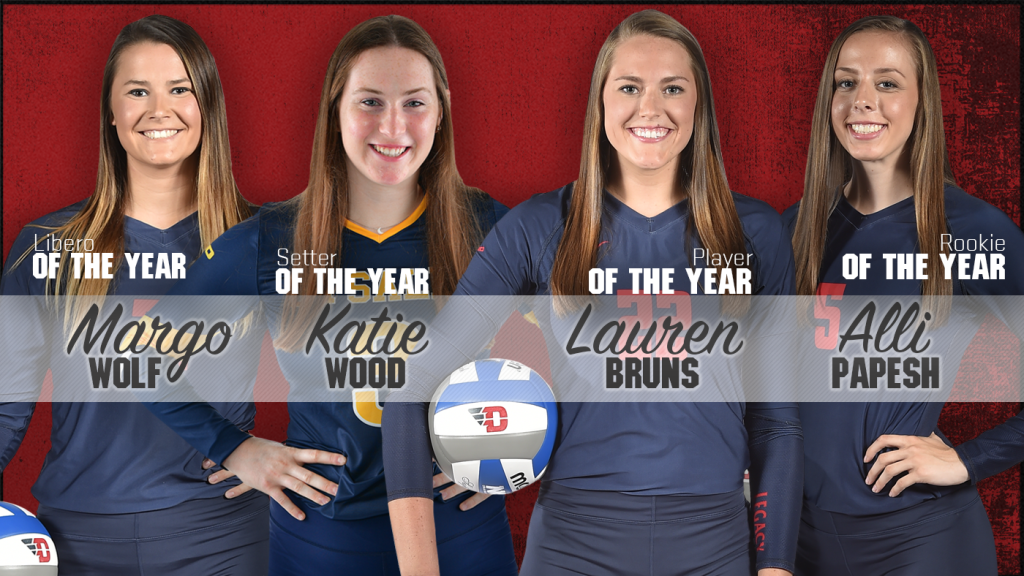 The Atlantic 10 announced the five awards along with the All-Conference, All-Rookie and All-Academic teams Thursday prior to the 2018 A-10 Volleyball Championship that begins Friday at Stuart C. Siegel Center in Richmond, Va. The major awards, All-Conference Teams and All-Rookie Team were voted on by the A-10’s head volleyball coaches. The All-Academic team was selected by the volleyball media relations directors.

Bruns, an outside hitter from Versailles, Ohio, was named the Atlantic 10 Player of the Year following a season in which she received A-10 weekly accolades on five occasions and led the league in kills (459), kills per set (4.33), points (497) and points per set (4.7).

Wolf, a libero from Cincinnati, Ohio, earned A-10 Libero of the Year honors for the second time in her career after recording 402 digs and averaging 3.79 digs per set.

Papesh, an outside hitter from Channahon, Ill., was named A-10 Rookie of the Year after finishing in the top 10 in conference-only kills per set (2.88) and hitting percentage (.273). She also led all freshman in kills, kills per set and points.

Schweihofer won her first Coach of the Year award after leading La Salle to its first-ever appearance in the Atlantic 10 Championship.

The 2018 Atlantic 10 Volleyball Championship begins Friday with two matches between No. 4 George Mason and No. 5 Saint Louis in the first quarterfinal and No. 3 La Salle and No. 6 Duquesne in the second quarterfinal. No. 1 VCU and No. 2 Dayton will face the two winners in Saturday’s semifinals. The championship final will be played Sunday at 12:00 pm ET. All three rounds of the A-10 championship will be streamed live on ESPN+.

*A tie resulted in an eight person