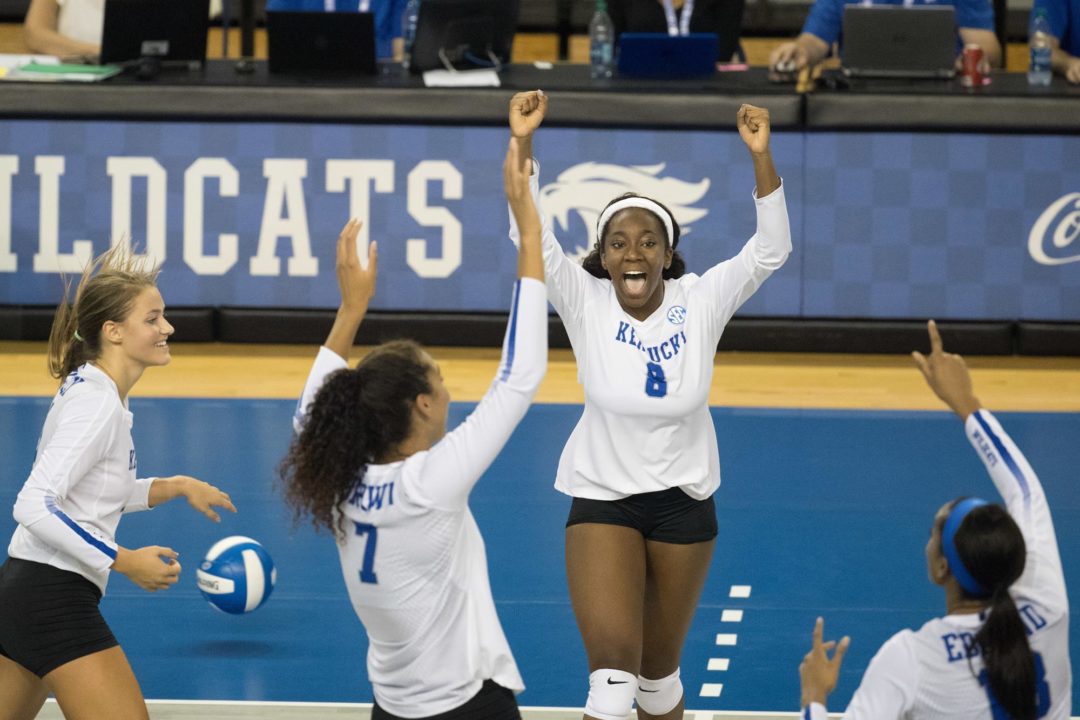 There are just 16 teams left in the NCAA Division I Tournament and in the Lexington Region, there are just four teams left and three matches until the final team is standing in the region. Current Photo via Kentucky Athletics

There are just 16 teams left in the NCAA Division I Tournament and in the Lexington Region, there are just four teams left and three matches until the final team is standing in the region. The one team left standing following the three matches in the Lexington Region will move on to the Final Four in Kansas City, Missouri and play at the Sprint Center as a contender for the national title.

Four different conferences are represented in the Lexington Region, with Big Ten co-champions Nebraska are favored to emerge as the regions victor. However, #4 seeded Kentucky is looking to be the bump in their way as they are the hosts of the region. BYU and Colorado will also make their cases going forward with the regional semifinal matches starting on December 8.

How They Got Here: Kentucky (16-3, 17-1 SEC) won the SEC title for the first time since 1988. In the tournament, Kentucky swept through ETSU in the first round but had to fight back from a 0-2 deficit to defeat WKU in five.

Individual Stat Leaders: Leah Edmond has been the leader for Kentucky on offense this season with 4.53 kills per set while Avery Skinner added another 3.32 along with Kaz Brown‘s 2.45 kills per set.

Freshman setter Madison Lilley has led the Kentucky offense to the #1 SEC hitting percentage of .321 which ranks #3 in the NCAA. Lilley’s mark of 13.73 assists per set ranks 7th nationally and has helped the team to 15.01 kills per set that ranks #4 in the NCAA. Both marks were the top spot in the SEC.

On defense, the Wildcats worst mark of the year, Ashley Dusek was the leader in the category with 4.44 digs per set. At the net, Brown produced 1.20 blocks per set.

How They Got Here: BYU (28-2, 17-1 WCC) won WCC to pick up the automatic bid. BYU has swept both American and Oregon to advance to the regional semifinals.

Individual Stat Leaders: Veronica Jones-Perry leads BU with 545 kills on the year for an average of 4.82 kills per set. Also, a strong force is McKenna Miller with 3.15 kills per set while Cosy Burnett adds another 2.23 kills per set.

The team has one stand-alone setter in Lyndie Haddock who has dished out 10.10 assists per set on the year.

How They Got Here: Nebraska (26-4, 19-1 Big Ten) claimed the Big Ten title for an automatic berth in the tournament. Nebraska has had no problems making it to the regional semifinals, sweeping through Stony Brook and Washington State.

Kelly Hunter has held down the setting position for the Huskers this season with an average of 10.79 assists per set while picking up the Big Ten Setter of the Year honor.

On defense, Kenzie Maloney led the way with 3.60 digs per set that helped the team to a 15.04 dig per set mark. This is a down year for the Huskers in the defensive slot, with the loss of Justine Wong-Orantes, though Maloney has helped Nebraska to the #2 Big Ten dig slot. At the net, Holman led the blocking effort with 1.13 blocks per set along with Stivrins with 1.00.

Individual Stat Leaders: Alexa Smith led the Buffs with 3.99 kills per set while Frankie Shebby added another 3.52 kills per set along with Naghede Abu‘s 2.12.

Freshman Brynna DeLuzio posted 11.10 assists per set to help the team to a .252 hitting clip on the year.