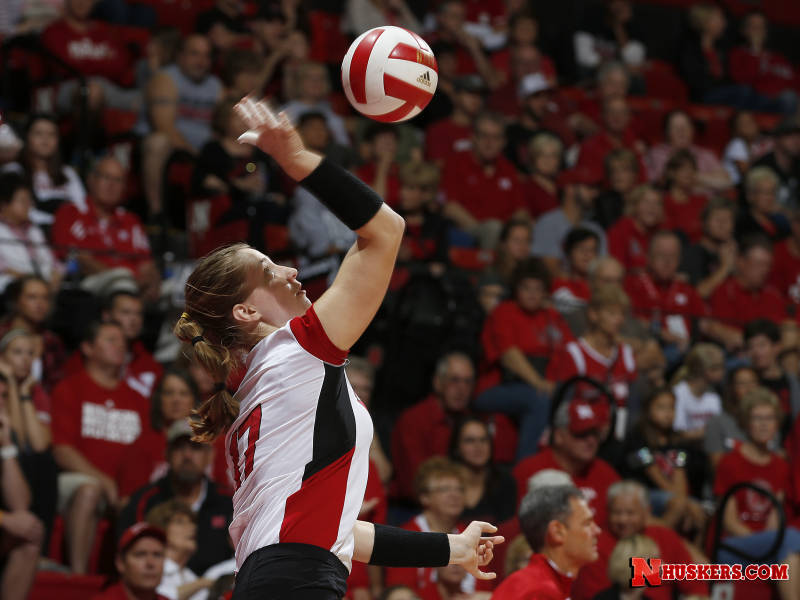 Annika Albrecht has led Nebraska in aces in each of the last three seasons. Current Photo via Nebraska Athletics/Huskers.com

The 5th-ranked Nebraska women’s volleyball team have appointed seniors Kelly Hunter and Annika Albrecht as team captains for the 2017 season.

The two-captain approach is a deviation from last season, where Hunter was appointed unilaterally by Cook as the team’s only captain without a team vote.

Prior to last season, Cook told HuskerExtra that “Kelly was a captain last year along with (departed senior) Alicia Ostrander, and I felt Kelly did a great job. It was just natural for her to stay as captain. And sometimes if you name three or four captains, it dilutes the meaning of it.

“Kelly’s earned it. The girls really respect her.”

That means 2017 will be Hunter’s 3rd straight year as a captain and Albrecht’s first. Of the 8 players (including libero) who started more than 1 game last season, only 4 return this season: Hunter, Albercht, fellow senior, middle blocker Briana Holman, and junior outside hitter Mikaela Foecke.

Hunter enters the season ranked #8 on the team’s all-time rankings in assists with 2,881. If she matches the 1,315 she had last year, then she would finish her career ranked 2nd on Nebraska’s all-time lists in the categories.

Albrecht, an outside hitter, is one of the best servers in Nebraska history. She’s lead the team in aces in each of her 3 seasons with the program, recording 36, 41, and 28, respectively as a freshman, sophomore, and junior. She’s just 8 aces away from cracking the school’s all-time top 10.

Albrecht last season played in all 34 Nebraska matches and started 26 of them – mostly as a service and defensive specialist. She had just 25 kills on the season (fewer than the number of aces she had), to go with 451 service receipts and 229 digs – which ranked her 2nd and 3rd on the team, respectively.

Nebraska opens their competitive season next weekend at the VERT Challenge in Gainesville, Florida. There they will play preseason #9 Florida and #15 Oregon. In at least one of those matches, they will play without their leader Hunter, who is rehabbing an undisclosed injury and isn’t yet ready to play back-to-back matches.

Albrecht had 6 kills and 7 errors playing for red in the intrasquad red-white scrimmage on Saturday, while Hunter didn’t play while dealing with injury.