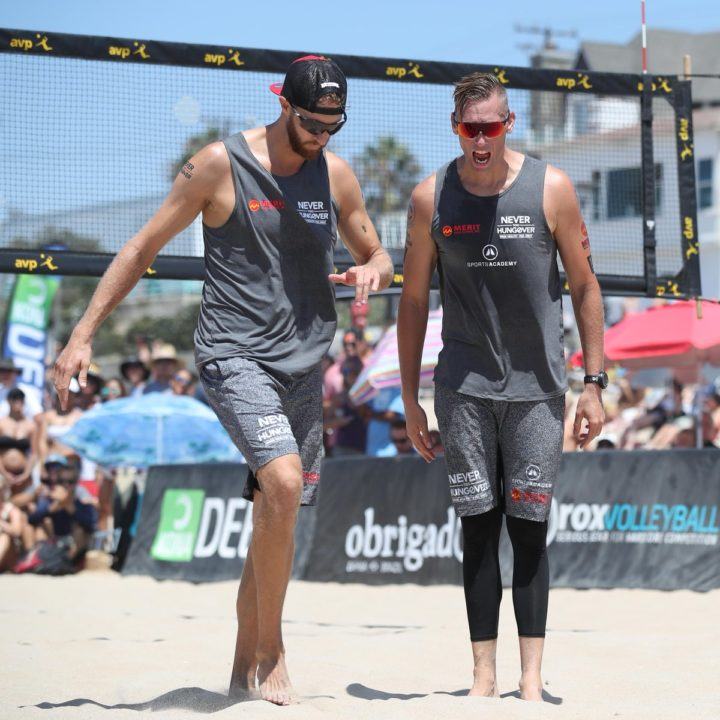 No. 9 seed Reid Priddy and Ricardo Santos and No. 6 seed Theo Brunner and Casey Paterson are on to the Manhattan Beach Open semifinals after dispatching the top two seeds of the tournament in the quarterfinals. Current Photo via AVP

No. 9 seed Reid Priddy and Ricardo Santos and No. 6 seed Theo Brunner and Casey Paterson are on to the Manhattan Beach Open semifinals after dispatching the top two seeds of the tournament in the quarterfinals.

Brunnner/Patterson took out top seeded Taylor Crabb and Jake Gibb (22-20, 21-13) in their third match as part of the contender’s bracket after falling to No. 3 Phil Dalhausser and Nick Lucena (21-15, 21-8) in the third round of main draw action. Brunner/Patterson defeated No. 8 seed Ed Ratledge and Eric Zaun (21-16, 21-16)  and No. 7 seed Jeremy Casebeer and John Mayer (22-20, 17-21, 15-10) to advance to the meeting with Crabb/Gibb. This is the third final four appearance for Brunner/Patterson in 2017, following fourth place finishes at the Long Beach President’s Cup and FIVB Rio Four Star.

On the winner’s side of the bracket, No. 4 Trevor Crabb and Sean Rosenthal and No. 3 Dalhausser/Lucena won four straight to earn their spot in the final four.

Crabb/Rosenthal will face Priddy/Ricardo in the first semifinal, while Brunner/Patterson will take on Dalhausser/Lucena. Both matches will be played at 12:45 p.m. ET. The winners will meet at 5 p.m. ET.