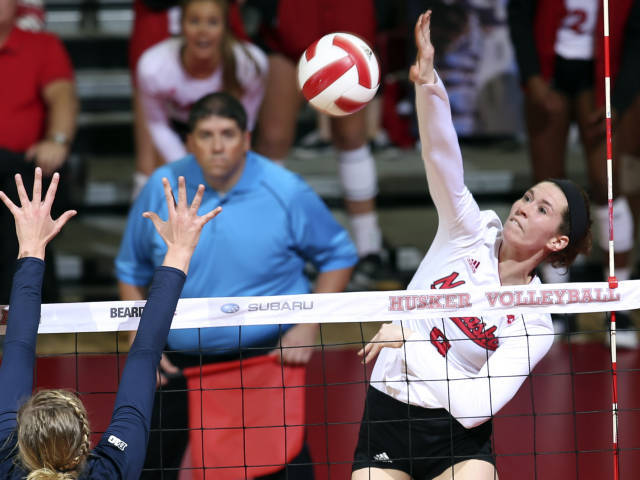 Andie Malloy of the University of Nebraska will be heading to Germany for her first professional volleyball season with VfB... Current Photo via Nebraska Athletics

Andie Malloy of the University of Nebraska will be heading to Germany for her first professional volleyball season with VfB Suhl LOTTO Thuringen. The 6’2 player from Texas will be an outside hitter for the club in the upcoming 2017-18 season.

Malloy began her collegiate career at Iowa State in 2012, where she averaged 1.97 kills per set and 1.65 digs per set in 25 matches. Concluding the season, Malloy transferred to Baylor but had to sit out a year due to an in-conference transfer. As a junior with Baylor, Malloy put down 3.89 kills per set and recorded 17 double-doubles to earn first-team All-Big 12 honors. In 2015, she posted 3.05 kills per set and 33 service aces.

In 2016, Malloy transferred to Nebraska as a graduate senior where she had 287 kills for an average of 2.66 kills per set on a .220 hitting percentage.

Though this is Malloy’s first professional contract internationally, she has competed overseas for Team USA when she toured Asia and took part in the World University Games in South Korea in 2014 and 2015.

VfB Suhl finished in 10th place in the 2016-17 regular season and was downed by Munster in the first round of the playoffs in straight matches. Malloy is expected to be a big contributor for the team this coming season.