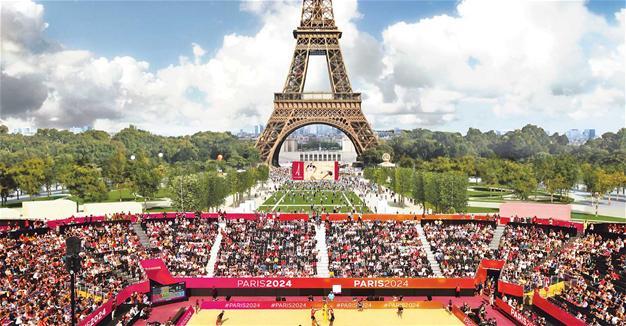 The 2024 Beach Volleyball matches will be held right below the Eiffel Tower, creating a gorgeous venue for competition.  Current Photo via Paris 2024

Paris recently received the news that they were selected as the host for the 2024 Olympics. This comes as excellent news to beach volleyball fans, as the venue Paris is creating for the 2024 competition will be a stunning stage for some of the world’s fiercest competitors.

As part of their plan to accommodate the Olympic games, 25% of the venues at the 2024 Olympics will be temporary. These temporary venues are being strategically created to make some of Paris’ most notable landmarks the stage for the games. The beach volleyball venue will be at the foot of the Eiffel Tower.

Alexandra Jupiter, a former French standout for USC and current beach player, is particularly excited about this venue. In a press release with FIVB, Jupiter stated, “Beach volleyball is always at an impressive location at the Olympics, but beach volleyball at the Eifel Tower would be pretty special. It would be impressive to me, and I’ve been there. I can’t imagine how impressive it would be for someone who’s never been there.”

While Paris won the 2024 bid, Los Angeles, who is expected to hold the 2028 Olympics, also had a special venue set up for beach volleyball. Their plan included a stadium that could sit 12,000 spectators on Santa Monica Beach by the Santa Monica Pier, widely considered the birth place of beach volleyball.