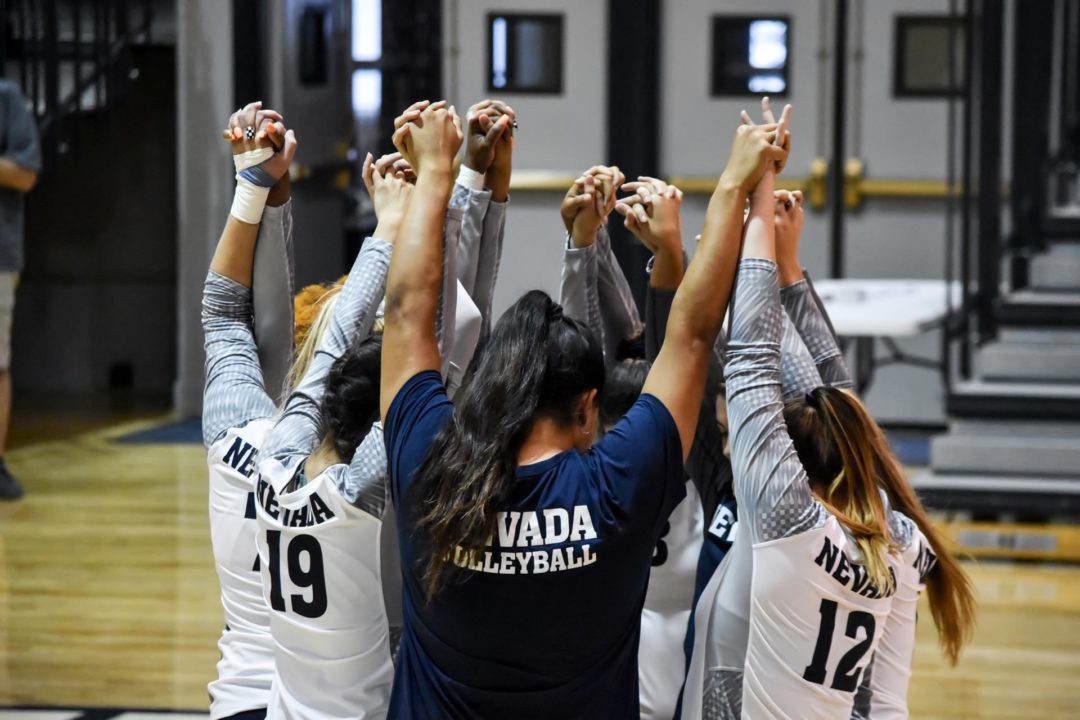 This week's Mountain West play opens on Tuesday, October 9 when Nevada visits San Jose State. The New Mexico Lobos, which lead the league at 5-1 and are off to their best start since the 2013 season, are back in action on Friday.  Current Photo via Nevada Athletics

COLORADO SPRINGS, Colo. – The New Mexico Lobos women’s volleyball program has won four-straight league matches, including a pair of victories versus Nevada and San José State this past weekend, to jump to the top of the Conference standings. In league play, the Lobos are holding their opponents to a .173 attack percentage and a MW third-best 11.46 kills per set. Lauren Twitty, the New Mexico junior outside hitter, is averaging 3.83 kills per set and 2.58 digs per set in league contests.

Fresno State remains second in the Conference standings at 4-1, after a split this past weekend at Utah State and Boise State. The Bulldogs are limiting their MW opponents attack to a league best .125. Offensively, FS is averaging 13.39 kills per set.

The San Diego State Aztecs are currently riding a four match win-streak after earning three wins this past weekend against (RV) San Diego, Boise State and Utah State. The Aztecs senior middle blocker Deja Harris was selected as the MW Defensive Player of the Week after notching 23 blocks during the weekend.

Nationally, the Wyoming Cowgirls are third in team total blocks (208.0) and blocks per set with 3.06. The team picked up two wins against Colorado State and Air Force at home to remain perfect on their home court this season (9-0). Cowgirls senior leader Reed Copeland leads the nation with 1.78 blocks per frame. Her teammate, middle blocker Jackie McBride, earned the MW Offensive Player of the Week award after tallying 23 kills with a .354 attack percentage during the weekend. Wyoming will host Utah State and Boise State this week.

Mariena Hayden, the UNLV sophomore, tallied seven more aces this weekend, which puts her at 107 for her career and third place in school history. She is three shy of taking second place in the UNLV record book and is 31 service aces shy of tying for fifth all-time in MW history. Hayden leads the nation in service aces per set with a 0.94 mark.

All 11 MW contests this week are available for stream on the Mountain West Network and fans can visit the MW Broadcast Guide at TheMW.com for more information.

This week opens on Tuesday, October 9 when Nevada visits San José
State for a 6 p.m. PT start. Wolf Pack junior setter Dalyn Burns is
averaging 9.78 assists per set, which is second in the league.

• Air Force senior Abigail Miksch became the sixth Division I student-
athlete in Falcons history to record more than 1,000 kills in a career.

• UNLV’s Mariena Hayden tallied seven more aces last weekend to notch
third place in school history and is three away from being second
all-time.
• The New Mexico Lobos are out to a 5-1 start in Conference action,
their best start since the 2013 season.