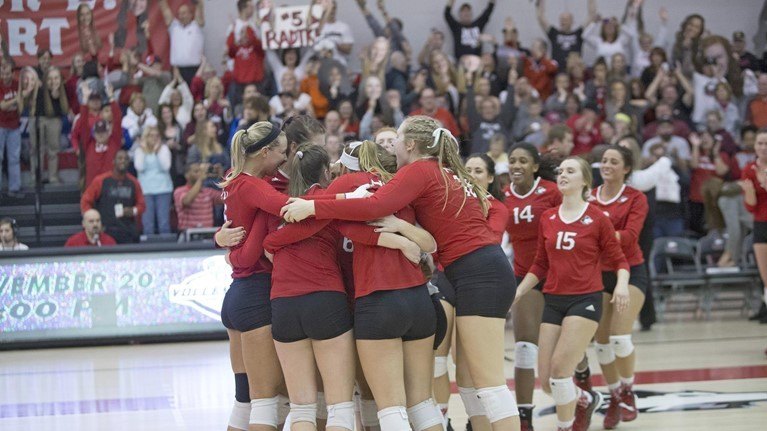 The reigning Mid-American Conference Champion’s NIU volleyball announced the addition of Amy Angelos to its coaching staff Monday afternoon, joining the Huskies after a season at Michigan.

“We are really excited for Amy to join our staff,” said Head Coach Ray Gooden. “Along with her diverse coaching experience in the Big Ten, at the NAIA level and in club, she has a good energy and drive that will help our program. She compliments our staff in many positive ways.”

Angelos comes to DeKalb from the University of Michigan where she helped the Wolverines to their sixth regional semifinal appearance and their highest NCAA Tournament seed (No. 12) in program history.

She worked primarily with the middle blockers during her first season with the Maize and Blue, including All-American Abby Cole. Angelos helped create scouting reports, assisted in on-campus recruiting and helped facilitate summer camps. In addition to working with the Wolverines of Ann Arbor, Angelos also coaches one of the top club teams in the nation, Legacy Volleyball Club.

Angelos came to Ann Arbor by way of William Woods University in Fulton, Mo., where she served as an assistant coach since August of 2014. While there, she was selected as the 2015 AVCA Coaches 4 Coaches Award recipient for her work in helping propel the Owls to a 22-win season. She also coached with the H2 Volleyball Club and at North Callaway High School.

In addition to her coaching experience, Angelos brings a wealth of instructional knowledge to the Huskie program as she provided instruction at All American Camps, Eastside Volleyball Club and Wisconsin Juniors Volleyball Club.

A 2014 graduate of Bradley University, Angelos captained the Braves volleyball team as a junior and senior. As a middle blocker, she also earned All-Missouri Valley Conference honors and conference academic honors, finishing eighth on the all-time career kills list. The Waukegan, Ill., native has ties to NIU as her twin sister, Sarah, was a Huskie from 2010-13.

The Huskies finished the 2016 season 25-6 overall and 15-1 in MAC play to clinch the West division title and a share of the regular season championship. NIU won its first MAC Tournament since 2001 at Victor E. Court to earn its seventh NCAA Tournament appearance in program history.