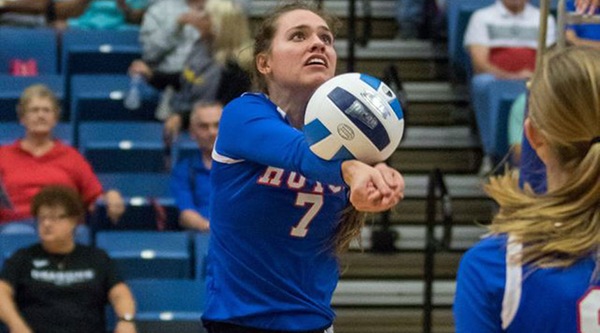 Following a 20-win season, East Carolina is bolstering its 2018 roster with the addition of Page Hiebert, a 2017 National Junior College Athletic Association (NJCAA) All-American. Hiebert will be a junior in 2018 and plans to joins the Pirates in the upcoming spring semester.

Listed as a 6’0″ outside hitter, Hiebert’s last stop was with Hutchinson Community College in Kansas. In her two seasons, she was a two-time first-team All-Jayhawk West Conference pick and amassed 877 kills – third in Hutchinson CC history. Her rise up that ladder this year led to her being named a Second-Team NJCAA All-American.

This past season with the Blue Dragons, Hiebert was with a team that went 27-14 and made the NJCAA Tournament. She was the top option for the attack, with a country best 578 kills and a 4.10 kills per set mark that ranked third in the NJCAA. She tacked on plenty of other big totals too with 379 digs, 60 blocks and 41 aces.

“We are very fortunate to pick up Page in the middle of the year,” East Carolina head coach Julie Torbett said in the team’s release of the news. “Having Page in the spring will be instrumental in her development as a player. Her statistics and accolades at Hutchinson show the caliber of player she is and our high expectations of her come from what she has done at that level. She is also a very bright student and will graduate early from Hutchinson.”

East Carolina is coming off a 22-11 season when they went 13-7 in American Athletic Conference play. They’ll be looking to overcome the loss of five seniors in 2018 though, with a pair being outside hitters. Both started all 33 of the Pirates’ matches too, so Hiebert will have a big opportunity for early playing time in a six-rotation role.