No. 1 Nebraska Breezes Past Montana State 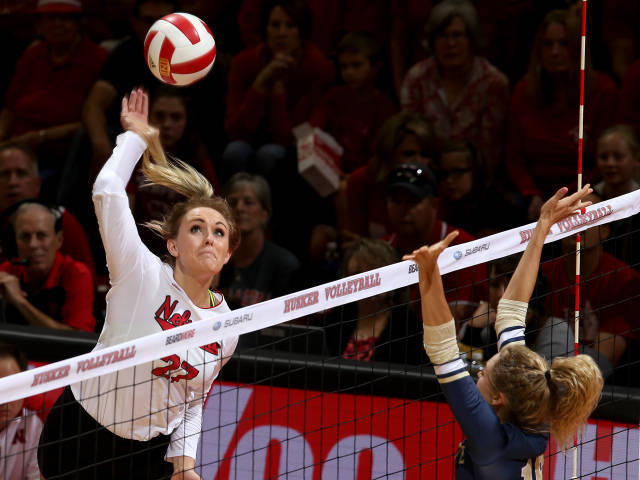 Nebraska was on their game, taking out Montana State in a quick three set sweep. The Huskers hit for a third-best hitting percentage in school history, with an astounding .544 clip, holding the Bobcats to .099.

Olivia Boender recorded a career-high 16 kills on a career-best .727 hitting percentage for the Huskers.  Briana Holman posted another eight kills for the Huskers and three blocks.

LINCOLN, Neb. – The No. 1 Nebraska volleyball team made quick work of Montana State in a 25-15, 25-5, 25-16 sweep on Friday in NU’s first match of the Ameritas Players Challenge. The morning session attendance was 7,922. Creighton defeated Gonzaga, 3-0, in the first match of the tournament.

Olivia Boender fired home a career-high 16 kills on a career-best .727 hitting to lead the Huskers (7-0) to their sixth straight sweep and 23rd straight win. The Huskers hit .544, the third-best hitting percentage in school history, and held the Bobcats (2-5) to .099. Boender’s 16 kills on 22 error-free swings were the second-most kills without an error by a Husker in the John Cook era. Christina Houghtelling (2004) and Melissa Elmer (2005) each posted 17 kills without an error.

Nebraska also got eight kills and three blocks from Briana Holman and seven kills from Kadie Rolfzen. Kelly Hunter had 31 assists and two aces, and Justine Wong-Orantes had 10 digs.

Set 1: Boender had eight kills on 10 attacks in the set to spark the Huskers to a 25-15 win. The Waverly, Neb., native led NU to a .536 hitting percentage in the first frame. Holman chipped in four kills on .500 hitting. Nebraska held a 7-6 lead before taking control with kills by Hunter, Annika Albrecht and Holman to go up 11-6. Boender had three straight kills to boost NU to a 23-13 lead.

Set 2: Nebraska found its rhythm as it built an 11-1 lead. Holman and Kadie Rolfzen each had a pair of kills early on. The Huskers continued to blast away and went up 15-2 on a kill from Amber Rolfzen. Nebraska hit .688 for the 25-5 win, with Boender adding four more kills on five swings to bring her two-set total to 12 kills on .800 hitting. Nebraska held Montana State to -.250 in set two and sided out at a 100-percent clip.

Set 3: The Huskers finished off the sweep leading from start to finish. NU hit .458 in the final frame and posted three blocks, including three by Holman. Boender finished with four more kills on seven swings, while Mikaela Foecke tallied three of her four kills in the last set.

Up Next: The Huskers continue the tournament against Gonzaga at 7:30 p.m. Friday on NET.

The Montana State volleyball team ventured into one of the most formidable venues in the country and competed against the top team in the nation, Friday afternoon at the Devaney Center. And, despite dropping a 25-15, 25-5, 25-16 decision to No. 1 Nebraska, came away with a taste of accomplishment to carry into next week’s Big Sky Conference opener.

“Nebraska is a good team, no doubt about it,” joked MSU second-year head coach JJ Riley. “Our team got an opportunity of a lifetime to compete against the very best in an arena that was the loudest and most packed that we have seen.

“To compete with a team like Nebraska you really have no room for errors and have to play with a laser-like focus all the time,” Riley added. “This is why we came here, to hopefully teach our team what it takes to play at your best.”

Montana State (2-5) got on the scoreboard first on a kill by junior middle blocker Kiana Black. MSU traded points with Nebraska (7-0) and trailed the Cornhuskers 11-9 following another Black winner. Midway through the first set the Bobcats maintained a three-point deficit on an Eli Svisco kill, but the Huskers flexed its muscle with an 11-4 run to take a 1-0 advantage.

“The girls were in a great place and mindset to get after it, which was very good and fun to see,” Riley commented. “But we still need to look back at things we didn’t do so well or execute to keep improving.”

Things didn’t go as planned in the second stanza, as Nebraska out-hit Montana State .688 to -.250.

“I thought Montana State came out playing really well in the first game and you could see how fast their tempo is,” said Nebraska head coach John Cook, during a post-game interview on the Husker Sports Network. “They definitely speeded up from two weeks ago. I’m not sure the ball was getting above the top of the antenna, so it took us awhile to adjust to that.  Of course, when you run that offense, if you don’t pass, it gets ugly real fast and that’s what happened in game two. And, game three, Montana State continued to compete.”

In the final set, MSU trailed 14-12 after a Dana Vestman service ace. But again, a combination of Nebraska hitting and Bobcat miscues turned into an 11-4 run giving the Huskers the victory.

Montana State was paced by Svisco with six kills and Black with five kills, a .375 attack mark, two aces and a block. Defensively, the Bobcats were led by freshman libero Allyssa Rizzo with seven digs.