No. 14 Hawaii Fights Past Cal Poly To Win Marathon Match 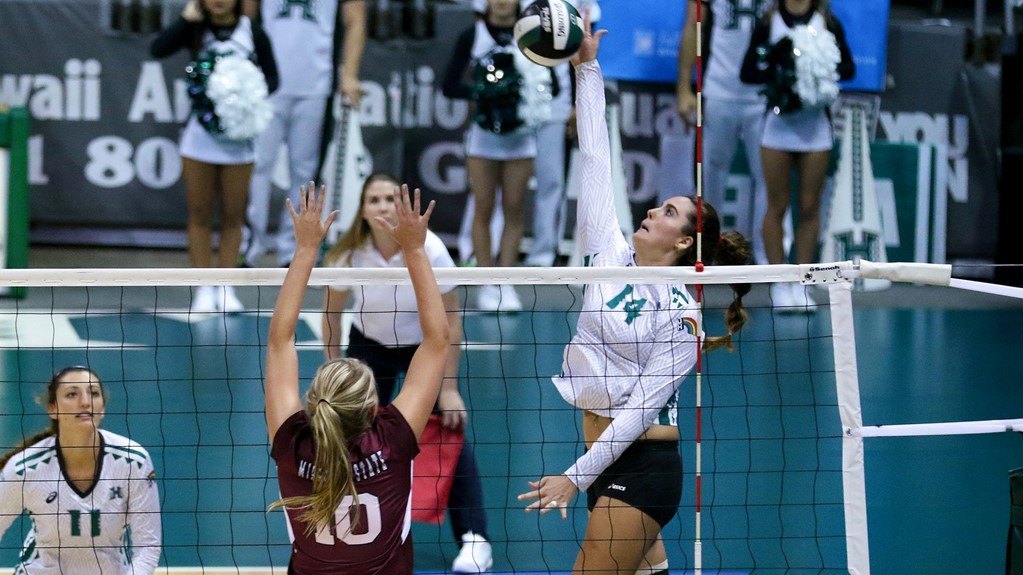 Mustang Taylor Nelson led the team with 17 kills, while Raeaann Greisen was close behind with 16 kills. Katherine Brouker picked up 20 digs.

SAN LUIS OBISPO, Calif.—The No. 14 University of Hawai’i women’s volleyball team (9-4, 2-0 Big West) dropped a marathon first set but battled back to win the next three to defeat a scrappy Cal Poly squad, 32-34, 27-25, 25-17, 25-20. For the second time this season, four Rainbow Wahine notched double-digits in kills, led by Nikki Taylor who pounded a match-high 25. Emily Maglio led all players with eight blocks and Norene Iosia dished out a career-high 58 assists en route to the victory. As a team, the ‘Bows posted a season-high 14.0 blocks on Saturday night at the Robert A. Mott Athletics Center in San Luis Obispo, Calif.

Taylor started off with a bang, notching 10 kills in just the first set alone. She hit .268 for the match with 10 errors in 56 attacks. She also tied her season-high with seven blocks—four coming in the final frame—and recorded six digs and a service ace. Taylor tallied 30.0 points for the second time this season and its the fourth time this season that she has had 20 or more kills.

McKenna Granato added 15 kills with just two errors in 34 swings for a team-high .382 hitting percentage. She tied her career-high with three service aces while also adding five digs and a block.

Annie Mitchem recorded a career-high six blocks against the Mustangs and posted 12 kills while Maglio added 10 kills with only two errors in 21 attempts for a .381 hitting percentage. Libero Savanah Kahakai anchored the backline, with a match-high 23 digs—tying her career-high for the fourth time this season.

Iosia notched her sixth double-double of the season, with her 58 assists with 12 digs. she also had two blocks plus a service ace en route to the win.

The second set saw both teams trade leads early on, but UH took a five-point lead at 21-16 scoring six straight with Kahakai behind the service line, capitalizing on five Mustang hitting errors. But once again, Cal Poly fought their way back to catch the ‘Bows at 22-22. The score was then tied at 23, 24, and 25 before the ‘Bows were able to get back-to-back kills by Taylor to capture the second set 27-25 and knot the match at 1-1.

The fourth set was tight early on but the Mustangs tied it at 10-10 and held the lead through six ties until 18-18. Granato then went on a serving run in which Cal Poly committed three attack errors with a service ace in between which allowed the ‘Bows to take a 21-18 lead. Hawai’i closed out the set scoring four of the last five points to win, 25-20.

Cal Poly was led by Alexis Clewis and Raeann Greisen who had 17 and 16 kills respectively. Taylor Gruenewald had five blocks while Katherine Brouker posted 20 digs to lead the Mustangs. The Hawai’i defense was able to hold Cal Poly’s leading hitter Adlee Van Winden to just six kills and a -.133 hitting percentage.

For Hawai’i, it marked their 23rd consecutive conference win and their 14th-straight Big West road win. The ‘Bows have now won 12 consecutive matches against Cal Poly. The last time the Mustangs defeated UH was on Sept. 14, 2006 in a five-set loss in Honolulu when UH was still a member of the Western Athletic Conference.

The Rainbow Wahine return to Honolulu to host their conference home opener at the Stan Sheriff Center on Friday, Sept. 30 against Cal State Fullerton at 7:00 p.m. and Sunday, Oct. 2 against UC Riverside at 5:00 p.m.

SAN LUIS OBISPO – The Cal Poly Volleyball team put up a fight at its home opener against No. 14 Hawai’i Saturday night, but fell short, finishing the match 3-1.

The Mustangs came out strong in their first set, as they were neck and neck from the start and beat the ranked team 34-32.

Junior Taylor Nelson had 17 assists and two kills in just set one. Junior Raeann Greisen led set one in kills with six, while sophomore Alexis Clewis had five.

Clewis led the team in kills for the match, putting up 17, while Greisen put up 16.

Nelson led the team in assists with 42.

Sophomore Katherine Brouker led the team in digs with 20, while sophomore Adlee Van Winden and Greisen both had 10.

The Mustangs are now 7-5 on the season and 0-1 in conference play.

The team will be back on the road next weekend to take on Long Beach State on Friday Sept. 30 and CSUN on Saturday Oct. 3.