No. 14 Kentucky Holds On for Five-Set Win Over UNI 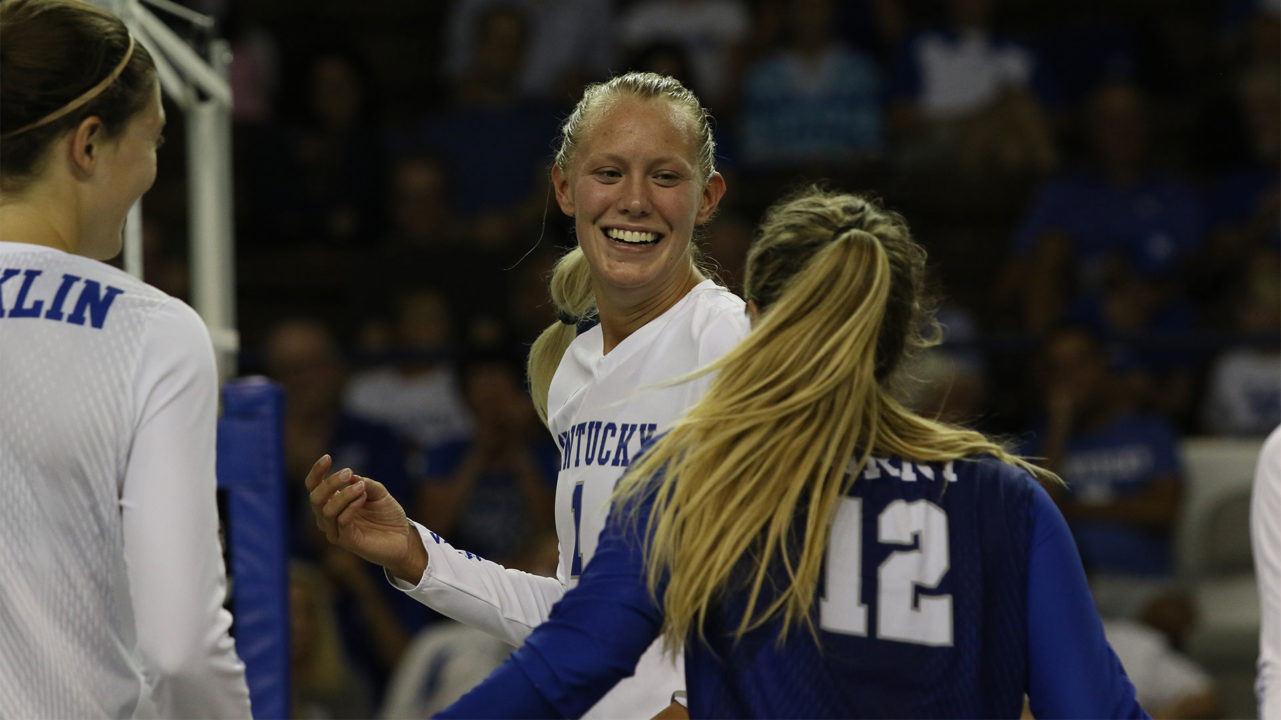 OMAHA, Nebraska – No. 14 Kentucky (AVCA 13) got double-digit kill efforts from four players and posted a .316 team hitting percentage and 11 blocks to hold on for a five-set win over Northern Iowa on Saturday morning.

The Panthers could not get out of their own way in the decisive fifth set, committing five hitting errors and two service errors, whil allowing the Wildcats eight kills and a .350 hitting effort. UK went up 4-1 early with help from two UNI miscues. An Edmond kill put the Wildcats on top 7-2. Northern Iowa narrowed the gap to two at 9-7, but Kentucky closed out the win with six of the final eight points. Three UNI errors coupled with two kills and a block by junior opposite Brooke Morgan sealed the victory.

Sophomore outside Karlie Taylor scored a match-high 28 points for UNI, and round out a double double with 14 digs, but it was not enough to lift her side to victory. Junior outside Bri Weber also managed a double double with 14 kills and 14 digs, while junior middle Piper Thomas contributed 13 kills to the Northern Iowa attack. Redshirt senior setter Heather Hook put up a team-best three blocks, while junior libero Kendyl Sorge managed a team-leading 25 digs.

UNI got off to a strong start in the match with a .486 hitting effort in Set 1. Kentucky managed a .324 clip, but could not overcome 21 Panther kills in the stanza. The teams split the first 10 points, before UNI took a 10-7 lead on a Moriah Johnson kill. The Panthers upped their advantage to five at 15-10 with kills by Taylor, Johnson and Jadlin Seehase. Up just one at 17-16, Northern Iowa gained some separation with a 4-0 run, incluidng two more Taylor kills. In the end, putaways by Seehase and Taylor clinched the 25-20 Panther victory.

Kentucky hit .452 in the second set, committing just one team hitting error. The Wildcats scored the first three points of the stanza and pushed the margin to five at 16-11 midway through. A kill and an ace by Lilley gave UK the five-point edge. The Panthers would get no closer than three the rest of the way. Kills by Brozwn and Franklin evened the match at a set apiece.

The teams split the first 10 points of Set 3. Kentucky scored five of the next six including two kills and a block by Franklin to go up 10-6. By the midway point, the teams were knotted again at 14 and 15. The Wildcats rallied with five straight points, capped by a solo block by Edmond, to make it 20-15. The Panthers would get no closer than three the rest of the way, eventually falling 25-20 on a Skinner kill.

Northern Iowa extended the match, capitalizing on 10 Kentucky miscues in Set 4. Six hitting errors, three service errors and a ball handling error plagued the Wildcats. The teams were level through 24 points in the set, before UNI pushed ahead by three at 16-13 with help from a kill and a block by Thomas. With the Panthers up just two at 21-19, Thomas turned it on with two kills and a set-clinching block with Hook, to closed out the 25-20 win.

UNI sophomore Karlie Taylor notched a career-high 28 kills, which marked the fourth 20-plus kill effort she has recorded this season. Taylor also posted her fourth double-double of the year with 14 digs. Taylor’s 28 kills is the most for a Panther in a match since Molly O’Brien had 29 kills vs. Creighton on Sept. 21, 2002.

Senior Heather Hook registered her 3,000th career assist in the matchup vs. the Wildcats. Hook had 61 assists – marking the second time this season she had surpassed the 60-assist mark in a match.

Junior Kendyl Sorge secured her third 20-plus dig performance on the year. Sorge worked the back row as she tied for match-high honors with 25 digs.

UNI (4-1 overall) will take to the floor again later tonight at 8 p.m. against tournament host Creighton at D.J. Sokol Arena.