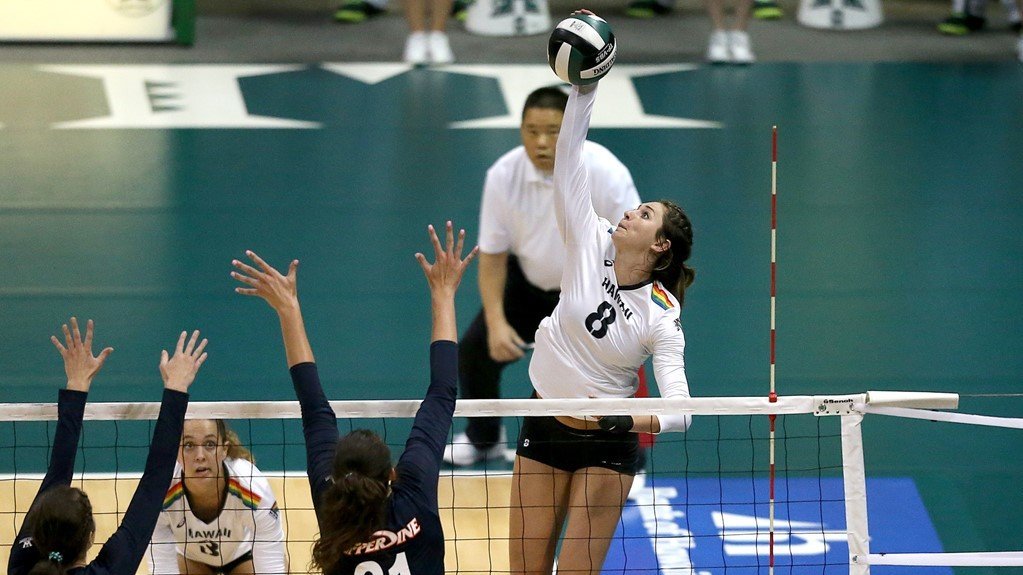 After a tight first set, Hawaii destroyed Pepperdine the second set 25-6 and eventually rolled to an easy win in the first of a two-match set against Pepperdine.

Nikki Taylor posted her third double-double of the season for Hawaii putting down 13 kills and a match-high 11 digs, while also recording a career-high seven service aces.

HONOLULU—The University of Hawai’i women’s volleyball team (6-4, 0-0 Big West) got off to a slow start but then hit the afterburners to sweep Pepperdine, 29-27, 25-6, 25-18 on Friday night at the Stan Sheriff Center with a crowd of 6,668. Nikki Taylor recorded her third double-double of the season and ripped a career-high seven service aces to lead Hawai’i while senior Annie Mitchem buried 10 kills in her 2016 debut.

Taylor tallied a match-high 13 kills and a match-high 11 digs to lead the ‘Bows. It marked the 17th time in her career that she’s recorded a double-double. Her seven aces was the most since Tayler Higgins had eight aces against New Mexico on Sept. 4, 2014. Taylor is now ranked No. 16 in UH’s all-time career kills list passing Maja Gustin (2000-03) who had 1,111. Taylor now has 1,123 kills in her four-year career.

Mitchem, who played for the first time in 344 days after missing the last 12 matches last season and the first nine matches this year due to injuries. She made an immediate impact on the team. She played for the first time in her life as a left-side hitter in place of Kirsten Sibley who has been out with flu-like symptoms for much of this week. Mitchem hit .320 with 10 kills and just two errors in 25 attacks. She also was in on one block and popped up three digs in the match.

Middle hitter Emily Maglio was very efficient, hitting .750 with 12 kills and no errors on 16 swings. She also added three blocks and set up the blocks well for the defense while also adding  a dig and an assist to fill her stat line.

Norene Iosia posted her fourth double-double of the season with 33 assists and 10 digs. She also added two service aces to bring her season total to 14.

In the first set, Hawai’i got out to an early four-point lead at 8-4, but Pepperdine would rally back, tying the score at 10-10 to start a 6-0 run which pushed the Waves out to a 14-10 lead behind the jump-serving of Hannah Frohling. Later in the set, Pepperdine looked to be in control, serving for set-point at 24-19, but then Hawai’i began their epic battle back. The comeback started with Taylor behind the service line. She ripped her first ace of the night and followed that with a pair of kills flying in from the back row. The Waves then called timeout, but Mitchem kept the momentum going with a kill of her own to knot the score at 24-24. UH and Pepperdine would tie three more times before UH finally was able to take a 28-27 lead off Taylor’s ninth kill of the first set and then UH ended it on an Iosia service ace to win 29-27. In all, UH staved off set point seven times to survive.

Hawai’i brought that momentum into the second set where once again began behind the serving of Taylor, UH jumped out to an 8-0 lead. Hawai’i scored 11-straight points from the end of the first set through the beginning of the second. Taylor pounded four-straight aces to start the set and added another after a Pepperdine attack error. Shortly after, Higgins reeled off six serves with three consecutive kills by Maglio and one by McKenna Granato to give UH a 14-2 lead. Katiana Ponce ended the second set with her first ace of the season and eighth of her career. Hawai’i won the second set, 25-6 in the most lopsided set win since UH won 25-5 in set three at UC Riverside last season on Oct. 3, 2015.

The third set started much like the second, with Hawai’i racing out to a 5-0 lead from which the Waves could never quite recover from. Taylor started again from the service line, picking up her seventh and final ace of the match. UH ended the match winning six of the last seven points to take the third set, 25-18.

Pepperdine (6-5, 0-0 West Coast) was led by Nikki Lyons who had 10 kills. Jasmine Gross had a match-high four blocks and Heidi Dyer had seven digs to lead the Waves.

Hawai’i will face Pepperdine once more on Saturday, Sept., 17 at 7:00 pm. The UH match will follow the annual Alumnae Game which will be starting at 5:00 p.m.

HONOLULU, Hawai’i — The Pepperdine women’s volleyball team fell in straight sets to the 15th-ranked Rainbow Wahine of Hawai’i at the Stan Sheriff Center this Friday night.

Pepperdine started the night hitting .429 after the fourth set with 20 kills and only two errors on 42 swings.  The Waves finished the night with a .225 hitting percentage and 36 kills, while adding 4.0 team blocks, 36 digs and an ace.  The home team excelled on the offensive, posting 11 aces on the night, along with a .350 attack output and 45 kills.

The first set was exciting for both sides, beginning with a small 6-3 run by the Rainbow Wahine to gain an early edge.  Shortly after, the Waves went on a 7-4 run of the team’s own to tie the match at the 10-10 mark.  Pepperdine then pulled ahead to a 143-10 lead after a very successful outing at the service line by Frohling, including an ace, three kills from Harris and two from Lyons.  The advantages weren’t over for the Waves, as the team advanced to a 24-19 lead, looking down the home stretch.

Hawai’i would give no letup, however, and after eight-consecutive failed set-point win opportunities by the Waves, the Rainbow Wahine took over the edge and won the first set on an ace, 29-27.

The second set did not prove as exciting for the visiting Waves as it began with five-straight service aces from Hawai’i’s Nikki Taylor, interrupted only by a Waves’ attack error, putting UH up 8-0 to start.  Pepperdine picked up a few points throughout the set, but the home team was determined and advanced to a 2-0 advantage on the night after a 25-6 set victory.

After the tough second set, the Waves had a difficult pulling back into the match.  The Rainbow Wahine began the set with a 5-0 advantage and stretched the lead late into the set at the 15-12 mark.  Late, Dyer with a pair of kills, attempted to close the gap for Pepperdine, but the home team won the set 25-18 for the straight-set victory.

Hawaii went 2-0 against Pepperdine for the weekend, each team concluding non-conference play.

Hawaii starts their Big West Conference, looking to defend their 2015 title, taking on UC Santa Barbara Sept. 23 at 7pm. Pepperdine will face Loyola Marymount next on Sept. 24 at 1pm.

Granato hit .344 for the night, with just six errors on 32 swings. She was just one dig shy of recording her second double-double of her career with nine digs. She also had a block, an assist and a service ace.

Maglio continued her high-percentage hitting, recording eight kills with just two errors on 17 attacks for a .353 hitting percentage. She was just one block shy of tying her career-high of nine set earlier this season against Pacific (Sept. 2).

Senior Annie Mitchem once again played on the leftside and buried a career-high 11 kills, hitting .226 with four errors on 31 attempts. She also tied her career-high with two service aces  while picking up two blocks and three digs in just her second match back from injury.

Redshirt freshman Natasha Burns came off the bench to play middle and she tallied a career-high five blocks and was just one kill shy of tying her career-high with five kills as well.

Fellow freshman, setter Norene Iosia recorded her fifth double-double of the season with 44 assists and 12 digs and also posted a career-high with five blocks.

The first set was tight early on, but a Mitchem and Maglio block sparked a 6-0 run with Taylor behind the service line (which included a pair of aces) to extend their lead from 14-12 to 20-12. Clare-Marie Anderson then served the final four points of the set to take the frame going away, 25-14.

In the second set, UH was very efficient, siding out on 16-of-19 opportunities for an 84% rate. Hawai’i did not score in bunches, but slowly pulled away to win the set, 25-18. Both Taylor and Mitchem led UH with five kills apiece in the set.

Hawai’i led throughout much of the third set and was on cruise control, leading by as many as six points at 16-10. But the Waves would make a run at the end while UH was unable to close out the set. Pepperdine scored nine of the last 11 points to steal the set from Hawai’i with Nikki Lyons going on a four-point serving run at the end to give the Waves set point. UH then served into the net to fall in the third, 25-23.

The Rainbow Wahine, however, regrouped and came out firing in the fourth set. Mitchem went on a seven-point serving run to give the ‘Bows a 10-2 lead from which Pepperdine was unable to recover from. Hawai’i pulled away in the fourth to win, 25-12.

Hawai’i now hits the road to open play in the Big West Conference  as they begin to defend their 2015 title. UH will take on UC Santa Barbara, who has the best record in the conference at 9-4 first on Friday, Sept. 23. UH will then face Cal Poly (7-4) on Saturday, Sept. 24. Both matches are slated to start at 7:00 p.m.

The Waves posted a .106 hitting percentage throughout the night with 36 kills, while also posting four aces and five team blocks.  The Rainbow Wahine were successful on the offensive with a .289 success rate after 56 kills, 11 aces and 16 team blocks.

The match was close to start in the first set as both times amassed a 9-9 lead early.  After the tie, the Rainbow Warriors, fueled for the second night in a row by Nikki Taylor, went on an 11-3 run to put up a 20-12 advantage in the first set.  The home team then closed out the set in the next rotation with a 25-14 victory.

The teams began point-for-point again in the second set, working to the 9-9 mark again before Hawai’i pulled ahead.  After quick exchanges back-and-forth, with the Rainbow Wahine gathering leads, the home team went 16-9 to close the set with a 25-18 win.

Hawai’i worked ahead early in the third set, amassing a 16-10 lead in the middle of the set.  Working at an advantage, the Waves began to gain some momentum with the help of Tunnell and Lyons at the service line, tied the match at the 22-22 mark.  Lyons had five total serve attempts to help Pepperdine to a 25-23 win, putting the match at 2-1 on the night.

After falling behind at the end of the third set, the Rainbow Wahine came out strong in the fourth, posting a 10-2 lead early on.  The Waves were unable to crash the home team’s momentum and Hawai’i pulled off a 25-12 final set victory for the 3-1 win.