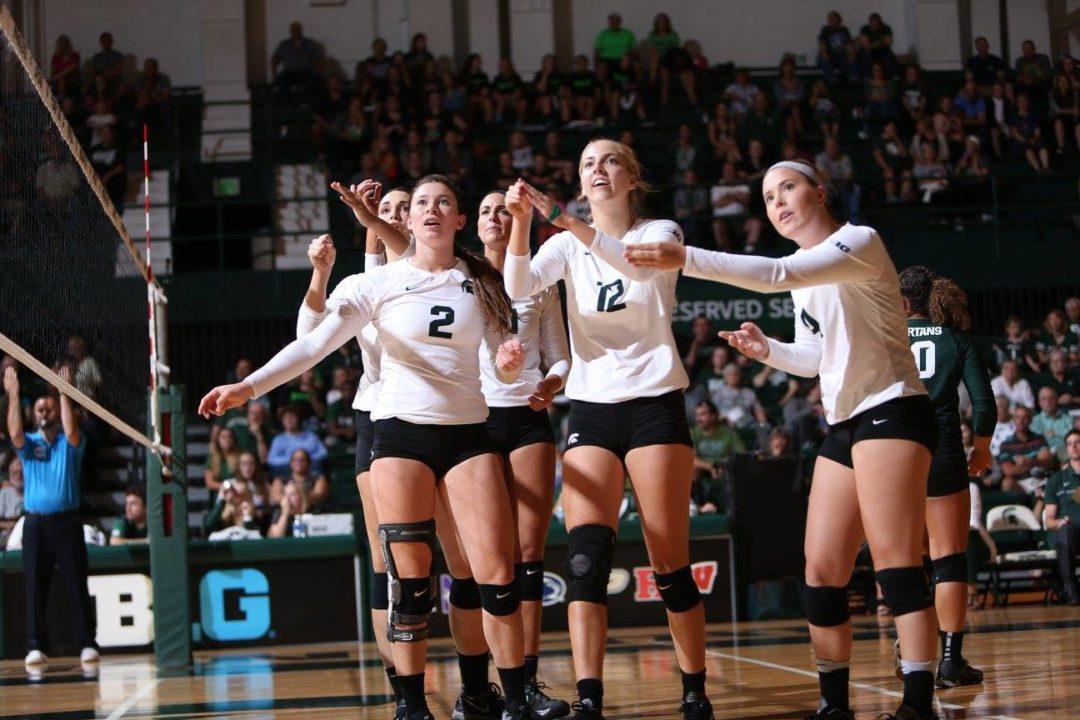 The tight match had 25 score ties, and the Blue Demons lost by just two points in the final two sets. Spartan player Autumn Bailey was named Tournament MVP, with 9 kills, 1 ace and 5 digs against DePaul.

Michigan State jumped to a 7-2 lead in the first set, and controlled the game by keeping a consistent 5-point lead over DePaul through the set. The Blue Demons couldn’t seem to get going, leaving the Spartans open to claim a 13-lead for the final set point.

DePaul stepped it up in the second and third sets. Although Michigan State was able to take their biggest lead in the second game 21-15, DePaul’s service run from Caitlyn Coffey helped the Blue Demons come within a point of the Spartans. Michigan State only won by a two-point margin.

DePaul claimed its first lead in the match, with a 7-3 lead to open the third set. MSU had a 3-point run, but some unforced errors let DePaul answer and tied the score 15-15. Michigan State slid by with a win to end the tournament, but they got lucky- 7 of the total 11 errors the Spartans made in the match were committed in the third set.

SPARTAN SYNOPSIS
No. 22 Michigan State improved to 11-1 on the year and captured the Spartan Classic title with a 3-0 win over DePaul (25-12, 25-23, 25-23) on Saturday evening. DePaul falls to 6-6 on the year and finishes third in the Spartan Classic field with a 1-2 weekend record; Notre Dame finished second with a 2-1 weekend mark and Maryland-Eastern Shore fell in all three matches they played.

The Spartans were led in the match by Holly Toliver’s double-double, hitting .435 (10-0-23) with two aces, 12 digs, and three blocks. Brooke Kranda abnd Autumn Bailey each had nine kills, with Kranda adding a season-best five blocks. Alyssa Garvelink hit .455 (6-1-11) and tied her season high with seven blocks.

The Spartans out-blocked their guests 10-4, and dialed up a season-best 11 service aces for the second straight game and third time this year. MSU hit .326 on the night, committing just 11 errors (four in the first two sets combined before seven in the third frame).

The match featured 25 tie scores and 14 lead changes between the teams, as the scrappy Blue Demons overcame a .040 hitting percentge in the first set to hit .429 in the second. DePaul had 38 digs to MSU’s 27, and fell by just two points in each of the final two sets.

Autumn Bailey earned Tournament MVP honors, posting nine kills, an ace, and five digs vs. the Blue Demons. On the weekend, the outside hitter averagd 4.22 kills per set and hit .405, adding eight service aces (0.89 per set) and 1.78 digs per set. Joining her on the All-Tournament team was teammates Garvelink and setter Rachel Minarick., as well as setter Colleen Smith of DePaul, who had a double-double with 19 assists and 12 digs.

Quotable:
“I thought we let things get away from us a bit in the second two sets, and that can’t happen in a Big Ten match if we don’t want to pay for it dearly. We actually hit the ball really well in sets one and two. I thought that our offense was pretty balanced, and our serving game again was strong. In all, I think we have to be pleased with an 11-1 non-conference record, but we know that we start back at 0-0 on Monday when we start preparing for our Big Ten opener.”
— Head Coach Cathy George

Colleen Smith closed the weekend with a double-double for the Blue Demons with 19 assists and 12 digs. Smith was named to the All-Tournament Team at the end of the night.

Brittany Maxwell tied for the match-high in kills with 10. Maxwell and Caitlyn Coffey recorded a team-high three total blocks each.

Returning to the court on short rest, DePaul opened the match against Michigan State with a 3-3 tie. The Spartans recorded the next five points to grab the advantage. As the set continued, MSU built on its lead and eventually won the opening frame, 25-12.

The second set featured a strong answer from the Blue Demons. DePaul and Michigan State battled throughout the frame early that featured 12 ties and a score of 15-15. After this point in the set, MSU went on a 6-0 rally, but DePaul battled back. The Blue Demons rallied for four straight points, thanks to two Coffey service aces, and were back in the set, only down by two. Later in the frame, Jasmine King secured a kill that cut the deficit to one, 24-23, but the Spartans answered with set point.

Much like the second set, the third set featured tight play between the two teams. A total of eight ties early in the frame had neither side jumping out to a lead larger than three. With the score set at 15-all, the Spartans produced a 3-0 rally and held the lead late into the frame. Down by three at 21-18, a clutch 5-1 run by DePaul gave the Blue Demons the lead. The Spartans closed the set on a 3-0 rally and won the match.

Saturday marked the end of the non-conference slate for the Blue Demons. DePaul now looks to BIG EAST play when the Blue Demons open at Providence on Sept. 23 at 6 p.m. CT.

Before the game, senior Chloe Reinig was recognized for earning 1,000 career kills, becoming the first Michigan State player to achieve the milestone since 2013, and the 21st player overall to earn the honor.

The Spartans kept a comfortable lead through the beginning part of the first set. MSU’s offense was crushing Notre Dame, with just two errors in the first set overall. The kills the Spartans were racking up showed in the score- they led 16-10, and quickly 22-16. MSY closed it out with more kills to claim the 25-17 win.

Notre Dame lost an early lead in the opening of the second set, but after a well-placed timeout, the Irish were able to come back to tie the score 6-6. The Spartans had a 6-0 run that had the Irish scrambling to stop their momentum. Michigan State pushed its lead to 19-10, and only allowed Notre Dame 3 more points in the set.

The Fighting Irish leapt to an 8-5 lead in the third set, but gave the Spartans a sideout to seal their fate. MSU tied up the game, and continued with a 12-3 run. Although the Irish tried to mount a small run, but they couldn’t fight off match point.

SPARTAN SYNOPSIS- Michigan State took down Notre Dame in straight sets (25-17, 25-13, 25-19) on Friday evening in their first game of the Spartan Classic at Jenison Field House. The Spartans improve to 9-1 on the season, while the Irish fall to 7-3.

The Spartans came out of the gate with hot hands, hitting .519 in the opening set, and hit .367 for the match – their season high. The Spartans held the Irish to just .086 for the match, the sixth opponent held to a .100 hitting percentage or lower. MSU also served up nine service aces and had 41 digs, getting three players with seven digs or more.

Prior to the game, senior Chloe Reinig was honored for surpassing 1,000 career kills, She is the first Spartan to reach that milestone since Lauren Wicinski in 2013, and the 21st player in program history.

MSU is back in action for its final non-conference matches of the season on Saturday, taking on Maryland-Eastern Shore (11:30 am) and DePaul (6 pm) at Jenison Field House.

Quotable:
“I was really pleased with much of what we did tonight. I thought it really all started from our serve – we were aggressive and served well, and that led to a lot of opportunities for us throughout the match. We obviously hit really well, too – and it was nice to see some of our players break through with a good night. We’ll have to turn this around quickly to play two matches tomorrow, but the focus will continue to be on what we do and tightening up some things that we’d like to see executed a bit better.”
Head Coach Cathy George

Up Next: The Spartans will face DePaul in the final non-conference match of the season.

EAST LANSING, Mich. — Notre Dame fell to No. 22 Michigan State on Friday evening in East Lansing by a final score of 3-0. The loss snaps a season-best four match win streak and moves the team’s record to 8-3 on the season.

The Irish struggled to find their rhythm from the opening serve on Friday evening, as Michigan State jumped out to an early lead to take control of the match. The Spartans recorded a 25-17 first set victory and then used their momentum to take the second set by a final of 25-13 to go up 2-0 in the contest.

Notre Dame gained an early advantage in the third set at 8-5 but was unable to sustain the success, as Michigan State scored the next four points to force a timeout from the Irish. Notre Dame battled the Spartans for the remainder of the stanza but came up short, falling by a final of 25-19.

Caroline Holt handed out 23 assists and recorded five digs and a kill in the contest. The junior notched assists on 23 of Notre Dame’s 25 kills.

A Jemma Yeadon kill knotted the second set score at 6-6 after the Irish dropped the opening set. Michigan State immediately responded by reeling off six straight points of its own to take control of the second set and put the Spartans in the driver’s seat for the victory.

The Irish wrap up their stay in East Lansing against DePaul on Saturday at 1 p.m.

Notre Dame then returns to the Joyce Center on Friday, Sept. 23 for the ACC opener against Louisville at 7 p.m.

Tickets are available by visiting UND.com/BuyTickets.