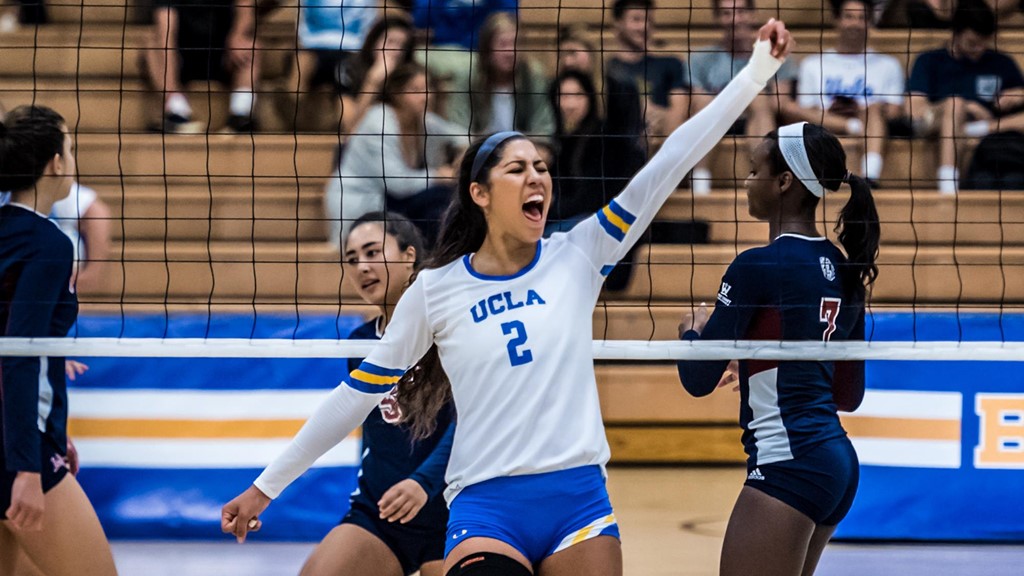 No. 15 UCLA ran a balanced and efficient offense Friday night, hitting .308 as a team as four players posted double-digit kill efforts in a four-set win over No. 8 Oregon. Archive Photo via UCLA Athletics

LOS ANGELES – No. 15 UCLA ran a balanced and efficient offense Friday night, hitting .308 as a team as four players posted double-digit kill efforts in a four-set win over No. 8 Oregon.

Sophomore middle blocker Madeleine Gates led the way with 17 kills, hitting at a team-best .586 clip, with no errors in 29 swings, while also chipping in a team-high six blocks. Senior outside hitter Reily Buechler (12), freshman outside Mac May (12) and freshman outside Jenny Mosser (11) followed. Buechler tallied a double-double, rounding out her effort with 10 digs and three blocks. Senior setter Sarah Sponcil did it all for the Bruins, leading the team in digs with 19, while also dishing out 47 assists, notching three kills of her own and serving up an ace. Junior libero Zana Muno joined Sponcil and Buechler in double-digit digs with 13.

Junior outside Lindsey Vander Weide paced Oregon with a near double-double, tallying 15 kills, hitting .343 and adding a team-best nine digs and three blocks. Sophomore right side hitter Willow Johnson (11), senior right side Taylor Agost (10) and sophomore middle Ronika Stone (9) followed. Stone put up at a team-best seven blocks and served up two aces, while hitting at a .412 clip. Ten of the 11 Bruin players that saw action tallied two or more digs, with Vander Weide leading the way with nine.

The Ducks put up six blocks in Set 1, while adding two aces and a .235 hitting effort in a 25-19 win. Oregon jumped ahead 6-0 as Johnson downed two kills and Stone notched a kill and a block. The Ducks soon led by seven at 16-9 as Stone chipped in two kils and two blocks. The teams swapped points leading to a 20-13 Oregon lead, but UCLA battled back with five straight points, including two Duck miscues, to narrow the gap to two at 20-18. Up 21-19, Oregon closed out the set with four straight points, including kills by August Raskie, Stone and Agost.

The Bruins committed just two hitting errors in Set 2 for a .480  effort to overcome an early 6-1 deficit. Four players posted kills and Jolie Rasmussen served up an ace to put the Ducks on top in the early stages. UCLA rallied to knot the score at 11, with help from three Oregon miscues and two aces. The teams tied at 12 and 13 before a Sponcil kill gave the Bruins their first lead at 14-13. UCLA scored 11 of the final 16 to notch the 25-18 win. Five of the points came on Duck errors, while Mac turned in three kills.

UCLA carried the momentum into Set 3, jumping ahead 5-0 and carrying on to a 9-2 advantage as Buechler registered four kills. Oregon was back within three at 13-10 after a trio of Agost kills and an ace by Alex Hojnar. The Bruins countered with six of the next eight points to take a 19-12 lead. Two kills and two blocks by Gates gave UCLA the edge. Down 23-16, Oregon managed three straight points, including another Hojnar ace to cut the deficit to four at 23-19. Kills by Krya Rogers and Buechler, however, capped the Bruin victory.

The teams tied 13 times in Set 4, last at 15-all. UCLA broke away with a 5-1 run, including two Rogers kills and a Mosser ace to make it 20-16. Down 23-18, Oregon mounted a comeback, scoring three straight with kills by Johnson and Vander Weide and a stuff by Agost and Sumeet Gill. A service error and a Gates putaway clinched the 25-21 Bruin win and the match.