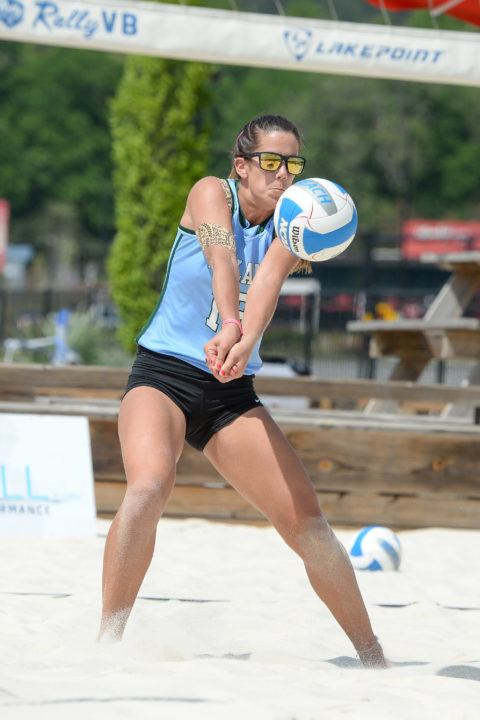 NEW ORLEANS – No. 19 Tulane beach volleyball welcomes in a bevy of teams to its home court as it prepares... Current Photo via Todd Drexler, CCSA Photos

NEW ORLEANS – No. 19 Tulane beach volleyball welcomes in a bevy of teams to its home court as it prepares to host the Green Wave Invitational on Saturday and Sunday at White Sands. The Green Wave will play five duals – three on Saturday, two on Sunday – over the two-day competition, celebrating Senior Day and honoring the careers of seniors Madeline Mertz, Lan Nguyen and Christina McAfee in the dual against UNO to wrap up the weekend.

The duals are free to attend. Live scores are available online, and a live stream of the action is provided at TulaneGreenWave.com.

Cox Sports Television will broadcast each day of the action. A programming schedule is available online.

QUOTES
“It’s exciting for the players to be playing at home. It provides an energy boost, and that’s something we’ll always take. It’s a good schedule up and down. There’s a lot to play for, and we’ve got so much on the line. We need to gobble up conference wins and get better.”

“To play LSU is certainly a highlight because it’s a good team, there’s a close geographic rivalry and it’s a conference opponent we need to go through if we want a chance to play in the NCAA tournament. There’s a lot of reasons to be motivated for that match. They got us last time, but we’re absolutely confident that we’ve gotten better since then, and we’ll be ready to go out there and play them tough. Central Arkansas is tall and big. We’ve played them before and were able to get a good result against them. HBU always plays us tough. Good players, a really well-coached team.”

“Our three seniors were the first three girls I recruited here. It’s exciting for them to go out and compete on the home court. Home means more than just the city you’re in. I look forward to giving them a thank you for everything they’ve done, seeing them play and walking off of the New Orleans sands for the last time.”
-Head Coach Wayne Holly

PROTECT THE HOUSE
Tulane returns to the friendly confines of White Sands this weekend to defend its home court and host the Green Wave Invitational. Houston Baptist, in-state rival and conference foe No. 8 LSU, Central Arkansas, conference opponent No. 12 Grand Canyon and crosstown rival UNO are set to square off against Tulane in the two-day competition.

The Green Wave open their weekend with a tripleheader. Tulane first takes on HBU at 9:30 a.m. Saturday before facing No. 8 LSU and UCA at 12:30 p.m. and 5 p.m., respectively.

The second day of the competition rolls on at 9:30 a.m. Sunday, as the Green Wave will play No. 12 Grand Canyon. Their invitational concludes with a dual against UNO, which is set to begin at 5 p.m.

LAST TIME OUT
The Green Wave made its first regular season appearance at White Sands Volleyball Courts since 2016 this past Wednesday, when they welcomed in ULM for a midweek doubleheader. Tulane protected its home court, winning both duals of the doubleheader.

The Green Wave won the first dual, 5-0, before picking up a 4-1 victory in the second. Tulane dropped just two sets across five flights en route to the 5-0 win against ULM to open the day.