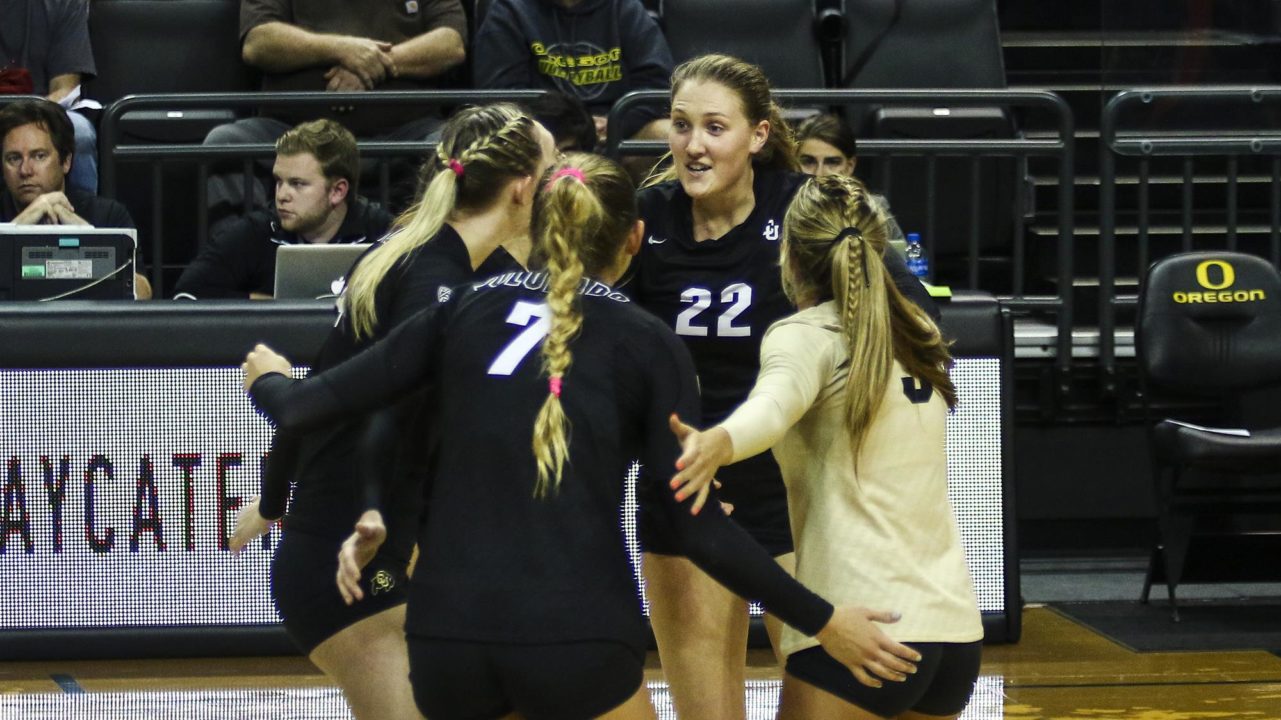 No. 23 Colorado held Washington State to a negative hitting percentage, forcing 30 miscues, while allowing just 28 kills in a home sweep, which evened the season series.  Current Photo via Colorado Athletics

Taylor Mims accounted for nearly half of the Washington State offense with 13 kills, but hit just .023 in the match with 12 errors. The junior outside also added seven digs and two blocks. Senior opposite Casey Schoenlein followed with eight kills, but committed seven errors, hitting .038. Redshirt sophomore middle Jocelyn Urias put up at a team-best seven blocks, while sophomore libero Alexis Dirige managed 13 digs to pace the backcourt.

The teams played to a 7-all tie in Set 1 and remained close until the Buffs built a four-point lead at 16-12. Shebby and Hayes contributed two kills each in a 4-1 run to gain separation. Three blocks by DeLuzio and Abu pushed the Colorado advantage to nine at 22-19. A Mims kill slowed CU momentarily, but the Buffs closed out the stanza with three straight points, two on kills by Shebby and Pfefferle and the last on a stuff by DeLuzio and Pfefferle.

The Buffaloes carried the momentum into Set 2, racing out to a 6-1 lead with help from two Smith kills and three WSU miscues. Three players turned in kills as Colorado upped the margin to eight at 10-2. The Cougars answered with a 8-2 run, capitalizing on three Antoine-Dillon stuffs and two Buff errors, to pull within two at 12-10. Up two at 14-12, Colorado surged ahead with seven straight points, five on WSU errors. Schoenlein notched a kill to snap the streak, but the Cougars committed three more errors to give the Buffs a set-point try at 24-14. Two blocks by Urias and a kill kept the Cougs in it, but a hitting error wrapped up the stanza at 25-17. WSU tallied just seven kills in the stanza, while committing 15 hitting errors.

Washington State scored the first three points after intermission, but the teams were soon tied at 6-all, starting a series of six knotups in Set 3. After the final tie at 12-all, Pfefferle heated up with a pair of kills and Smith added two as Colorado went up 16-12. WSU called timeout and scored six of the next eight out of the break to knot the score at 18. The rally was kicked off by a 4-0 run and aided by three Buff miscues and two Schoelein kills. Colorado answered with four of the next five points, including a kill and a block by Abu to make it 22-19. Urias and Mims chalked up two putaways to tie it up at 23. A Pfefferle putaway and WSU hitting error capped the 25-23 and the sweep for the Buffs.