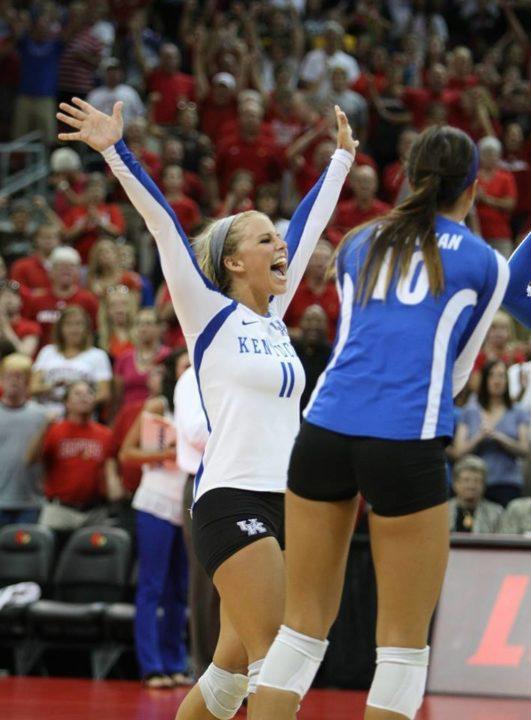 OXFORD, Miss. – For the ninth time in the last 10 seasons, head coach Craig Skinner picked up his 20th win as the No. 24 Kentucky volleyball team defeated Ole Miss, 3-1 (26-28, 25-15, 25-22, 25-15) at The Pavilion.
The victory improves UK to 20-6 overall and 13-2 in Southeastern Conference play. Ole Miss drops to 15-12 this season and 4-10 in league action.
“I really liked our focus and work during rallies to keep putting pressure on Ole Miss,” Skinner said. “Our balance is a great example of how we need to play. We don’t need to rely on one aspect of the game and we were effective in everything today. It’s good to see that type of play in November as we head down the stretch.”
Kentucky shut down the Rebels’ offense, holding Ole Miss to a .099 attacking clip. UK tied a season best with 18.0 total team blocks. Junior Emily Franklin tied her career high with 10 blocks. Sophomore Olivia Dailey also tied her career best with six blocks, including one solo block. Junior Kaz Brown added six blocks with two block solos during the four-set win.  Three other Wildcats – freshman Leah Edmond, sophomore Brooke Morgan and junior Darian Mack – all recorded three or more blocks.
“We felt like we had a good gameplan and our blocking could made a difference today,” Skinner said. “Emily and Olivia were great with their career highs. They were very disciplined with her hands and made a lot great moves.”
Along with her five blocks, Dailey helped the offense earn 59 kills with 53 assists. The match was her fourth this season with 50 or more helpers.
Junior libero Ashley Dusek was all over the floor on the defensive end, earning a season-best 31 digs. Dusek is just one of two UK players to produce 30-or-more digs in the 25 point rally scoring era, and this was the fifth in her career. The East Bernard, Texas native also helped out on the offensive end with a season-best three aces. One other Wildcat, McKenzie Watson, earned a service ace during the contest.
On the attack, Edmond paced the Wildcats with 18 kills on 37 swings. Brown also delivered a double-digit kill total during the match with 12 hammers on just 23 swings, good enough for a team-best .435 attacking clip. Along with her career day at the net, Franklin was one kill shy of a double-double with nine kills.
SET 1
Ole Miss started the match strong and earned an early 5-1 lead. After going down 8-2, UK called its first timeout of the match. UK responded out of the timeout with a kill from Brown and was able to cut the Rebel advantage to 13-11. Kentucky tied the set at 17-17 with a kill from Mack. Neither team could gain more than a one-point lead until Ole Miss won the first set 28-26. Edmond led the way with four kills in the set.
SET 2
Kentucky began the set with a kill from Edmond and UK controlled the set the entire way. The Wildcats jumped out to a 9-4 lead on a hammer from Mack and Ole Miss was unable to push within five for the rest of the set. The Wildcats biggest advantage was at 20-12 after a rejection from Mack and Edmond. UK won the set on an attack error, 25-16.
SET 3
The Rebels got the third set started with three-straight points, but UK responded to tie the set after a service error made the frame 3-3. The set rocked back-and-forth until a Brown solo block and attack error gave UK a five point advantage at 16-11. The Rebels fought back with a 7-2 run to go up 19-18. UK tied the frame with a Franklin kill, and three-straight kills from Edmond helped UK gain a 23-20 lead. Edmond finished Ole Miss off in the third set with a kill and UK took the frame 25-22.
SET 4
Ole Miss earned the first point of the final set and led at 2-1, but was unable to take back the lead the rest of the set. UK went up 3-2 with a kill from Edmond and never looked back. Senior Anni Thomasson doubled up the Rebels at 14-7 with a hammer. Ole Miss cut the advantage to five with an ace, but Kentucky would allow just five more points in the contest and win on a kill from Franklin, 25-15.
BY THE NUMBERS
31 – Number of digs for Ashley Dusek, a season high
18.0 – Total blocks for Kentucky today, tying a season high as a team
10 – Number of blocks for Emily Franklin, tying a career best
4 – Career 50+ assist matches for Olivia Dailey (53 today)

Ole Miss came out in set one to lead by six after several offensive errors by Kentucky and two blocks by junior middle blocker Taylor Alexander. The Rebels led 11-3 with a .400 hitting percentage, but the Wildcats pushed to close the gap with a six-point run forcing the Rebels to use their first timeout of the match. From there the first set went point for point until the Rebels closed it out at 28-26. Ole Miss and Kentucky finished the first set with almost identical statistics, both hitting above .200 with 4 blocks and 18 digs.

Ole Miss came out in the second set down 6-2 and couldn’t find a way to stop Kentucky’s middle as the score remained separated at 11-7. The Rebels used their first timeout of the set down 14-9, siding out at 61 percent to the Wildcat’s 89 percent. Kentucky went on an eight-point run to bring the score to 20-12. Sophomore Kathryn Cather entered the set at 22-15, her first appearance in almost a month due to injury, but the Wildcat’s took set two 25-16.

• Junior outside hitter Lexi Thompson notched a team-high 16 kills. This marks 22nd match for her to record double-digit kills and the sixth match Thompson has recorded 16 or more kills.

• Junior outside hitter Kate Gibson notched 9 kills and 16 digs. Gibson fell one kill short of marking her 14th double-double of the season. Gibson has recorded double-digit kills in all matches but three this season.

• Senior setter Aubrey Edie finished with 33 assists and 10 digs for her 11th double-double of the season.

• Sophomore libero Caroline Adams recorded 18 digs. This marks the fifth time Adams has notched 18 or more digs in a match this season.

• Junior middle blocker Taylor Alexander notched eight kills and five blocks. This marks the sixth time she has recorded eight kills in a match this season.

Quoting Head Coach Steven McRoberts
“Our team is frustrated with losing a lot of opportunities this year to win matches. They know we can win more than we have and perform better than we have at times. We started the match off pretty well and when we won the first set, we thought we would have the momentum for the rest of the day, but it seemed like we went flat the rest of the match. It was similar to the Florida match here earlier in the year where we won a great first set and then struggled the rest of the way.

“From an offensive standpoint, it was tough to get anything going, they have a really good block, but there were times that we made it better than it needed to be. When you are playing a top team like Kentucky, you have to take advantage of the opportunities when they present themselves, and we had a difficult time doing that today. Credit Kentucky, that’s one of the reasons they are consistently one of the top teams in the conference. They will make you pay when you don’t take advantage of opportunities.”

Up Next
Ole Miss will travel to Starkville to face Mississippi State on Wednesday, Nov. 16 at 7 p.m. and then onto Athens to face Georgia on Sunday, Nov. 20 at 1 p.m. CT.