No. 4 Texas Sweeps UT Rio Grande Valley to Advance to NCAA Round 2 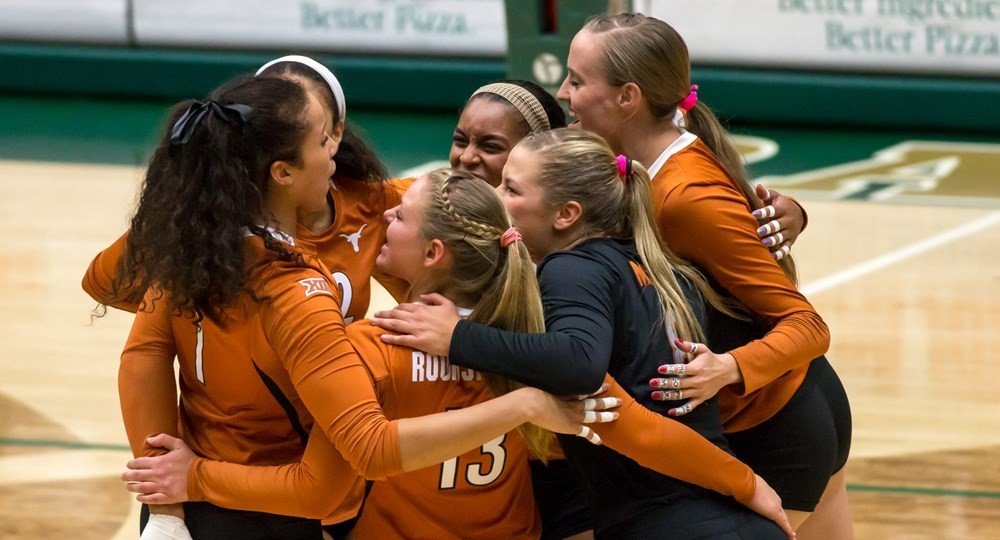 The Texas Longhorns topped the University of Texas Rio Grande Valley on Friday night to move to the second round of the NCAA Tournament on Saturday. Current Photo via Texas Athletics

In a UT System matchup on Friday night, the Texas Longhorns (23-4) topped the University of Texas Rio Grande Valley in dominant fashion to move to the second round of the NCAA Tournament on Saturday.

Texas will play SMU, which defeated Texas Tech in its first-round match, on Saturday evening at 8 p.m. ET in Gregory Gym. UTRGV finishes the season at a program-best 21-14.

Bedart-Ghani was recently moved from outside hitter to middle blocker, and it seems to have paid off for Texas.

Bedart-Ghani “has the best demeanor on our team, and she doesn’t get rattled,” said head coach Jerritt Elliott, according to a UT press release. “She stays steady, and I just threw her into practice and told her, ‘Try to hit a couple of these balls, let me see what it looks like.’

“She’s been able to adapt. Her blocking game has gotten better. Her transitioning footwork has gotten better and her trust. Both of our middles are playing at a higher level than they have at the first half or three quarters of our season.”

UTRGV couldn’t manage to get anything going offensively, finishing with only a .114 hitting percentage on the night to Texas’ .356. Ragni Steen Knudsen led UTRGV with eight kills and one ace, and Fatoumata Dacosta added 10 digs.

The series between these teams is 3-0 Texas. Texas is now 30-0 in NCAA First Round matches.

The Horns are 30-0 all-time in the first round and advance to play SMU on Saturday night at 7 p.m. pic.twitter.com/OWlGKvbnaz

Sophomore Middle Blocker Yaasmeen Bedart-Ghani recorded a career-high .929 hitting percentage, leading the team with a career-high 13 kills. Her previous career-high came against Baylor, when she hit .833 on 11 kills.

Bedart-Ghani’s hitting percentage (.929) against UTRGV is the highest mark for any Texas player in a game this season (min. 6 kills). She also contributed a team-high two blocks.

The sweep marks the 11th sweep on the season and brings the Horns to a 14-1 record when playing at home in Gregory Gym this season. The Longhorns hit above .300 for the 13th time this season (.356).

In the first set, Texas jumped out to a quick 5-1 lead. Several Longhorn errors brought RGV back into the match at 7-7. A service error from the Vaqueros sparked a 10-2 run by Texas, giving them a 18-9 edge. After a kill from senior Paulina Prierto-Cerame widened the gap to 21-11, UTRGV was forced to call a timeout. The Vaqueros simply could not surmount a first-set comeback as the Horns finished the set giving up only three more points, 25-14.

The Vaqueros settled into the second set more quickly, but still found themselves in a 4-9 hole as they called a timeout. A kill from sophomore Morgan Johnson began a 7-3 rally by the Longhorns that opened the score to 14-7. Although the Vaqueros managed to tally nine more points, they struggled to produce offensively, hitting .048. The home team never gave up the lead, taking the set 25-16.

UTRGV took a 3-2 advantage in the third set. White responded promptly with two service aces that helped rally Texas to 7-3 advantage. UTRGV would stay within striking distance as Vaquero Dubravka Vukoja registered a service ace to come within four points, 10-14, of the Longhorns.

The visitors continued to battle, forcing a Texas timeout as they closed the gap again, 14-18. Still, the Vaqueros could not find an answer as an attack error set up a match-point opportunity for the home team. Longhorn Yaasmeen Bedart-Ghani recorded a kill to give Texas the set win, 25-17, and the first-round victory.

The Longhorns will return to Gregory Gym on Saturday, Dec. 3 to take on SMU at 7 p.m. CT. The winner of the match will advance to the NCAA Regional Semifinals.

AUSTIN, Texas — The best season in the NCAA Division I program history of The University of Texas Rio Grande Valley (UTRGV) volleyball team is over after a 0-3 (14-25, 16-25, 17-25) loss to No. 4 Texas in the first round of the NCAA Tournament on Friday at Gregory Gym.

UTRGV (21-14) finishes the season with the most wins and highest winning percentage (.600) in NCAA DI program history.

Texas jumped out to a 5-1 first set lead, but a block by Mitrovic and senior Joanna Boronczyk helped UTRGV score three-straight to pull within 4-5. UTRGV tied the set at 7 on a Watson kill, before Texas responded by scoring the next six points as part of an 11-2 run to go up 18-9 and push the set out or reach.

Texas jumped out to an 11-4 lead in the second set. The teams traded points from there, with UTRGV pulling within six points eight times, including at 12-18 on a Knudsen kill. Texas responded by scoring the next three to go up 21-12 on a Bedart-Ghani kill en route to taking a 2-0 lead in the match.

Texas took a 14-7 lead in the third set, but a Mitrovic kill, an error and a Knudsen ace allowed UTRGV to score three in a row to pull within four. UTRGV again pulled within four at 12-16 on a block by Mitrovic and Boronczyk, and 14-18 on an ace by junior Dubravka Vukoja, but that’s as close as UTRGV got.