No. 6 Kansas Rolls Past West Virginia 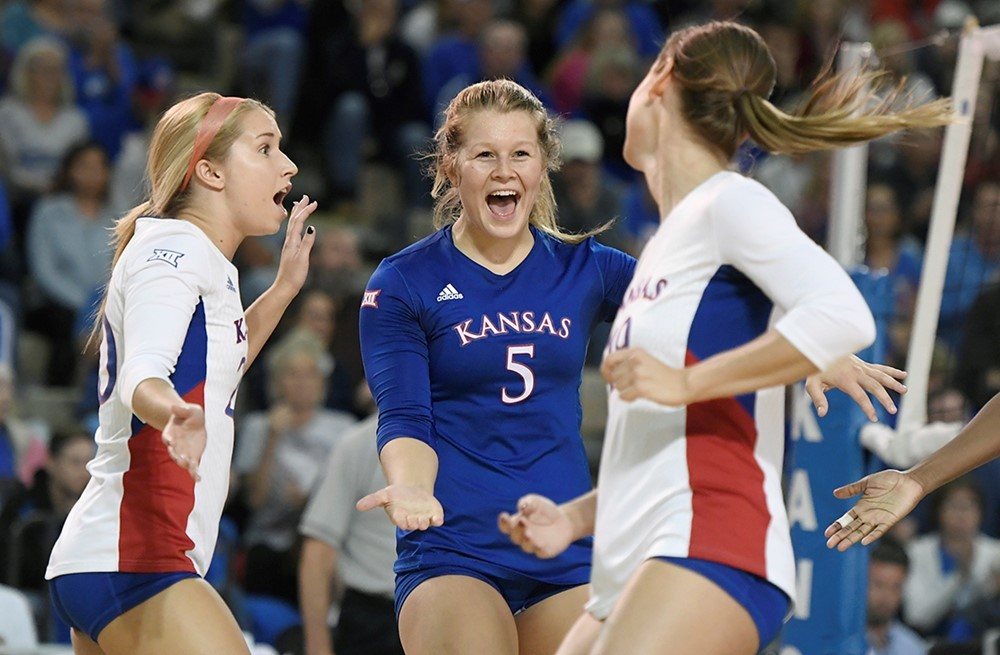 Kansas outhit West Virginia in the win .245-.175. Kelsie Payne put down 10 kills in the win, five coming in the final set. Madison Rigdon added nine kills and a five aces for the night.

Payton Caffery set a Mountaineer freshman record, with her 16 kills putting  her at 402 kills this season, making her ninth on the programs’s top-10 list for single season kills. Gianna Gotterba picked up a match-best 14 digs.

Back to back aces for Rigdon came in the first, giving the Jayhawks a 16-8 advantage. The Mountaineers pushed back towards the end of the first, but Rigdon’s fourth ace of the match ended the first set 25-18.

All-American setter, Ainise Havili ended her night with 30 assists and seven digs before a minor mouth injury took her out of the match at 22-16 in the third. Maggie Anderson relieved her and lead the Jayhawks to the three set victory.

Kansas (18-2, 7-1 Big 12) has now won six-straight matches, including four-straight sweeps, and 13-straight matches at home dating back to last season. On Thursday night, the Jayhawks held West Virginia to a .175 hitting percentage while scoring seven aces and seven blocks.

Junior outside hitter Madison Rigdon once again held court at the service line with power and finesse, leading Kansas with five aces on the night – just one shy of the six she recorded against Kansas State last Wednesday, Oct. 15. Junior All-American right-side hitter Kelsie Payne recorded five of her 10 kills in the third set as Kansas clinched the victory with a 25-22 triumph in the final set.

Much like her six aces in the first set last week, Rigdon set the tone for aggressive serving early with an ace on her second serve against the Mountaineers. Rigdon came back to the service line for back-to-back aces which gave the Jayhawks a 16-8 lead in the first. WVU surged towards the tail end of the first set, cutting KU’s lead to four at 22-18, but their momentum was halted by back-to-back block-assists from Payne and junior middle blockerKayla Cheadle to give KU set point.

On set point in the first set, Rigdon served up her fourth ace of the night to give Kansas a 25-18 opening-set win.

Kansas didn’t waste any time in rushing out to a 6-0 advantage in the second set as Rigdon whipped her fifth ace and final ace past the Mountaineer defense. West Virginia rallied to tie the set five times. But after a 12-12 score, Kansas pulled away with a 7-1 run, 19-13, before winning the set, 25-20. KU notched a terminal 17 kills in the second set.

Kansas closed out the match without their All-American setter, Ainise Havili, whose night ended with 30 assists and seven digs after a minor mouth injury. Kansas was leading 22-16 at the time. Senior Maggie Anderson relieved Havili and guided the Jayhawks to a match-clinching 25-22 third-set win.

Kansas record 33 of its 40 total kills in the second and third sets, ending with 16 kills on a .324 hitting percentage in the third set.

“We were over-excited about being able to play at home and being able to be in the gym after being off for so long,” Payne said of KU’s offensive progression on Thursday. “Once we settled in to our game it helped a lot.”

WVU standout freshman Payton Caffrey led the Mountaineer charge with a match-high 16 kills. The Mountaineers fall to 11-11 and 2-6 in Big 12 play in an improved campaign under second-year head coach Reed Sunahara.

“The way West Virginia plays – they play so hard,” Bechard explained. “They extend rallies and do a good job of making you work.”

UP NEXT
Kansas has the weekend off before traveling to face Texas Tech in Lubbock on Wednesday, Oct. 26. Next Saturday, Oct. 29, the Jayhawks will host a top-10 rematch with No. 2 Texas inside Horejsi Family Athletics Center.

“We have built some good momentum in October and were excited about getting ready to for next week,” Bechard said. “I’m happy that they get a weekend to enjoy themselves and support other teams on campus and be a student for a while. We’ll get back after it tomorrow and be ready to go by Monday.”

LAWRENCE, Kan. – Payton Caffrey set a Mountaineer freshman record as the West Virginia University volleyball dropped a 3-0 Big 12 match to No. 6 Kansas at the Horejsi Center in Lawrence, Kansas, on Thursday evening. The Mountaineers (11-11, 2-6) fell to the Jayhawks (18-2, 7-1) in set scores of 25-18, 25-20 and 25-22.
Scoring her 15th kill in the third set, Caffrey set a new freshman record with 401 kills on the season. She added another to bring her tally to 402, which is ninth on the program’s top-10 list for single season kills. Caffrey ended the night hitting .231 with 16 kills, a service ace and a block assist.
“Kansas is one of the top teams in the league and the nation for a reason,” said coach Red Sunahara. “They’re all well-trained athletes. I thought we competed well, but we came up short. As for Payton it’s a great honor. I hope she continues to do what she’s doing. She’s adding a lot of value to our team.”
Morgan Montgomery had eight kills, hitting .211 in the match, while Mia Swanegan hit .227 with seven kills.Natania Levak and Erin Slinde each had a pair of kills as well as WVU hit .175 with a total of 35 kills on the night. Slinde also registered a service ace.
Erin Slinde assisted on 20 kills, while Haley Roe added five assists. Roe added seven digs behind Gianna Gotterba’s team-high 14 dug balls. Taylor Cross also had seven digs, while Gabrielle Cuckovich added four to the scoresheet.
With five block assists, Hannah Shreve led the WVU blocking effort. Levak posted a trio of block assists as the Mountaineers totaled 6.0 team blocks.
Five aces in the first frame helped the Jayhawks take the set, 25-18. Back-to-back KU kills, followed by consecutive WVU attacking errors made up a 4-0 run that put the Jayhawks up 9-3. Back-to-back service aces put Kansas in front, 16-8. Caffrey netted consecutive kills to bring WVU within six, down 18-12. Montgomery and Levak each found the court as well, but back-to-black blocks ended the set in favor of the Jayhawks.
Kansas started the second set on a 4-0 streak before a kill from Swanegan put the Mountaineers on the board. The Mountaineers capitalized on several KU attacking errors as Shreve paired with Montgomery and then Slinde on blocks to tie the set, 7-7. A 5-0 run midway through the set put Kansas on top 17-13. Caffrey added back-to-back kills, but the Jayhawks used a service ace and a kill to bring up set point with a 24-18 lead. A KU attacking error and a Swanegan kill extended the set before a block gave the Jayhawks the 25-20 win and the 2-0 lead.
The Jayhawks once again jumped out to a 5-1 lead, using a pair of WVU errors on a 5-0 scoring run. Following a WVU timeout, Caffrey put down a kill, followed by a KU attacking error to bring the Mountaineers within three down 6-3. Kansas scored four more in a row for a 12-6 advantage. Swanegan and Slinde found the court before Caffrey scored a service ace to cut the WVU deficit to five at 17-12. Caffrey and Levak each added another kill on a 3-0 Mountaineer run that was stopped by a KU timeout. Swanegan again found the court to extend the set with Kansas service match point before a Jayhawk attacking error brought WVU within two at 24-22. However, Kansas took the next rally with a kill to win the set, 25-22, and the match, 3-0.
Kelsie Payne had a team-high kills for the Jayhawks, who hit .245 with 40 kills and 7.0 blocks.
West Virginia heads to Manhattan, Kansas, on Saturday for a 7 p.m. ET tilt with Kansas State.