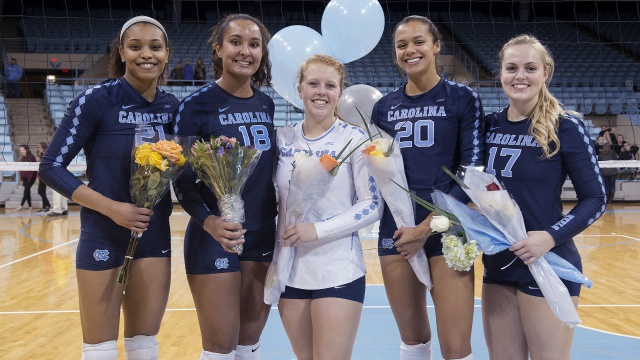 CHAPEL HILL – No. 6 North Carolina celebrated a successful Senior Day on Saturday afternoon, defeating Wake Forest in straight sets (25-15, 25-21, 25-15) to put an exclamation point on its impressive 2016 regular season. The win was Carolina’s school-record 19th of ACC play as the 2016 conference champions concluded the regular season at 27-3 (19-1 ACC), while the Demon Deacons saw their season come to a close at 9-22 (5-15 ACC).

All five of Carolina’s seniors started and saw significant action in their final regular season match, with Taylor Treacy leading the charge by hitting .421 with nine kills and five blocks. Fellow fifth-year Hayley McCorkle hit .538 with seven kills and five blocks, while Tatiana Durr played all six rotations on the outside and totaled nine digs, five kills and a solo block.

“The seniors came to me and said, ‘Hey, we were thinking about how we can all be on the court at the same time, and we’ve figured it out,’” said head coach Joe Sagula. “We had a lineup that would work so all five could start, and not just be there for a minute or a rotation, but stay there. They did a great job. They really rallied with each other and fought. They played some great digs and scramble plays, so we kept them on the court.”

“It’s fun as a setter because I get to decide who scores the points,” said senior Abigail Curry. “I definitely tried to give the balls to the seniors so they had that opportunity. I set Tatiana as much as I could so she could have that experience, since she hasn’t played front row for a couple of years. It’s just so much fun, and you can see the smiles out there. There’s nothing like it. We’ve been with each other for four years so there’s a really strong connection between us. It was just a lot of fun.”

Curry, who has played every single Tar Heel set since the beginning of her freshman year, posted 15 assists, seven digs and an ace, while senior libero Sheila Doyle tallied 12 digs and ace.

“Obviously I’m very emotional,” said Curry. “I’m surprised I didn’t cry. I just think that I’m so excited for what’s to come next, and I’m so content with what we’ve done in our years here. I’m so happy with the girls I’ve gotten to play with. There’s a whole slew of emotions, but I know that there’s more to come, so it was good. I’m happy and excited for the future.”

“This whole thing is about the seniors,” said Sagula. “I spoke to them earlier about the journey they’ve had from their freshman year to now and what an impact they’ve made on this program. Abbey struck me when she was introduced for playing every set in her career at Carolina – that’s amazing. Sheila is a great success story from someone who didn’t travel as a freshman to one of the best liberoes in the ACC. Taylor Treacy and Hayley McCorkle both redshirted because they were so raw, and then Hayley comes back from an injury [last season] to play phenomenal today on Senior Day. Tatiana played different roles all through her career, and this year’s was smaller, but then today she came out and played a great match as a senior.

Junior middle hitter Beth Nordhorn hit .500 with eight kills, while Madison Laufenberg posted three kills and two blocks in the third set. Junior Taylor Fricano slammed nine of the team’s 15 blocks and blasted three aces. The middle posted seven-or-more blocks in nine of the final 12 matches of the season while putting up eight service aces in the last three.

Curry served Carolina to a 7-0 lead to start the match, and Carolina never gave in, cruising to a 25-15 victory in the first set. UNC made just one attack error in the opener, out-hitting the Demon Deacons .400 to -.062 with 6.5 blocks.

Wake Forest played much closer in the second set, matching the Tar Heels in kills and aces, but Carolina used a 4-0 run served out by Doyle to take a 14-9 lead midway through the set and that proved the difference-maker, as UNC took the second set, 25-21, to pull ahead 2-0 in the match.

Back-to-back aces kicked off a five-point service run for Fricano to give the Tar Heels a quick 6-2 lead in the third. Mia Fradenburg then stepped in and served the Heels to a 11-5 lead. A kill by Taylor Borup pushed Carolina further in front, 19-11. Another great serving run by Fradenburg with a pair of blocks by Nordhorn and Laufenberg set up match point, and Laufenberg had the final swing of the match to take the third, 25-15, and complete UNC’s 15th sweep of the season.

“It’s absolutely great,” said Treacy after the sweep. “It is the cherry on top of a fantastic ACC season. I couldn’t have asked for anything better as a senior. I feel really blessed to have played five years here with the people that I have. I think the whole Senior Day thing really hit me last year—the feelings of nostalgia and a little bit of sadness about leaving— but now I’m just really looking forward to the tournament. We have so many more games to play and I just feel excited.”

Carolina, who secured the ACC’s automatic bid to the NCAA Tournament on Wednesday with a title-clinching win over Duke, will find out what comes next during the NCAA Selection Show on Sunday, Nov. 27. The hour-long volleyball special will air live at 9 p.m. on ESPNU.

“I couldn’t be any more confident than I am with this group [of seniors], because they know what it takes,” said Sagula. “They’re going to inspire the rest of this team, and they’re the ones that have the experience. Experience means a lot going forward.”

CHAPEL HILL, N.C. – The Demon Deacons fell to the No. 6 North Carolina Tar Heels by a final score of 3-0 in the 2016 season finale Saturday in Chapel Hill.

Bailey Shurbet entered the match just three career assists shy of breaking into the top 10 in program history. Shurbet achieved that third assist early in the first set and went on to finish the match with 26. She finishes the season with 1,092 assists, good for ninth in program history. That number is also the 14th most assists recorded in a single season by a Deac.

The Tar Heels were coming off a 3-1 win over Duke that gave them the title of 2016 ACC Champions.

North Carolina (27-3, 19-1 ACC) jumped out to an early 6-0 lead to force Wake Forest (9-22, 5-15 ACC) into a timeout. The Demon Deacons got on the board thanks to back-to-back errors from the Tar Heels. Eventually, Caitlyn Della recorded a pair of kills to pull the Deacs within three at 9-6. UNC continued to steadily build its lead and the Deacs could not fight back. The Tar Heels took the first set 25-15. Caitlyn Della recorded three kills and no errors in the first set for a .750 attack percentage to cap the Deacs’ offense.

The Demon Deacons held their ground early in the second set. The Tar Heels came out 2-0 but the Deacs bounced right back to tie it two-all. The teams then traded points until North Carolina went on a 4-0 run to take a 14-10 lead and forced Wake Forest into a timeout. From there, the Tar Heels comfortably led the remainder of the set to finish it out, 25-21. Della recorded another three kills in the set while Long led the Deacs with five kills and a .400 attack percentage.

The Deacs started the third set ahead 2-1 to mark their first lead of the match. However, the lead would not last long. The Tar Heels went on a 5-0 run to take a 6-2 lead. UNC would continue to build its lead until the Deacs called a timeout down 15-6. From there, the teams traded points but the UNC lead proved too much to overcome as the Tar Heels took the final set 25-15 and the match 3-0. Della once again led the Deacs with three kills and an impressive .750 attack percentage. She finished the match with nine kills and a .333 attack percentage, which led the Deacs.

Della and Caroline Rassenfoss totaled two blocks each while Caitlin Clarke and Caroline Wolf combined for 25 digs to anchor the defense.

Kylie Long tallied a match-high 10 kills to finish the season with 447 kills, the fifth-best season total in program history. She also improved to 1,566 career kills, good to remain third in Wake Forest history.

The Demon Deacons finish the 2016 season and head coach Bill Ferguson’s first season with a 9-22 record and a 5-15 record in ACC play.