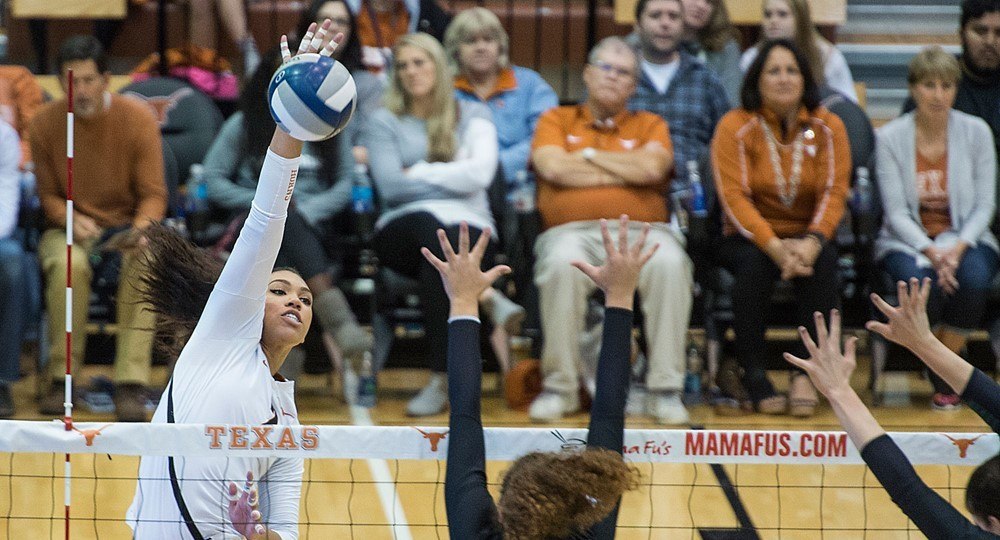 After dropping a heart-breaking five set match to Iowa State, the Texas Longhorn’s came out strong with an easy sweep of Texas Tech.

The Longhorn’s hit for .414 while holding Texas Tech to .135. Leading the attack was Ebony Nwanebu with 15 kills on a .560 hitting percentage. Cat McCoy took charge in the back row with 16 digs.

Katy Keenan and Toni McDougald led the way for the Red Raiders with eight kills. While Marguerite Grubb picked up 15 digs.

With the win, the Longhorns lead the all-time series against the Red Raiders, 82-9-2, and recorded their fourth bounce-back victory of the season coming off a loss to Iowa State on Saturday.

As a team, Texas recorded a hitting efficiency of .414, its highest since a sweep of Miami on Sept. 3 (.494). It was the second time this year the Longhorns hit better than .400 and the ninth time Texas hit at better than a .300 efficiency. UT improved to 10-0 this season when hitting .300 or better in a match.

Texas is a game back of league-leader Kansas (13-1) atop the Big 12 standings.

Junior opposite hitter Ebony Nwanebu‘s 15 kills on .560 hitting led three Longhorns with 10 or more kills. It was her second-best hitting efficiency of the season and her third time this year hitting better than .500.

Senior outside hitter Paulina Prieto Cerame followed with 14 kills on .407 hitting with four blocks, while freshman outside hitter Micaya White just missed her seventh double-double of the season (10 kills, 9 digs).

Senior setter Chloe Collins distributed a match-high 34 assists, while junior libero Cat McCoy came up with a match-high 16 digs. Sophomore middle blocker Morgan Johnson finished with a match-high five blocks, marking the 11th time this season she has posted five or more blocks and the fifth time in the last six matches.

In an opening set with 16 ties and four lead changes, the two teams traded points for much of the early part of the first set until back-to-back kills by Texas Tech’s Chandler Atwood and an attack error by Prieto Cerame broke an 11-all tie and put the Red Raiders ahead by three, 14-11. Texas Tech worked to push its advantage back out to three, 15-12, but back-to-back kills by Nwanebu brought the Longhorns to within one at 15-14. With Texas down 17-14, Nwanebu charted two consecutive kills and then teamed with Johnson for a block to tie the score at 17-17. With the score knotted at 18-all, Johnson registered a solo block and then teamed with White for a block to give the Longhorns a 20-18 advantage. Following three more ties, the Longhorns ran off three consecutive points to end the set with a 25-22 victory. Prieto Cerame only needed one chance to close it for Texas.

In the second set, Nwanebu continued a run of kills and the score was 7-3 before a Texas service error broke the streak. The Longhorns kept adding to their lead and went up 14-8 after a kill by Nwanebu and back-to-back put-downs from White. With Texas in front by four, 17-13, the Longhorns charted four consecutive kills to extend its advantage to eight, 21-13, heading into another Red Raider timeout. Texas closed out the set on a 4-1 run, driven by its defense, to take the 25-14 second-set win. White had seven digs in the set to lead four Longhorns with three or more.

Texas’ run continued into the third set, with the Horns opening a 10-point lead to an 18-8 advantage with blocks from sophomore Morgan Johnson. Texas Tech fought back with back-to-back kills from Lauren Douglass and Toni McDougald, but an emphatic strike into the right corner by Prieto Cerame took Texas to 23 points. Another Nwanebu kill made it 24-14 before a Texas Tech service error on match point sealed the Texas victory.

On tonight’s game: I’m pretty fired up. I like what we did tonight, I think we ed really well and we played one of our best, emotional matches, one of the most consistent matches and we managed the game at a really high level. Except for serving, which we can fix. Obviously, we had the disappointing loss at Iowa State, but it’s nice to see that we let that go and our focus now is to keep getting better and keep peaking at the right time. We challenge them to do something from an emotional standpoint and I liked the response afterward, I liked our chemistry, I thought the way that we played was at a high level and even game one, where Texas Tech played phenomenal volleyball, we just kind of stayed with it, so some growth there. I like what this team is doing. I think they’ve been volleying all season and kind of fighting to get to that point and I like what they’re doing.

On the team’s mentality after the loss last weekend: Yea I think what I said about two seconds in the locker room afterwards and we just have to have a fish memory–we’ve got some very athletic and confident young women and right now. They’ve got bigger focuses and we’ve got a couple matches left for Kansas to see what they can do, but our goal is to be a top four seed and I think we have a chance at potentially still doing that.

On Kansas State: We have a good challenge with them the first time, we went five with them, they’re a disciplined team. We play them on Saturday night and we’re going to get ready with film. Erik can start breaking down the defense and working on some stuff tomorrow and get our team ready. We’re going to go about it the same way we’ve been doing. We’ve had to change a whole lot of things and go different directions, but right now it’s about getting them in the right mindset. Our staff has a ton of belief in this team and right now it’s just kind of empowering them so they know how good they can really be. Tonight they showed that a little bit and we’ve got to go on that with Kansas State and then we’ll get a week of practice before we play West Virginia.

On her mentality: Jerritt talked to me before the game about being confident and about being the best player that I can possibly be. So in the middle of the second game, even before the game, I was like why not, I’m just going to go for it and try to be fearless.

On the loss to Iowa State: It was a really disappointing loss, but I really liked the way that we came to practice with a good mentality, just positive energy, and I think it showed tonight at the game. We were just having fun and that’s why I think we played so well.

On Morgan (Johnson)’s play tonight: I loved seeing Morgan get three blocks in a row, that just showed how bought in she was. Seeing other people do good jobs makes you want to do your job. I think she did a good job stepping up and we just kept our composure and followed the game plan.

On how the team played defensively: I think we just dialed in and I think that once our block got going, our defense could function a lot better around that. I think we’re working really hard at practice and just trying to get better touches on the ball so that its easier on Chloe. I think it got better throughout the match.

AUSTIN, Texas – No. 7 Texas posted the highest team hitting percentage in Big 12 play this season at .414 as the Red Raiders fell to the Longhorns, 0-3, Wednesday at Gregory Gymnasium in Austin.

“We got our offense going early and was able to sideout and keep our rotations moving,” head coach Tony Graystone said. “Toward the end of the first set you could see their block get established, and that made it tough going the rest of the way. Overall I was real happy with most of what we saw tonight.”

Three Longhorns tallied double-digit kills with junior Ebony Nwanebu’s match-high 15 leading the way. Texas connected on 46 kills throughout the match compared to 32 for the Red Raiders, including hitting percentages of .341, .559 and .333 in each stanza. Behind sophomore Morgan Johnson’s five blocks, Texas recorded a 9-2 block advantage in the contest.

“In the first set, they were going offspeed a lot and working different shots,” Graystone said. “Toward the end of the set they decided to get a lot more physical and swing away. I think they got us loosened up with the offspeed stuff and then went to big swings and that helped their outside hitters get going.”

Freshman Toni McDougald and sophomore Katy Keenan led the Red Raider attack with eight kills each. McDougald was especially hot early with seven kills in the first set. Keenan’s eight kills came on just 16 attacks with only two errors for best clip since Sept. 24 against West Virginia at .375.

“This was about the third or fourth match in a row where she has really played well,” Graystone said. “This is very encouraging for us as we wrap up this season. The same thing for Toni. The last couple of matches we have seen her find her swing. If you can score that many points against Texas’s block, that’s saying something.”

The Red Raiders went toe to toe with the Longhorns in the opening frame, and sophomore Katy Keenan would cap off a 5-1 Tech run that gave the scarlet and black a 17-14 lead. The Texas block, however, tilted the set back to the Longhorns, who closed on a 4-1 run to take the set 25-22.

The Longhorns hit .559 in the second frame, establishing an early lead and holding off the Red Raiders with a 25-14 set win. They carried that over into the third frame, gaining a 10-3 advantage and closing the match with a 25-15 third set win.

UP NEXT
The Red Raiders return home for Senior Night Saturday, Nov. 19, against TCU at 6 p.m. at United Supermarkets Arena. A ceremony will take place before the match recognizing five members of the program who are in their final year.