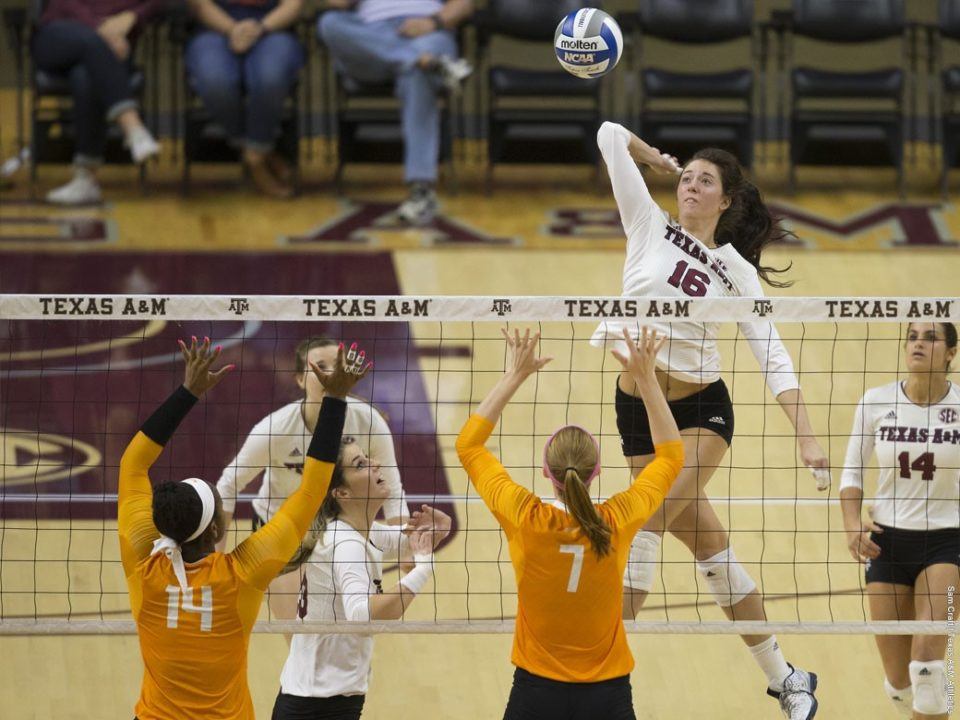 It was the eighth consecutive victory and the 13th win in the last 14 matches for the Aggies, who improve to 19-7, including 13-2 in Southeastern Conference matches. Tennessee drops to 15-13 overall and 5-10 in SEC matches. It was the seventh consecutive loss for the Vols in the series against the Aggies, but they end a streak of six consecutive sweeps.

Senior middle blocker Jazzmin Babers led the Aggies with 18 points as she recorded her second double-double of the season and the fifth of her career with 11 blocks—including a career-high-tying three solo blocks—and 11 kills while hitting .556. Sophomore middle blocker Kaitlyn Blake added 16 points with eight blocks and 12 kills while hitting at a .500 clip. Blake also climbed from ninth to seventh in the A&M season records for block assists in a season, as she raised her total to 129.

A&M outside hitters Hollann Hans and Kiara McGee, who pitched in a career-high six blocks, also had double-figure kills with 13 and 10, respectively, but they were held to a combined .139 hitting efficiency.

The opening set was tied at 4-4 when Babers tooled the Tennessee block for a kill, marking the start of a 4-0 run by the Aggies. Texas A&M led the remainder of the set, outhitting the Vols, .341 to .305, although the Aggies never held more than a four-point cushion until the last run to close out the frame. The Vols were within 22-19 following a kill by Tessa Grubbs, but Aiple countered with a kill and then set up Blake for a kill to put the Aggies at set point. Aiple closed out the frame on the next play, posting her fourth kill of the set.

The Aggies led the entire second set and jumped out to a 10-3 lead, including four points that were the result of a block. Tennessee, which was outhit, .229 to .054, later trailed 18-12 following a kill by Hans, forcing the Vols to call a timeout. Tennessee came out of the timeout and blocked A&M on three consecutive plays to get within 18-15 before Hans found the floor for a kill. Tennessee would get within 19-17 before Hans had a kill and McGee and Blake teamed for a block to put A&M up 21-17. The Vols were unable to get closer than three points for the remainder of the set as the teams began to exchange points. The Aggies were ahead, 23-20, when Babers had back-to-back kills to close out the win, giving A&M a 2-0 lead in the match.

Tennessee used a 4-0 run to take a 4-1 lead in the third set, and never looked back. The Vols, who outhit A&M, .407 to .138 in the stanza, went on to build their largest lead of the match at 24-13 after reeling off three unanswered points. A&M fought off three set points before the Aggies hit into the net to end the set.

Texas A&M returns to the road for a crucial showdown at No. 23 Kentucky on Sunday. The match against the Wildcats starts at 1 p.m. (CT) at Memorial Coliseum, and the contest will be televised on SEC Network.

A&M has only one home match remaining, as the Aggies play host to LSU on Wednesday, Nov. 23 (Thanksgiving Eve) at 6:30 p.m. at Reed Arena. It will be Senior Night, and A&M seniors Victoria Arenas, Jazzmin Babers, Emily Hardesty, Katelyn Labhart and Kaysie Shebeneck will be honored in a postmatch ceremony.

Freshman setter Sedona Hansen recorded her 15th double-double of the season with 43 assists and a career-best 20 digs. Junior Kanisha Jimenez had the best match of her season with nine kills and 10 digs, one kill shy of a double-double.

Texas A&M opened the second set with a 10-3 lead and stayed in front. The Vols won five of six points at a stretch to cut the lead to 19-17 on a kill by Kendra Turner. Texas A&M eventually took the set 25-20.

The Vols surged midway through the third set, scoring five unanswered points to take a 13-7 lead off back-to-back aces by Erica Treiber. Tennessee eventually extended the lead to 11 points at 24-13 with a block. The Aggies saved three set points but the Vols won the set 25-16.

The fourth set came down to the wire. The Vols had a set point chance when Grubbs put Tennessee up 24-23, but Texas A&M won the next two points to have a match point. Treiber recorded a kill to foil the Aggies’ first match point to tie the set 25-25.

Jazzmin Babers and Hollann Hans came up with kills for the Aggies in the final two points as Texas A&M sealed the match 27-25.

Defensively, Tennessee out-dug Texas A&M 67-60, but the Aggies had 19 team blocks, compared to 13 for Tennessee.