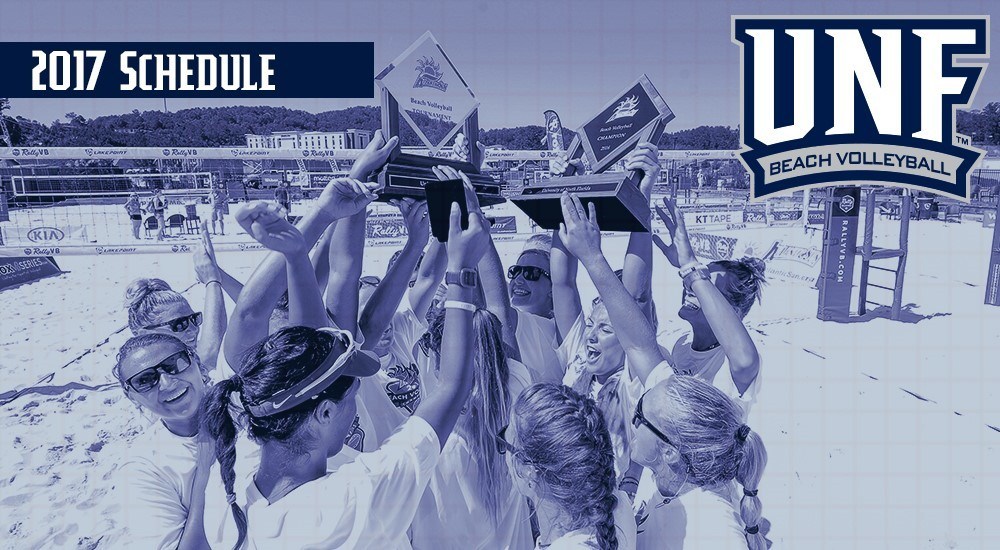 The defending ASUN Champion North Florida beach volleyball team is ramping up for another run at a league title with... Current Photo via North Florida Athletics

The defending ASUN Champion North Florida beach volleyball team is ramping up for another run at a league title with a challenging schedule as announced on Tuesday.

“We are excited for this year’s beach schedule. We play many of the perennial top teams from the east coast early in the year including back at St Augustine,” said head coach Steve Loeswick. “Those duals should really help our preparation for the challenging ASUN schedule. Our league continues to get stronger and our team is set on training and competing to be the best we can be.”

Following their home tournament, the Ospreys head out to Baton Rouge to take part in the LSU Tiger Beach Challenge to kick off spring break on March 18. North Florida takes on UAB, Tulane, Houston Baptist and host LSU. Last season, North Florida took on UAB twice and garnered 5-0 wins in both meetings. The hosts closed out 2016 with a No. 10 ranking and their best finish in program history with a 20-9 mark.

North Florida continues its spring break on the road as it treks to Spring Hill to take part in its tri-match on March 22 to finish up prep for ASUN play.

FGCU and Stetson come to Jacksonville to play at the JU Beach Complex to kick off ASUN play for all four teams. UNF and FGCU play first on Friday, March 31 with a match against Stetson to follow. The Saturday matches are flipped with Hatters and Ospreys playing first before the Battle of the Birds closes out the weekend.

On April 7, the River City Rumble – Beach Volleyball edition – takes place at 2 p.m. on Jacksonville’s campus. The Ospreys then head back over to take part in the Dolphins Invitational over the weekend.

UNF takes off the Coastal Carolina where it will face the Chanticleers and Mercer on Friday, April 14 and Saturday as well in the final ASUN matches before the ASUN Tournament.

Stetson hosts the sixth ASUN Beach Volleyball Tournament beginning on Saturday, April 22. The Ospreys garnered a second seed in the 2016 edition and came back after losing their opening match to sweep the rest of the way for the win. UNF upset top-seeded Stetson, 3-2, to grab its third conference title.