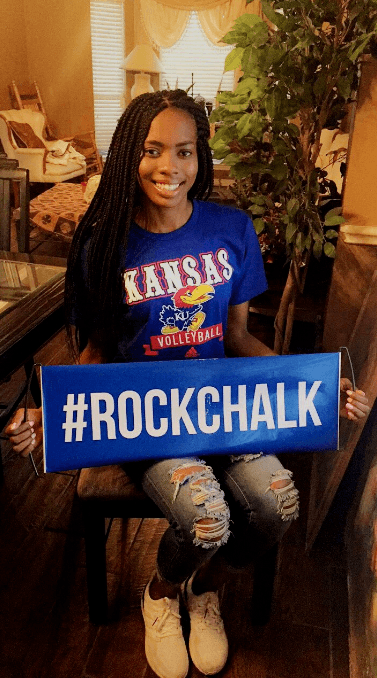 Mmachi Nwoke becomes the fifth player to transfer out of Arizona State since the end of the season – arriving... Current Photo via Mmachi, Twitter

Mmachi Nwoke becomes the fifth player to transfer out of Arizona State since the end of the season – arriving to her new team, Kansas.

Last season, Kansas made a great run up until the tournament, becoming the Big 12 conference championships for the first time in program history. The Jayhawks made it to the NCAA Tournament with the highest rank in program history at #5, but lost in the second round to Creighton, who made a huge Cinderella run in the tournament.

“Mmachi will represent our program very well as a solid individual, great student and a high-level athlete,” said head coach Ray Bechard. “The timing couldn’t be better for both of us because we need depth at the middle blocker position and she, being from the Dallas area, wanted to compete at the highest level in a conference that brings her closer to home.”

In Nwoke’s first season with Arizona, she played in a total of 65 sets for the Sun Devils, totaling 54 kills and 45 blocks. She set a career-best in kill with nine on a .750 hitting percentage against Long Beach State on September 10.

Four of Nwoke’s former teammates also transferred out of Arizona State after Sanja Tomasevic was promoted to head coach, after Stevie Mussie, the teams former head coach, resigned after just one season.

Kansas’s Twitter announces the arrival of newest member of their team: