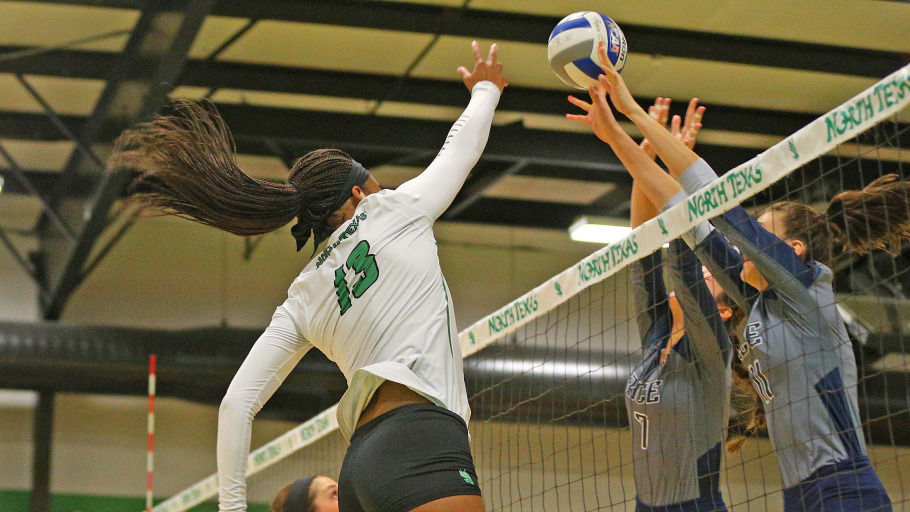 North Texas fought hard to take a five-set match away from Western Kentucky to move them a step in the right direction of owning a share of the Conference USA title. Current Photo via North Texas Athletics

North Texas fought hard to take a five-set match away from Western Kentucky to move them a step in the right direction of owning a share of the Conference USA title. If North Texas beats MTSU on Saturday, they will hold a claim at the title. This is the fourth season in a row that WKU has held a claim of the C-USA conference title.

North Texas’ Amanda Chamberlain just clinched her 1,000th kill in the win with 14 kills in the win. Her 13th kill of the match brought her to 1,000 kills which came on her second kill in the fifth set.

In all categories except for digs, both teams were fairly even in the match, with WKU led with 68 digs to North Texas’ 51. Also, WKU posted a .340 hitting clip while holding the Mean Green to .256. This, though, was not enough for the Toppers to take down their conference foe.

WKU took the first set, setting what they thought would be the tone of the night with a dominant 25-15 first-set score. However, this would not be the case, as North Texas rallied to take the next two sets 25-21 and 25-19. With the game on the line for the Lady Toppers, WKU fought through the fourth set to force a fifth and deciding after a 25-19 set four win.

The fifth set was an all-out brawl between the two squads, with points going back and forth throughout. With North Texas down 4-5 early, the spit off three straight points on kills from Chamberlain and Valerie Valerian along with a WKU hitting error to go up 7-5. The trade-off of points kept happening with the score at 11-10 WKU when the Mean Green rallied off four straight points to make it match-point at 14-11. The Toppers held off two match points before Alexis Wright threw down the final point at 15-13.

Wright led the charge for the Mean Green with 18 kills on a .361 hitting percentage and five blocks. Chamberlain added in another 14 kills along with Holly Milam‘s 12. Henrianna Ibarra picked up 14 digs in the win while setter Karley York dished out 55 assists and six digs.

For WKU, Alyssa Cavanaugh put down 19 kills and seven digs while Rachel Anderson added another 18 kills on a .429 hitting clip. Sydney Engle also clinched double-digit kills with 10 and nine digs while setter Jessica Lucas recorded her eighth double-double with 53 assists and 13 digs.

“I couldn’t be more proud of the way our kids played tonight,” Head Coach Travis Hudsonshared. “If we play with the same character and determination we played with tonight in the tournament next week, we’ll be in good shape. The team did everything that I asked them to do all match long and I couldn’t be more proud.”

After splitting the regular-season title with UTSA during its first year in Conference USA, WKU has since claimed three more league titles including at least a share of this year’s crown. If North Texas takes down MTSU on Saturday, the Mean Green and Lady Toppers will share the title.

WKU has closed the 2017 regular season with a 27-3 overall record, including a 13-1 mark in C-USA matchups. Additionally, the Red and White are the first team in league history to collect four-consecutive championships. The last time that WKU dropped a Conference USA tilt was Oct. 31, 2015, at Rice as the Lady Toppers put together a string of 38-consecutive wins prior to tonight’s loss.

Following Senior Day recognition for both the Lady Topper and Mean Green seniors, play from Denton began with Taylor Dellinger finding the floor for a kill. North Texas responded with three of the next four points but WKU would follow with a four-point run to take the lead. After a tie at 7-7, a Jessica Lucas kill put the Lady Toppers up for good. A Sophia Cerino service ace gave WKU a 14-10 lead and North Texas called for a timeout. Out of the break, Amara Listenbee and Sydney Engle combined for a block to push the margin to five. The Lady Toppers would outscore the Mean Green 10-5 the rest of the way for the 25-15 first-set victory. Anderson led the way for WKU with four kills on five swings while Dellinger added three strikes of her own.

North Texas came out strong in set two, tallying the frame’s first two points. The Mean Green led 5-3 before the Red and White strung together three-straight points and owned five-of-six during a stretch to take an 8-6 advantage. After six early ties, WKU pushed ahead to a 14-12 lead thanks to Hallie Shelton‘s third ace of the match and forced North Texas to a timeout. The score stayed close as the teams continued to trade points before the hosts opened up a two-point advantage at 20-18 to force a WKU timeout. Four points later, North Texas called for a stop with a 22-20 lead and held on to take set two in a 25-21 decision.

After the long break, WKU put the first three tallies on the board thanks to a Lucas service ace with Anderson kills on either side of it. North Texas responded with a couple of kills before Sydney Engle found the floor on back-to-back strikes. Shelton went on to add her fourth ace of the match for a new career-high mark. North Texas rallied and went on to score eight of the next 10 points to take a two-point lead at 11-9 to force a WKU stoppage. After the Mean Green opened up a 15-10 advantage, WKU battled back as Amara Listenbee and Dellinger combined for a block to pull within three. Following a North Texas timeout, the Mean Green maintained the lead and pushed ahead to a 20-14 advantage. WKU fought off three sets points but ultimately dropped the third set 25-19 as North Texas took a 2-1 lead in the match.

WKU Volleyball opened set four with a quick 4-1 lead but the Mean Green responded and knotted the action up 5-5. Four ties later, the Lady Toppers put together back-to-back kills and kept pushing ahead. The lead grew to four after a pair of Cavanaugh kills forcing the Mean Green to use a timeout trailing 16-12. Four points later, North Texas used its final stop trailing 19-13 to the Red and White. Out of the break, WKU maintained a multi-point lead and ultimately claimed the fourth set by a score of 25-19.

Until North Texas took a 7-5 lead on a three-point run, the sides had traded points in the frame. WKU responded with back-to-back Cavanaugh kills. After North Texas regained the lead at 8-7, the Lady Toppers responded and turned the tables at 9-8. Tied at 11-11, the Mean Green struck next to take a 13-11 lead and force a WKU timeout. North Texas pushed ahead to match point at 14-11 but Kayland Jackson found the floor to keep the Lady Toppers alive. The Red and White fought off another match point to pull within one but North Texas finished things off with a kill for the 15-13 set five victory.

For the fourth time on the season, and in conference action, three Lady Toppers registered double-digit kills. Cavanaugh (19), Anderson (18) and Engle (10) all reached double figures.

Lucas finished with her eighth double-double performance of her senior campaign, notching 45 assists and 11 digs. Lucas also added seven kills, an ace and a block.

Emma Kowalkowski led the team in digs with 14 to go along with an assist. WKU out-dug North Texas 60-43 as a team.

North Texas held a slim 10-9 lead in team blocks over the Lady Toppers. Anderson finished with a team-high five stuffs while Engle and Dellinger contributed four and three, respectively.

Tonight’s match from Denton concludes WKU Volleyball’s regular season slate. Interleague matches will wrap up on Saturday and the full Championship bracket will be released then for next week’s Conference USA Volleyball Championship in Bowling Green.

Tickets for the 2017 Conference USA Volleyball Championship are on sale now and can be purchased from the WKU Ticket Office at 1-800-5-BIGRED or online at WKUTickets.com.