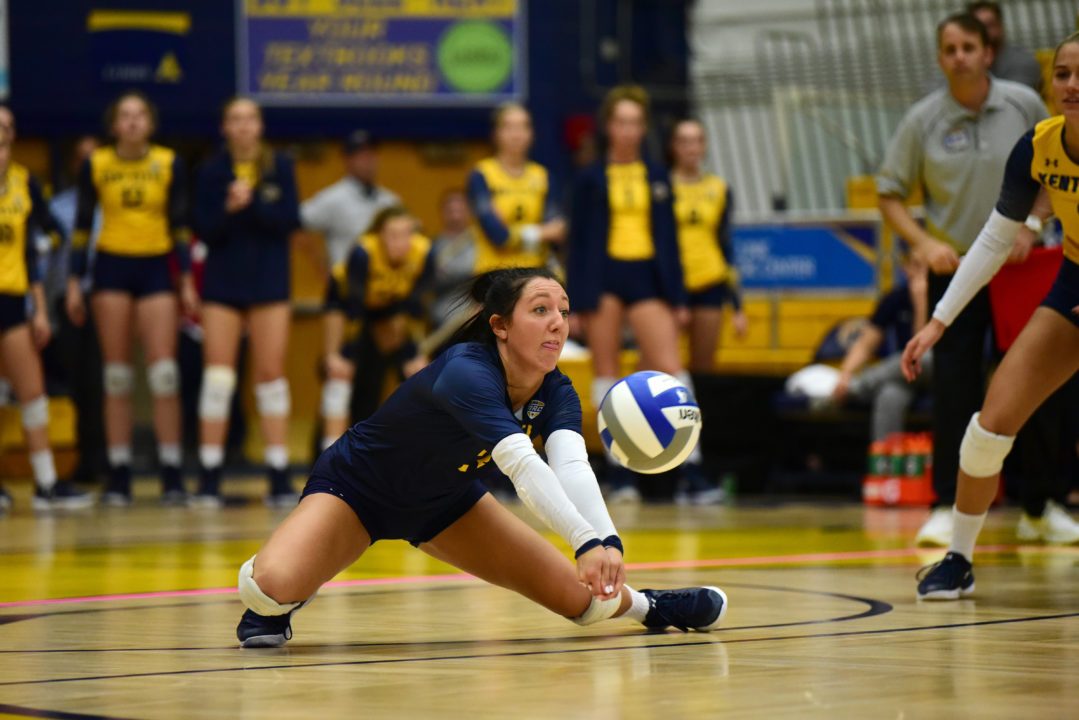 Kent State’s Challen Geraghty joined an elite group as one of only 26 players in NCAA Division I history with 2,401 or more digs in a loss to Ohio.  Current Photo via Kent State Athletics

ATHENS, Ohio – Kent State’s Challen Geraghty joined an elite group as one of only 26 players in NCAA Division I history with 2,401 or more digs.

Entering Thursday’s contest with Ohio, the senior libero needed just seven digs to join the group and registered 19 in the loss, moving her career total to 2,413, which ranks 24th all time.

Sophomore outside hitter Lizzie Stephens and junior setter/outside hitter Stephanie Olman led the way for the Bobcats offensively with 14 and 10 kills respectively. Redshirt junior middle blocker Katie Nelson followed with seven kills and three blocks, while hitting at a team-best .375 clip. Freshman libero Macy Reihing led the backcourt with 16 digs, while Stephens rounded out a double double with 15 saves.

Kent State started the match with a 9-3 run, capitalizing on five Bobcat miscues and two kills by Oberg. Down 14-8 after kills by Oberg, Bittinger and King, Ohio outscored KSU 10-5 to narrow the gap to 19-18. Two kills each by Tia Jimerson and Bittinger and a pair of kills aided the rally. Kills by King and Younkin put the Golden Flash back up three at 22-19, but the Bobcats stole away the stanza with a final 6-1 run.  Two Carley Remmers putaways and two KSU errors set up the final point, a kill by Stephens.

After a tie at 3-all, Ohio built a four-point advantage in Set 2 with Olman and Stephens turned in two kills apiece to push the lead to 11-7. Kent State rallied to knot the score at 13 en route to a 15-14 lead. Kills by four different players and two blocks by Younkin put the Golden Flashes on top. A hitting error tied the score at 15 all, sparking a string of eight ties, the last at 22-all. An Olman kill and KSU miscue made it 24-22. A service error kept the set going, but Olman capped the set the following point.

Ohio scored eight of the first 10 points in Set 3 with two kills each by King and Jimerson and a trio of Kent State errors. Down 11-4, the Golden Flashes mounted a comeback, slicing the margin to one at 11-10. An ace by Lexi Mantas and a trio of Bobcat miscues aided the run. Ohio answered with an 8-3 run to go up 19-14 with help from two kills and a block by Katie Nelson. A Remmers putaway stretched the advantage to six at 22-16. A Vera Giazomazzi kill put Ohio on the hill at 24-18. Kills by Bittinger and Brittney Jakscht kept the match going, before Stephens ended the night.