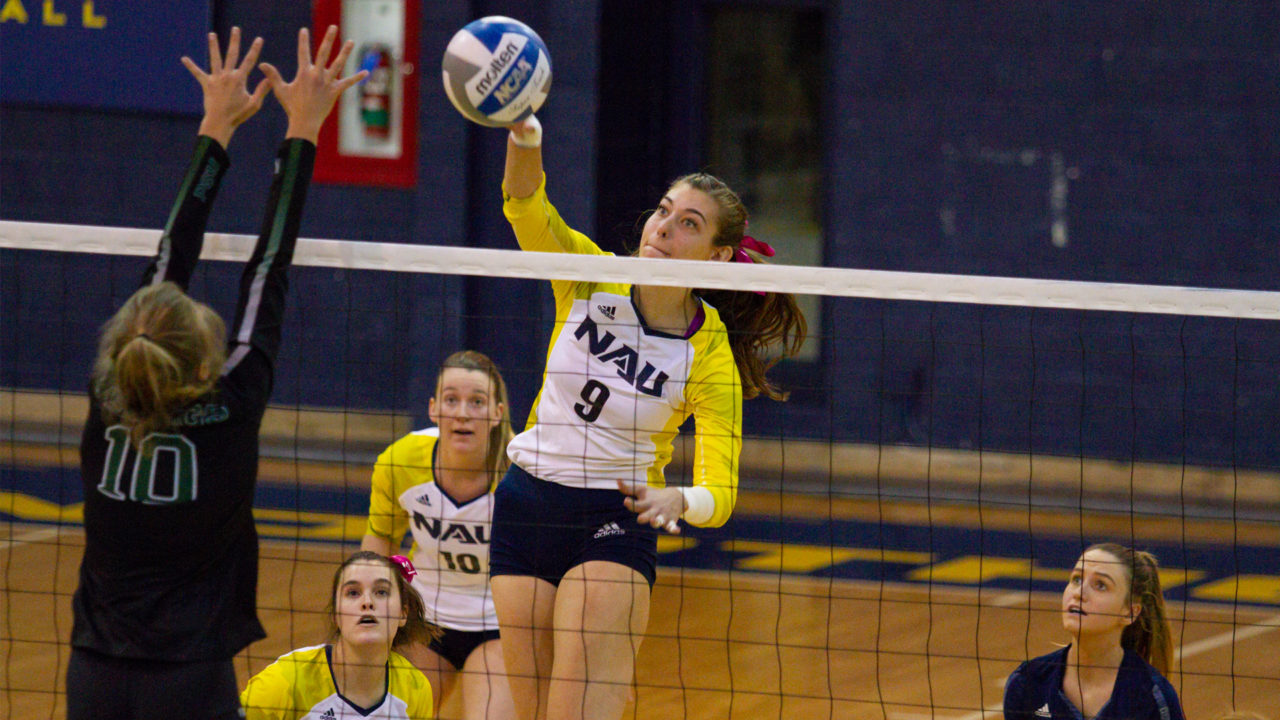 The Lumberjacks (17-8 overall, 9-3 Big Sky), which were the first team to clinch a conference tournament berth with their victory over Portland State last Saturday, hit the road for matches at Montana and Montana State with three weeks remaining in the regular season.  Current Photo via Northern Arizona Athletics

FLAGSTAFF, Ariz. – October was a good month for the Northern Arizona volleyball team, but the hope is that November will be even better. With three weeks remaining before the Big Sky Championship, the Lumberjacks’ first step on the stretch run will be on the road this week starting with Montana at 6 p.m. MST on Thursday. NAU will then continue on to Montana State on Saturday at 6:30 p.m. MST.

“We feel like our team has grown a lot over the past month and that our best volleyball is still ahead of us,” said head coach Ken Murphy. “In practice, you can tell that our players are hungry to learn and improve. We are looking forward to two great road challenges this weekend.”

NAU compiled a 7-1 record in the month of October, which propelled the ‘Jacks into a tie for second in the Big Sky standings. The Lumberjacks (17-8 overall, 9-3 Big Sky) were the first team to clinch a conference tournament berth with their victory over Portland State last Saturday. NAU swept Sacramento State and Portland State at home last week to extend its win streak to a season-high tying four matches.

NAU will look to complete the season sweep of Montana and Montana State this week. The Lumberjacks picked up three-set victories against both the Grizzlies and Bobcats at home on Oct. 4 and Oct. 6. Redshirt senior Kaylie Jorgenson was named Big Sky Offensive Player of the Week following the first round of matches against the Montana schools. Jorgenson repeated as Offensive Player of the Week on Monday after averaging 3.83 kills per set and hitting .412 versus the Hornets and Vikings. Jorgenson, ranked 10th in the league with 3.04 kills per set for the season, is one shy of Janae Vander Ploeg‘s record four awards in a season with three this fall.

The ‘Jacks swept the conference Player of the Week awards with senior Jordan Anderson receiving the Defensive honor. Anderson averaged 5.50 digs per set last week, and is ranked No. 44 in the country with 447 total digs this season.

Speaking of individual national rankings, junior Abby Akin is No. 16 nationally in hitting percentage at .396. Akin hit better than .300 in all but seven matches this season and over her last 10 matches, she has hit at least .333 in nine of them.