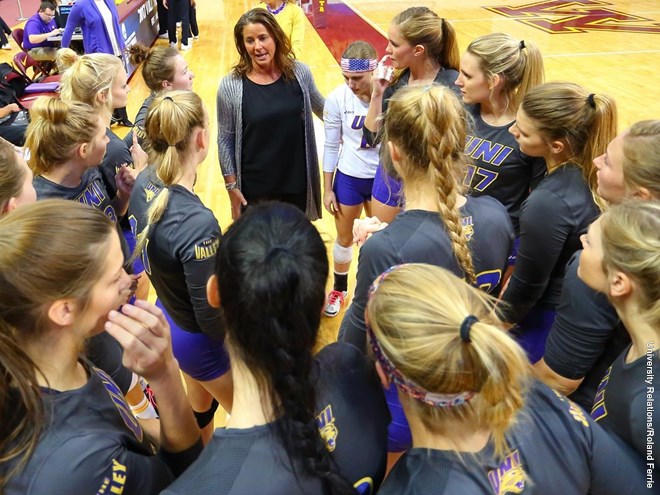 In the previous 26 seasons of MVC volleyball, UNI has finished no lower than fourth place and tallied at least 12 conference wins every year.

UNI is 24-2 in Missouri Valley Conference openers and 23-3 in MVC home openers.

THE PANTHERS
• UNI starts Missouri Valley Conference action Friday at Drake before returning to the McLeod Center for its conference home opener Monday against Indiana State.
• The Panthers closed pre-conference play by going 1-2 at the Illini Classic hosted by #8 Illinois. UNI swept Lipscomb and lost to top-10 opponents Illinois and Creighton.
• UNI won Ball State’s Active Ankle Challenge with victories over Ball State, Indiana, and North Dakota State. Karlie Taylor was named Tournament MVP while Piper Thomas and Kendyl Sorge were also selected to the All-Tournament Team.
• UNI had an outstanding opening weekend and caught national attention by jumping into the AVCA Poll at the No. 17 spot after not receiving a vote in the preseason poll. The Panthers went 2-1 at the Trojan Invitational to begin the season with wins against #13 Creighton and #5 Kentucky. Currently, UNI is receiving votes and sits with 11 total points in the voting.
• Karlie Taylor was named the MVC Player of the Week in week one after leading the Panthers in kills and points and earning a spot on the Trojan Invitational All-Tournament Team. Rachel Koop also earned All-Tournament Team honors.
• The Panthers were picked to finish first in the Missouri Valley Conference after finishing second last year. UNI garnered seven first-place votes and topped the preseason poll with 95 out of a possible 100 points.
• UNI returns four of seven starters from last year, including Honorable Mention All-America honorees Karlie Taylor and Piper Thomas, MVC All-Freshman pick Jaydlin Seehase and libero Kendyl Sorge.
• The Panthers rank No. 8 all-time in NCAA Division I winning percentage (.773). UNI trails only Penn State (.863), Hawaii (.852), Nebraska (.843), Florida (.833), Stanford (.813), BYU (.778) and UCLA (.774).
• UNI, Hawaii, Nebraska, Stanford, Penn State and UCLA lead the nation with 37 consecutive non-losing seasons in NCAA Division I volleyball.
• UNI has posted 33 straight NCAA Division I winning seasons – the fifth-longest active streak in the nation behind Hawaii (37), Nebraska (37), Penn State (37) and Stanford (37).
• Head coach Bobbi Petersen is in her 19th year at the helm of the Panther program with a record of 467-147. She has led the Panthers to 13 NCAA Tournament appearances.

RADIO COVERAGE
Live radio coverage of the UNI Panther volleyball team can be found on UNIPanthers.com and KXEL (1540-AM). All audio this year will be free of charge (no subscription service).
Chris Kleinhans-Schulz is in his seventh season of calling UNI volleyball matches.

WATCH LIVE
UNI’s league opener Friday at Drake can be viewed on ESPN+. Monday’s home match against Indiana State will be broadcast on ESPN3.

TALKIN’ TREES WITH INDIANA STATE
Indiana State went 7-5 in non-conference action. The Sycamores will open MVC play at home against Valparaiso and Loyola before visiting UNI. Laura Gross is collecting 3.06 kills/set and 3.53 digs/set while first-year setter Makayla Knoblauch is dishing out 9.70 assists/set along with a team-best 11 aces. UNI leads the all-time series, 59-5, and the Panthers are also 31-0 against the Sycamores at home.

PANTHER STATE
This is the 29th consecutive season that at least 10 Iowa natives are on the UNI roster including the second year in a row that 14 of the 15 Panthers are from Iowa. Each of UNI’s last 7,597 points played dating back through last season have included an all-Iowa lineup on the court.