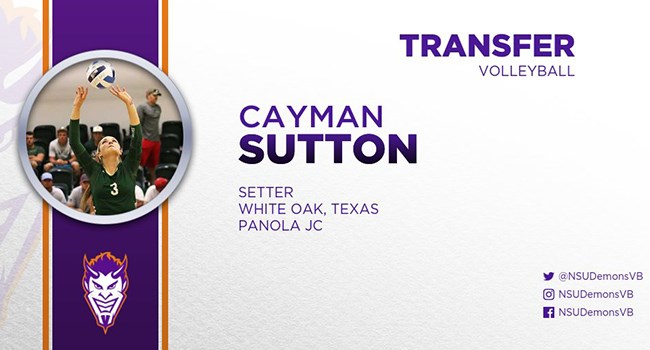 The Northwestern State Lady Demon volleyball program is tacking on an addition from the junior college ranks, as they are bringing on Cayman Sutton from Panola Junior College. After spending two seasons with Panola College, Sutton will be a junior in 2018 and join the team in time for spring practices.

“She brings energy and competitiveness,” Northwestern State head coach Sean Kiracofe said in the team’s release of the news. “She competed for a Panola team that made long runs in the national championships. She just has that winning attitude to go along with her energy and competitiveness that will pay off and already has in practice. She’s stepped up that level of fight when we get in there and compete.”

Northwestern State finished the 2017 season with a 15-17 mark and went 10-6 playing in the Southland Conference. Sutton becomes the third setter in her position group for 2018 – plus any other fall additions – including last year’s starter and soon-to-be-senior Kathryn Wristen.