What if there was a secondary postseason tournament for DI-II Men's Volleyball teams that didn't make the NCAA Tournament? Archive Photo via Charlotte Sports Information

This year in the NCAA women’s classification, the NIVC Tournament added a wrinkle to the postseason. It’s the same idea as the National Invitational Tournament (NIT) in college basketball, where the top 32 teams who don’t make the big dance get a chance to partake in a smaller but still beneficial event.

It may not have the luster of the NCAA Tournament, but it’s a chance for senior to play together another time. It’s also a chance for another trophy, and in men’s volleyball where just seven teams make the NCAA Tournament, having a secondary postseason venture would be an even bigger deal. It’s also important because it can be a jumping off point for a young team who gets extra playing time and development to end the year and get ready for the following season.

So what if there was a secondary postseason tournament? What would it look like? Who would make it this year? We explain all that below: 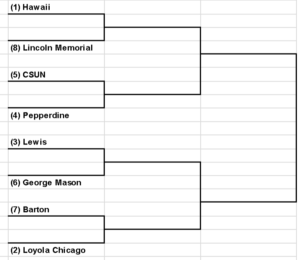