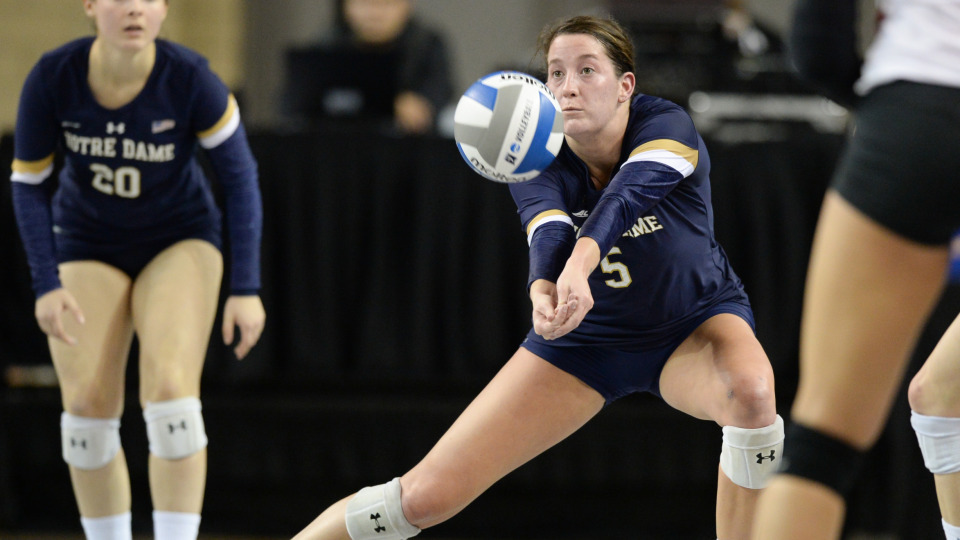 Notre Dame alum Sydney Kuhn has signed her first professional contract to continue her volleyball career with the Evreux Panthers in... Current

Notre Dame alum Sydney Kuhn has signed her first professional contract to continue her volleyball career with the Evreux Panthers in Evreux, France. Evreux plays in the top-tier Ligue A in France, but finished 2nd-to-last in the regular season standings in 2018 with a 7-15 record.

Kuhn becomes just the 8th confirmed player on Evreux’s roster, and just the 2nd outside hitter alongside Loana Berty. All 7 other players confirmed for the squad so far are French nationals.

The team’s top two outside hitter, Safiatou Zongo and Miroslava Kuciakova (ranked 14th and 15th in the 15-team league) both won’t return for Evreux next season. In fact, the team has turned over its entire roster, with only one returning player, backup libero Romane Ruiz, returning from its Ligue A squad. The club has promoted several players from its youth and developmental squads, however.

“I’m super excited,” Kuhn said of her signing. “It’s always been a dream but I never thought I’d actually get to say I was a professional athlete so that seems pretty cool and I’m just excited to be able to continue to play.”

A full Q&A, courtesy Notre Dame Athletics and Robby Hamman, is below:

Q: How are you feeling about signing your first professional contract and your upcoming move to France?

Kuhn: “I’m super excited. It’s always been a dream but I never thought I’d actually get to say I was a professional athlete so that seems pretty cool and I’m just excited to be able to continue to play.”

Q: What did the process entail that led to you joining Evreux

Kuhn: “I reached out to an agency I had actually heard from through a Notre Dame alum. I had a friend who went through them as well, so I knew they were respectable. Then he explained the process to me and gave me a few days to say yes or no. I signed with the agency, sent them all my information, all my film and anything that they needed. He marketed me and when someone was interested, he let me know and here we are!”

Q: How did you decide on signing with a team in France?

Kuhn: “This was the first offer I had. When you get an offer, you have three or four days to say yes or no. We talked about other offers in the making. There were some people interested but this seemed like the best bang for your buck. As a rookie it’s a pretty good contract, it’s a great location and there are some girls that speak English.”

Q: How excited are you to get to experience another culture?

Kuhn:I’m super excited. I had two opportunities here at Notre Dame to go to South Africa and Morocco, which were both incredible. It was amazing and really opened my eyes to how different everything is and getting to be in France for almost a whole year, I think I’ll really get to become part of the culture and understand it.”

Q: How long does the season last?

Kuhn: “It’s a long season. I get there in August and we start play at the end of September. If we’re doing well, hopefully we’ll play until the end of May.”

“Q: How did Notre Dame help prepare you for this experience both on and off the court?

Kuhn: “Off the court, studying abroad really opened my eyes to just how big the world is and how much there is to see. It also helped me not be afraid of this option. I’m going into this pretty blind. I don’t know much and that’s okay. That’s part of the adventure.

“Obviously on the court, having Jim [McLaughlin] and Mike [Johnson], and my team these past four years pushing me and helping me get better has just been incredible. I’m here on campus this summer, working out with the team and getting back into shape.”

Q: What are you most looking forward to in this experience

Kuhn: Living over there, I think because it’s such a great location, it gives people a good excuse to come visit as well as see a different culture. My mom doesn’t even have her passport yet so she’s got to get that and then she can come visit! I’m really excited to hopefully learn French too, or at least somewhat. I’m trying a little bit here but it’s not going so well. I think once I get thrown into it, with everyone speaking it, I’ll have no other choice but to learn.”