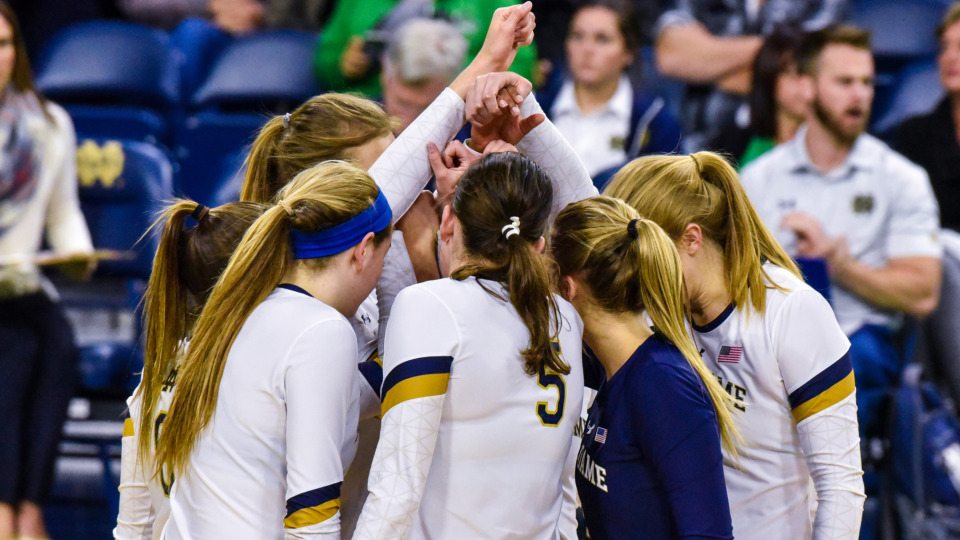 Johnson’s first move was to back-fill his old role of associate head coach, a position that he promoted Katie Wilson to. He also hired Jason Borchin as an assistant coach and Katie Walker as a volunteer assistant, while announcing the return of Kevin Prendergast as director of operations.

“One of the very first lessons [former head coach] Jim [McLaughlin] taught me when I was a young coach was to ‘get the right people on the bus,'” said Johnson. “In selecting new staff members to join the program at Notre Dame, we had 3 criteria: (1) We wanted people who would work exceptionally hard. (2) We wanted genuinely good people who understood that coaching is about the players.  (3) We needed positive representatives of the University of Notre Dame. I am confident we have found those people in Jason Borchin and Katie Walker.”

Notre Dame finished last season with a 22-10 record, which included advancing to the NCAA National Championship tournament for the first time since 2012. In the NCAA tournament, they were swept 3-0 by Western Kentucky in the first round.

The Irish’s 12-8 record left them in 5th place in a vastly-improved ACC last season.

Katie Wilson spent the last 3 seasons as an assistant coach at Notre Dame. In her first year with the program, Notre Dame finished 7-25; in the last two, they had 22 win seasons. Those 3 seasons also coincided with the arrival of Johnson as associate head coach.

Wilson’s primary focus has been with Notre Dame setters, including Caroline Holt, who became the 9th player in school history to reach 2000 assists (in spite of just 2 seasons with the program).

Prior to Notre Dame, Wilson was a club and high school coach in the state of Washington (where Johnson had his last job as well, at the University of Washington).

“We are very fortunate to have Katie Wilson as a part of our staff,” said Johnson. “Katie has been a crucial part of building this team over the past three years and I am excited to have her by my side as we continue to build for the future. Katie has an exceptional work ethic, is deeply committed and has the trust of our players. She is a wonderful representative of not only our program, but also Notre Dame itself. Katie will be my right hand person and involved with every facet of the program. We embrace the highest expectations at Notre Dame and I can think of no one better to help lead our program than Katie.”

Borchin spent the last 3 seasons as an assistant coach and recruiting coordinator for Cal Poly, who had one of the best seasons in program history in 2017. Last year, the team finished with a 27-3 record, went a perfect 16-0 in the Big West, and advanced to the 2nd round of the NCAA tournament. Borchin led an offense that ranked 5th nationally in both hitting percentage (.309) and kills-per-set (15.05) last season

“Jason comes highly recommended from people that I have great respect for,” said Johnson. “He has good experience in coaching over the last nine years and impressed us in his dedication toward teaching. He comes to us from a program that I am especially familiar with and at which he has had a lot of success. Jason has an understanding of how we want to play systematically and has a passion for becoming further ingrained with our methodology at Notre Dame. We are excited to welcome him and his wife, Jessie, to South Bend.”

Prior to Ca Poly, Borchin was the head beach coach at Sacramento State for 3 seasons and indoor assistant for 5.

“Katie is a rarity in college volleyball,” said Johnson. “She stepped away from five years of paid collegiate coaching in order to volunteer with us. She has valued long-term learning and growth above immediate compensation. That level of maturity and foresight is something that I admire. We are looking forward to working with Katie and glad to have her here.”