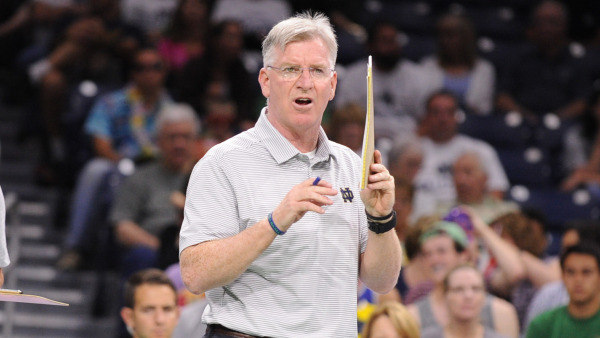 Heading into his fourth year in South Bend, Notre Dame volleyball coach Jim McLaughlin has announced he will resign due... Current Photo via Notre Dame Athletics

Heading into his fourth year in South Bend, Notre Dame volleyball coach Jim McLaughlin has announced he will resign due to health reasons.

According to the announcement, McLaughlin “has been dealing with back issues for some time that recently became so severe that it became difficult to perform all his coaching duties.”

McLaughlin came to Notre Dame in January 2015 as the only individual to coach both a men’s and women’s volleyball team to NCAA titles, having done so on the men’s side at USC in 1989-90 and with the University of Washington on the women’s side in 2005.

Associate head coach Mike Johnson will take over as head coach on July 1.

McLaughlin expressed his thanks for his time at Notre Dame and his desire to give his players the best opportunity to succeed.

“I have thoroughly enjoyed my time at Notre Dame and all of the tremendous people I have met here,” McLaughlin said. “I believe in everything that Notre Dame stands for and appreciate having the opportunity to coach at such a fine institution that has such outstanding values to guide its athletic programs. It has been a privilege representing this great University for the last three years. It has also been a privilege working with all of the fine young women I have had the pleasure of coaching in the volleyball program. These players have worked hard and have committed themselves at the highest level both in the classroom and in the gym. They continue to make progress and, in time, I believe Notre Dame volleyball will get to the NCAA Final Four and win a national title.

“I have always asked my players to give everything they have mentally, emotionally and physically and unfortunately, at this point, I cannot make that same commitment to them nor can I give back to them that same level of dedication to coaching that they need and deserve. I considered a leave of absence to resolve my back issues but with no certainty as to how long that will take, elevating Mike to the head coach position now offers the program continuity and recruits more certainty as to who will be leading the program in the future.

“While I work to get my back issues resolved, this will also give me an opportunity to spend more time with my family. Coaching at this level takes a significant amount of time and I have not always been able to spend the time I wanted with my wife and three daughters who have been so understanding during my coaching career. Now, while I am working to get back to full health, I will get the opportunity to watch my two oldest daughters play soccer at the collegiate level and be more involved in my youngest daughter’s activities. I came to Notre Dame because I felt it was a special place and I am leaving even more convinced of that fact. This school offers its student-athletes an incredibly unique college experience and I feel fortunate that I was able to coach here. There is no doubt I will miss being around the players but I am also excited for the future of Notre Dame volleyball.”

Athletics Director Jack Swarbrick shared his thoughts on McLaughlin as well as his replacement, Johnson.

“Everyone at Notre Dame wishes that Jim were able to continue to lead our program,” said Swarbrick, Notre Dame vice president and James E. Rohr athletics director. His impact on our program during the past three years has been everything we hoped it would be. But our first concern is Jim’s health and for that reason we fully support his decision.

“Mike’s previous head coaching experience added to his time at Notre Dame give us great confidence that he will build upon the foundation that Jim has laid, allowing us to continue to build a championship volleyball program–one that puts our students in a position to succeed on the court, in the classroom and in life.”

Johnson brings plenty of experience to the head coaching role, having serving in the same position at Xavier from 2010-14. With the Musketeers, Johnson managed four 20-win seasons and four conference runner-up finishes, three in the Atlantic 10 and the last in the Big East. He also was head coach at Austin Peay in 2009, posting  22-9 record.