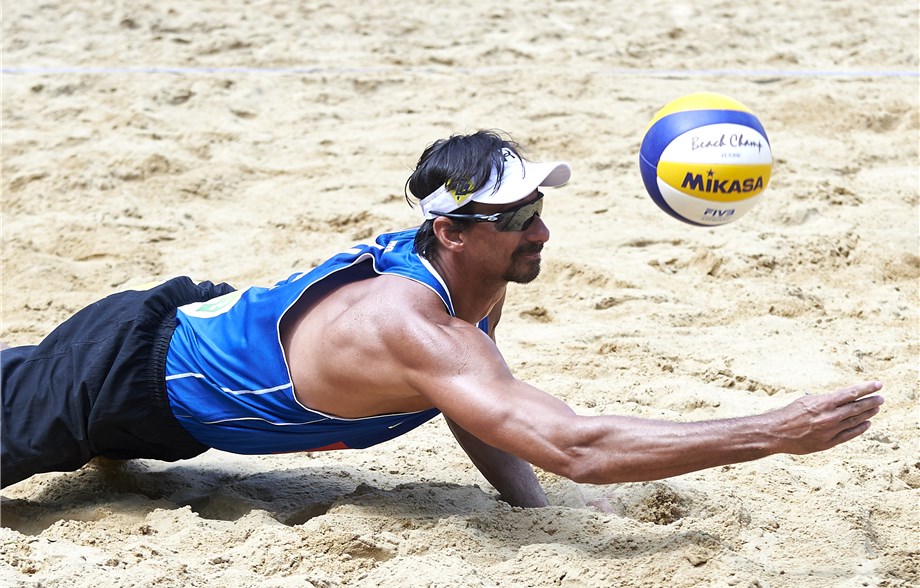 Without a partner for the season after Vitor Felipe decided to leave and form a partnership with World Champion Evandro Gonçalves, the 24-year-old Gustavo Carvalho dared greatly. Without having much to lose, he picked up his phone and called Olympic Champion Ricardo Santos, 19 years his senior, to invite him to be his new partner. Ricardo accepted (Globo.com):

“I imagined that some of the rosters would change later in the year, but didn’t think it would be this quick. When Alison Ceruti and Bruno Schmidt split up, it created a domino effect in Brazilian beach volleyball which ended up affecting me, as my partner also left. In a moment of so many changes and hardships, being alongside an excellent and experienced athlete like Ricardo only helps me. I am very excited with this new partnership and am sure we’ll play great tournaments together. It’s a mixture of honor and astonishment to play alongside the “Block Machine.” Amid all this confusion, I feel excited and privileged. Even though he did not play in the World Tour last year, Ricardo is still the best blocker of all time, full of energy, and ready to compete. He never stopped taking care of his fitness. At the end of last year, I was in Orlando and trained with him a bit. Was that a foreshadowing of what was to come?”

Besides his Olympic gold medal in 2004 alongside Emanuel Rego, Ricardo also won silver in 2000 and bronze in 2008. He is also a a six times World Tour winner. He says he is ready to come back to the sandy beaches at a high level:

“I have been playing in the tour since 1994. I am used to it, I can help Gustavo with my experience. In my opinion, he is the best defender in the Tour. Being invited by him is a condition that will allow me to play at a high level. I am very happy. Here in the USA I see many athletes at my age still playing the game. I don’t see myself stopping. I am privileged, since now some master categories are starting to spring up as well.”

The new duo is set to debut in Poland in June. The new partnership is sure to meet some financial difficulties along the way, as Brazil’s Volleyball Federation only offers stippends to the country’s Top-3 duos in the Tour. Since Ricardo has been out of it for a while, it will take some time before the new duo builds up its chops to achieve a high position in the rankings.