The 2017 MIVA conference tournament field has been determined. Current Photo via Jay LaPrete

The 2017 MIVA tournament field has been set with Ohio State earning the #1 seed after an undefeated 16-0 mark in MIVA league play.

Ohio State becomes just the second team in the last 25 years to post and undefeated MIVA regular season – with Loyola going 14-0 in 2014.

The Buckeyes are set to host the #8 seeded team, Quincy (2-14) who made the tournament over Fort Wayne due to a tie breaker. The Hawks squeaked into this years tournament by .004 points. The tiebreak breakdown: the two schools each split matches with each other, with each winning in five and scoring the same amount of points in each match. Next, the tiebreak moved into sets won and lost in league play with Quincy breaking the tie at .285 to Fort Wayne’s .281 mark.

Lewis holds the #2 seed of the tournament with a 13-3 record in the conference and will face #7 seed Lindenwood who went 4-12.

In the final season with the MIVA conference, Grand Canyon (11-5) picked up the #3 seed to face #6 seed McKendree (6-10). Grand Canyon is set to compete in the MPSF in the 2018 season, and will also complete their four year transition into Division I athletics next season – becoming eligible for the NCAA Tournament beginning in 2018.

The final match-up is #4 seed Ball State who will face #5 seed Loyola, with each team ending conference play 9-7. Earlier this season, Loyola swept Ball State, with the reverse happening this past Saturday. A tiebreaker was used to determine position in the tournament, with Ball State topping Loyola by a single point.

Breakdown of the bracket: 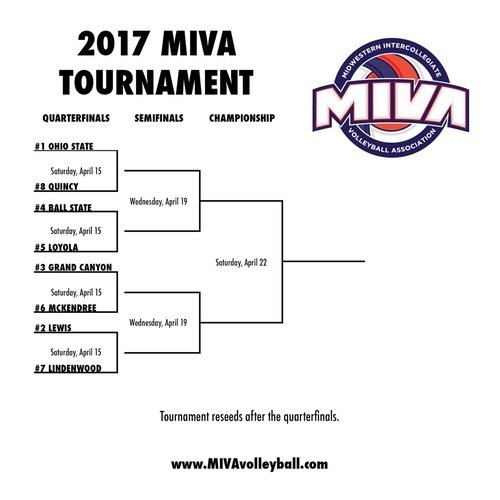 Courtesy of the MIVA

Quarterfinal play will begin on April 15 with the higher seeded team hosting the match. Once the quarterfinals conclude, the tournament will reseed. The semifinals will be played on April 19 and the MIVA Championship match will be held on April 22.