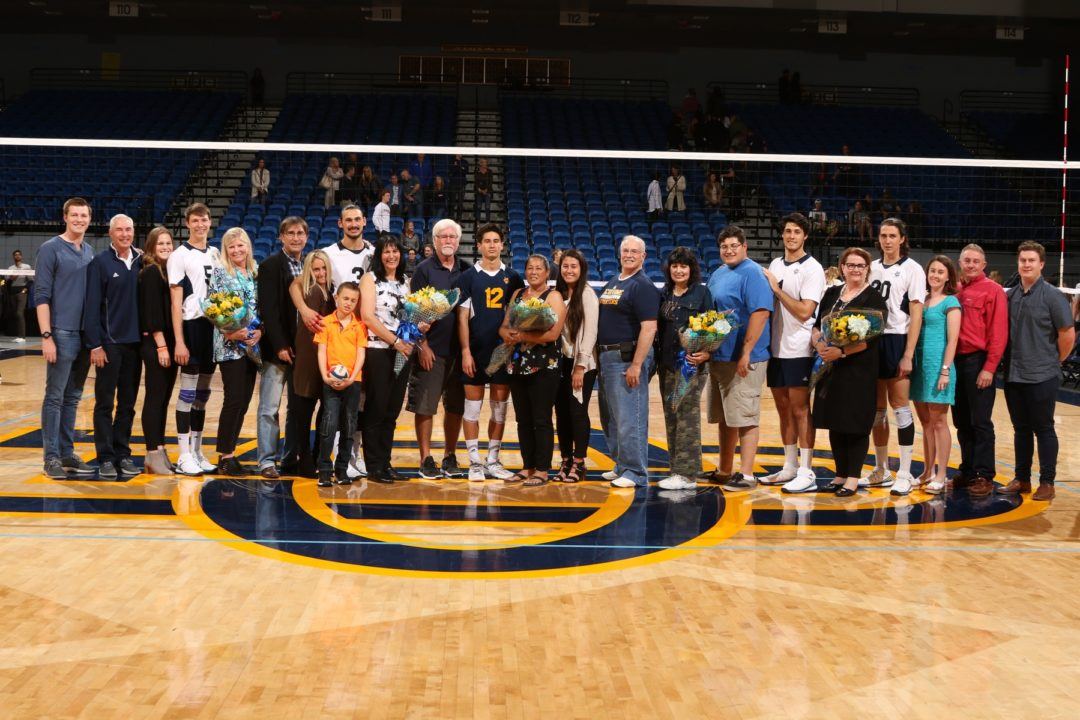 With an 8 in a row win streak, UCI finished 4th in MPSF after defeating Pepperdine during their senior night. Senior Michael Saeta hit a school record for aces with a total of 62 in a season with serving up 4 aces in the match. Saeta also had 60 assists, 7 kills, and 8 digs. Outside hitters Tamir Hershko and junior Aaron Koubi had 21 kills together and libero Dillon Hoffman had a career-high

Pepperdine senior David Wiezorek lead the Waves with 19 kills, 3 blocks, and 8 digs while Soren Dion-Kindem had his 5th career double-double with 46 assists and 10 digs as well as 4 blocks and 2 kills.

UCI closed out the regular season with a 13-5 MPSF record, going to 19-6 overall. The Anteaters, who extended their winning streak to eight in a row, finished fourth in the MPSF and will host fifth-seed UCLA Sat. (Apr. 15) at the Bren Events Center in a quarterfinal match.

In the first set, Pepperdine started with a quick 3-0 advantage and continued to lead 19-16 before UCI came back with the next four points, a kill and three consecutive aces by Tamir Hershko to take a 20-19 lead. Back-to-back UCI attack errors moved the Waves back in front 21-20. An Aaron Koubi kill and a Pepperdine attack that went wide gave UCI the 22-21 advantage. The teams would continue to trade points until a UCI service error was followed by a kill by David Wieczorek to give the Waves the set, 29-27.

UCI evened the match with a 25-19 win in the second set. A 7-1 run which included back-to-back aces by Michael Saeta gave UCI control of the set, 15-9. Hershko lead UCI with six kills in the set.

In a closely contested fourth set, Pepperdine would sneak ahead 16-13 on a kill by Colby Harriman and a UCI attack error. UCI would get as close as one the rest of the way with the Waves winning 25-21.

UCI would lead 12-10 on a Hershko kill in the fifth set, before Pepperdine had a kill and back-to-back blocks to go in front 13-12. The teams would side-out until a Wave attack error and two Hodges kills kept the Anteaters perfect in five-set matches, 17-15.

With the match tied 2-2, the opposition started the fifth set strong with a 7-3 lead early on.  The Waves rallied back and brought the deficit to one-point at the 9-8 mark with a kill from redshirt-sophomore David Wieczorek (Chicago, Ill./Loyola Academy), an ace from senior Mitchell Penning (St. Louis, Mo./Westminster Christian HS) and a block collaboration from junior Clay Carr (Costa Mesa, Calif./Newport Harbor HS) and Wieczorek.

Pepperdine tied the set at 13’s and had the match-point advantage at the 14-13 mark, but a strong attack by the Anteaters flipped the switch and eventually the home team garnered the 17-15 set win to shut the Waves down 3-2 on the night.

Carr posted a team-high five block assists and Penning was good for eight kills on a solid .636 hitting percentage, along with one ace and four blocks including a solo block.

The Waves jumped out of the starting gate early in set one, picking up a 7-3 lead and maintaining an advantage throughout until the final moments of the set.  The opposition tied things up 19-19 and each side continued to exchanged points en route to a 25-25 tie to send the set to extra points.  After the 27-27 mark, a Eater service error followed by a smash from Wieczorek put the Waves up 1-0 on the day.

With the match on the line in the fourth, the Waves came out strong offensively, amassing multiple kills from Wieczorek and junior Colby Harriman (Rochester, N.Y./McQuaid Jesuit HS) helped the Waves pull ahead 18-15.  With the momentum on the Waves side, Pepperdine continued to pound down on the opposition with smashes from Penning, Dyer and Wieczorek to win the set 25-21 and send the match to the fifth.

After ending regular season tonight, the Waves will head into postseason with the MPSF quarterfinal match-up set for April 15 against No. 4 Hawai’i.  Find official start times on PepperdineWaves.com.  Follow Pepperdine @PeppVolleyball on Twitter and Facebook for immediate updates and head to PepperdineWaves.com for recaps, results and more