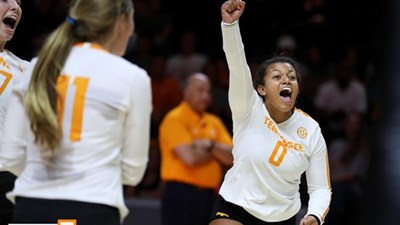 Former Tennessee defensive specialist/libero Keyton Kinley is transferring to Oklahoma for 2018. A true freshman for the 2017 season, Kinley will be a sophomore come next fall with three years left of play. It’s likely she will be eligible immediately too as she is moving conferences.

A two-time team MVP at Lafayette Senior High School, Kinley joined Tennessee this past season and appeared in 49 sets of action, logging 68 digs. A big amount came in the season finale for her, as she notched a career-high 22 digs in a five set match against LSU in late November.

A 5’6″ native of Lexington, Kentucky, Kinley hails from the same city that Oklahoma’s new head coach, Lindsey Gray-Walton, was previously at. It’s likely the two had a prior recruiting relationship, which would add to the comfort-ability of this move if true.

It’s also the second transfer that Gray-Walton is bringing to the Sooners’ program, as Oklahoma also is welcoming on Kylee McLaughlin – the 2017 Pac-12 Freshman of the Year.

The two new additions will look to help turn a program around that went 7-22 last season. Specifically for Kinley, she will look to impact her position as she joins two other defensive specialists and will have a shot to compete for the starting libero role.

so happy to announce that I will officially be ballin out at the University of Oklahoma!! boomer sooner?♠️ #thewaltonera pic.twitter.com/5ovJYa6yAM