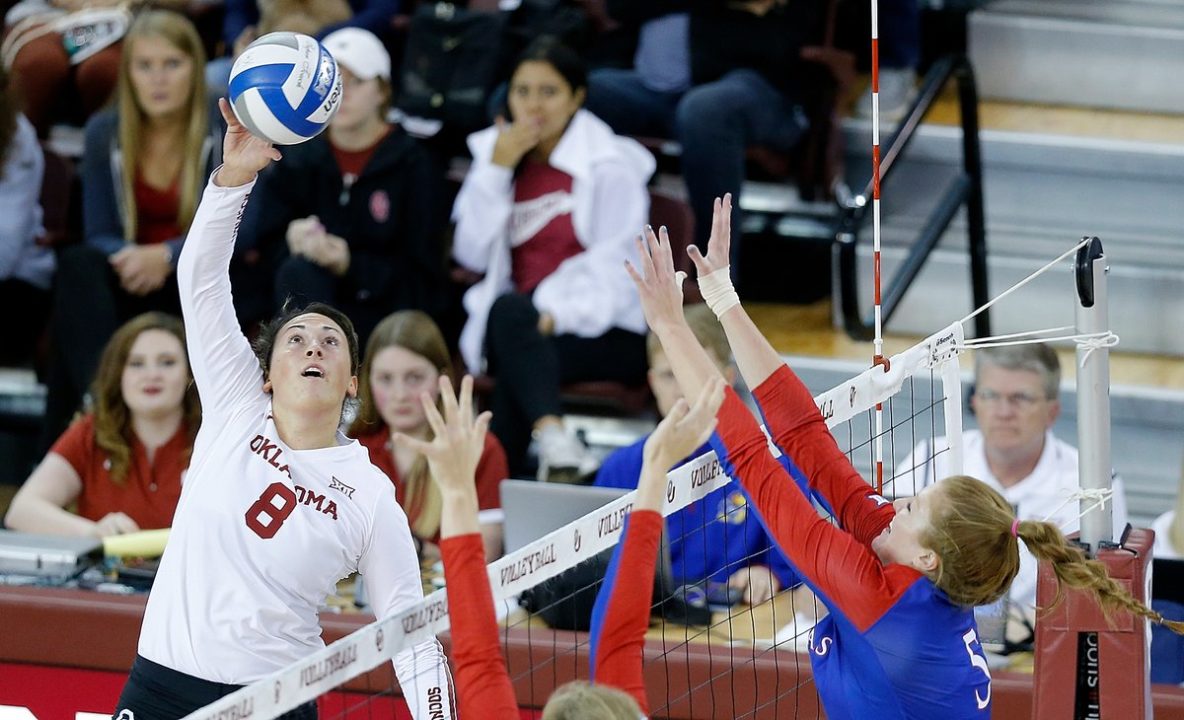 The match proved historic as senior outside hitter Alyssa Enneking earned her 1,000th career kill, becoming the 14th person in OU history to join the 1,000-kill club. The League City, Texas, native sealed the feat in the third set with her 10th kill of the evening.

“It’s a really fun way to represent my university and remember my time here,” Enneking said. “It’s something that I’ll cherish forever… Being at the University of Oklahoma and being in the record books here is something special.”

Overall, Enneking led the match with 23 kills and added 19 digs for her ninth double-double of the season.

Sophomores Kylee McLaughlin and Sarah Maras also registered double-doubles in the contest. McLaughlin led the match with 49 assists and added 10 digs for her eighth of the season, while Maras had the first double-double of her career with 13 digs and 10 kills.

The Sooners came out hot, hitting .390 in the first set with 18 kills. They rolled to a 25-22 victory in set one, sealing the frame on Enneking’s fifth kill of the night.

After falling 25-16 in the second period, OU bounced back with a 25-18 victory in the third. The Sooners held the Jayhawks to a -.032 hitting percentage in the third frame and totaled three blocks, including two assists from Brianna Kadiku.

Despite the Sooners opening the fourth on a 6-1 run, the Jayhawks came back to win 25-20 and force a fifth set. In the final frame, the Sooners trailed by one at 7-6 before a four-point run from KU put OU behind, 11-6. The Jayhawks clinched the match with a 15-10 win in set five.

Up next, the Sooners hit the road on Friday, traveling to Waco, Texas, to take on Baylor at 8 p.m. CT. The match is scheduled to be aired on ESPNU.

WATCH: @allyfool earns career kill No. 1,000 with a perfect tip over the net. 💪 pic.twitter.com/qpyYSfV49x

A milestone but not the end. More to come!! https://t.co/deOCGLf0vl