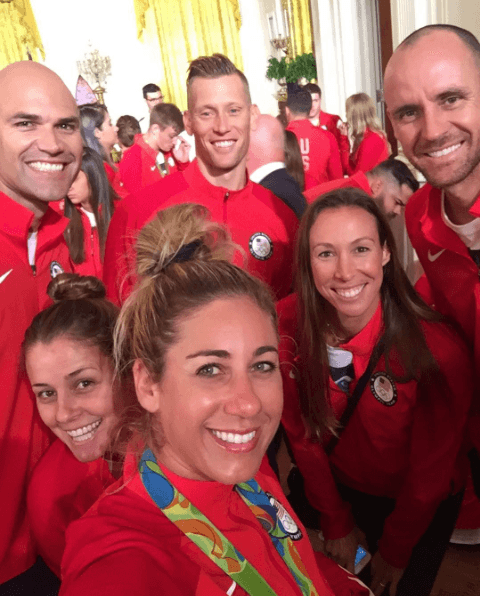 Volleyball Olympians and Paralympians got to meet President Barack Obama at the White House on Thursday. Members of all four US... Current Photo via April Ross/Instagram (Screenshot)

Volleyball Olympians and Paralympians got to meet President Barack Obama at the White House on Thursday.

Members of all four US beach teams that competed in Rio in August were in attendance, medals in hand. Phil Dalhausser, Jake Gibb, Casey Patterson, Lauren Fendrick, Brooke Sweat, and April Ross made it to Washington, DC, for the event.

Members of the women’s sitting team, which won gold at the Rio Paralympics, were also there.

Kelsey Robinson, a member of the Olympic women’s team, covered the event on Snapchat for USA Volleyball.

Ross and Kerri Walsh Jennings won bronze in Rio. Dalhausser/Nick Lucena tied for fifth in the men’s tournament. Gibb/Patterson tied for 19th, as well as Fendrick/Sweat. Both the men’s and women’s indoor teams won bronze.

The US topped the overall Olympic medal count with 46 golds.

“Remember that when somebody is watching you for the first time and they see how hard you work and what you accomplish, and they feel inspired, they feel like they can take any challenge on — what you do has ripples all across the country,” Obama said during his remarks.

Here’s a roundup of what it was like to tour the White House and meet the president, as told by the Olympians’ and Paralympians’ social media posts:

Yesterday we had the amazing honor of being invited to the White House where we had the privilege of meeting President Obama, First Lady Michelle Obama, & VP Joe Biden! It is a day we will never forget! 🇺🇸🏐🏅

POTUS just got to meet all of us! 😜🇺🇸 #TeamUSAinDC #WhiteHouse #USAbeach