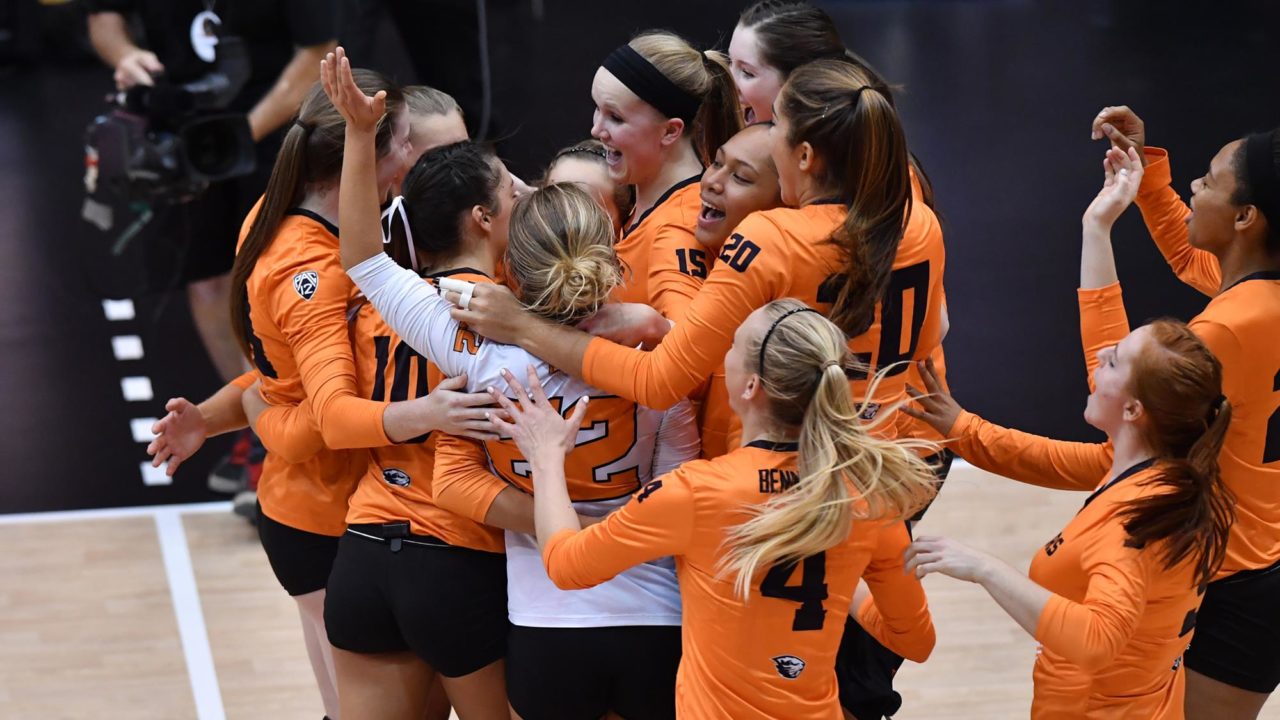 After a five-set win at #13 Washington earlier this week, Oregon State completed the perfect week in the state by downing (RV) Washington State 3-2. Archive Photo via Oregon State Athletics/Dave Nishitani

Pullman, Washington – Just days after pulling off a five-set upset at #13 Washington, Oregon State completed its perfect week with a win at (RV) Washington State in another five-set match.

In the losing effort for the Cougars, Taylor Mims knocked down 25 kills to go with a ridiculous 18 digs and eight blocks, coming so close to a triple-double. No other Washington State player had double-digit kills, as Alexis Dirige patrolled the back row on the other end with 28 digs.

The opening set was tied at 10, but from there Oregon State took the lead and utilized a 15-7 run to finish off a first set that featured seven ties and a pair of lead changes. The Beavers were tied at 17 looking for a 2-0 lead in set two also, but Washington State’s 8-3 run evened the match heading into the short break.

Oregon State would dominate the third out of the intermission, leading coast-to-coast after jumping ahead 10-5. They took that early edge to 24-17 and finished things 25-19 for the 2-1 set lead. That was matched by what Washington State did in the fourth jumping in front 12-2. Oregon State did tighten things up at 16-12, but another flurry from the Cougars gave them the set 25-14.

Washington State was able to muster a strong start in the fifth too as five unanswered made it 6-1 Cougars. However, a 7-1 Oregon State run flipped the lead to their way at the switch. The two teams would be tied at 12, but a 3-0 run finished things off in favor of the Beavers.

In total for the match, Oregon State slightly out-hit Washington State 214 to .213 and both teams recorded four aces. The Cougars did have more digs (71-64) and blocks (14.5-6), although some of the numbers may have been skewed a bit by the fourth set.

Moving forward, Washington State has matches at Cal and Stanford next week. For Oregon State, they will be at home to take on Arizona and Arizona State.

PULLMAN, Wash. – The red-hot Oregon State volleyball team defeated Washington State in an intense five-set match Sunday afternoon. The win over the Cougars completed OSU’s first road sweep since 2011 and the first of the Washington schools since 1990.

“It was a fantastic effort,” head coach Mark Barnard said. “We got two on the road. That’s a big deal. We are coming up on the last week of the first half of conference play. We’ve put ourselves in a much better place. This win really validates our win Friday night. This boosts their belief and confidence in ourselves. We aren’t a fluke.”

Senior Mary-Kate Marshall, who has led the Beavers in kills in 18 out of 20 matches in 2017, was on fire to start the match recording 11 kills in the opening set and finished with 21. Maddie Goings added 13 kills and Haylie Bennett poured in 11. Grace Massey tallied 21 digs for the second straight match to tie her career-best mark.

The Beavers fell behind 6-1 in the final set before a block by Serena Bruin on WSU middle blocker Jocelyn Urias set OSU’s comeback in motion. Kills by Marshall and Kylee McLaughlin helped close the gap, and Bruin kill changed the game’s momentum. Bruin’s shot, which went long was touched at the net by the WSU block bringing about a challenge from WSU coach Jen Greeny.

After a long replay review, the call was upheld and the Beavers trailed by one, 7-6. Marshall aced the Cougs and Goings recorded a kill to give the Beavers the lead 8-7 at the media timeout. Following the break, the team’s sided out back-and-forth and remained tied at 12-12. A service error by the Cougars followed by an attack error put OSU up 14-12 and brought a timeout from WSU. Oregon State’s sixth block of the day, this one posted by Bruin and McLaughlin closed the match for the Beavers.

“We played some really good backcourt defense in the fifth set,” Barnard said. “When we are digging and passing well back there it really gives us energy and we really start to take off. That’s what happened in the fifth. There were a lot of parallels to Friday night with our up and down play. But it was good to see that we didn’t let bring us down and that was key today.”

Oregon State dominated the first set 25-17 behind Marshall’s offense, but Washington State came out firing in the second to even the match, 25-20, going to intermission.

The Beavers, who lost Kayla Ellis for the rest of the match in the second set after she crashed into the bleachers, returned from the locker room rolling on offense. Goings put four balls on the floor and Kory Cheshire added a trio of kills to pace the OSU offense to the 25-19 third set win.

The pendulum swung back in the fourth set and OSU’s offense went cold again. WSU took the set 25-14 to send the match into the fifth set.

Game Notes: With road wins at Seattle and Pullman this weekend, it is the first road sweep for the Beavers since 2011, when they defeated Utah and Colorado on the road … it is the first time Oregon State has defeated Washington and Washington State on the road since 1990 … this is OSU’s second straight win in Pullman … Grace Massey was credited with 21 digs for the second match in a row, which matches her career-high … four OSU players accumulated double-digit digs – Massey (21) and Kylee McLaughlin, Mary-Kate Marshall and Maddie Goings recording 11 apiece … three Beavers posted double-doubles – Marshall (21 kills, 11 digs), Goings (13 kills, 11 digs) and McLaughlin (49 assists, 11 digs) … Kayla Ellis was sidelined for the final three sets after crashing into the bleachers. Makenna Browne filled in for Ellis with a pair of digs.

Next Up: Oregon State returns home next week to host Arizona on Wednesday, Oct. 18, and Arizona State on Friday, Oct. 20, at Gill Coliseum. Both matches will be televised on Pac-12 Networks.

Oregon State volleyball fans are encouraged to join Off the Bench, the program’s new donor club. Click here for more information or call Skylar Erhardt in Our Beaver Nation at 541-737-2370.

Mims, a junior outside hitter from Billings, Mont., led the match with her career-high 25 kills and also recorded a career-best 18 digs along with a season-high eight blocks and one ace. Casey Schoenlein had nine kills while Claire Martin and Ella Lajos added eight kills each with Martin tallying four blocks and Lajos three blocks. Jocelyn Urias had six kills with seven blocks. Libero Alexis Dirige led the match with 28 digs. Penny Tusa had 32 assists and Olivia Coale served two aces.

On what WSU did well in the sets the Cougars won Greeny said, “We served better in those sets, but I feel like Oregon State didn’t play as well in those sets.”

WSU junior outside hitter Taylor Mims said, “We can look at this and focus more in practice about how we can execute and how we can finish. We had a great start in the fifth set. We need to learn how to carry that out and finish the game. This time we can’t hold on to any losses because we have big teams like Stanford and Cal next weekend and we have to look forward in the future. We can’t hold on to things like this, but it was a well-fought match and we can take that instead of a loss.” 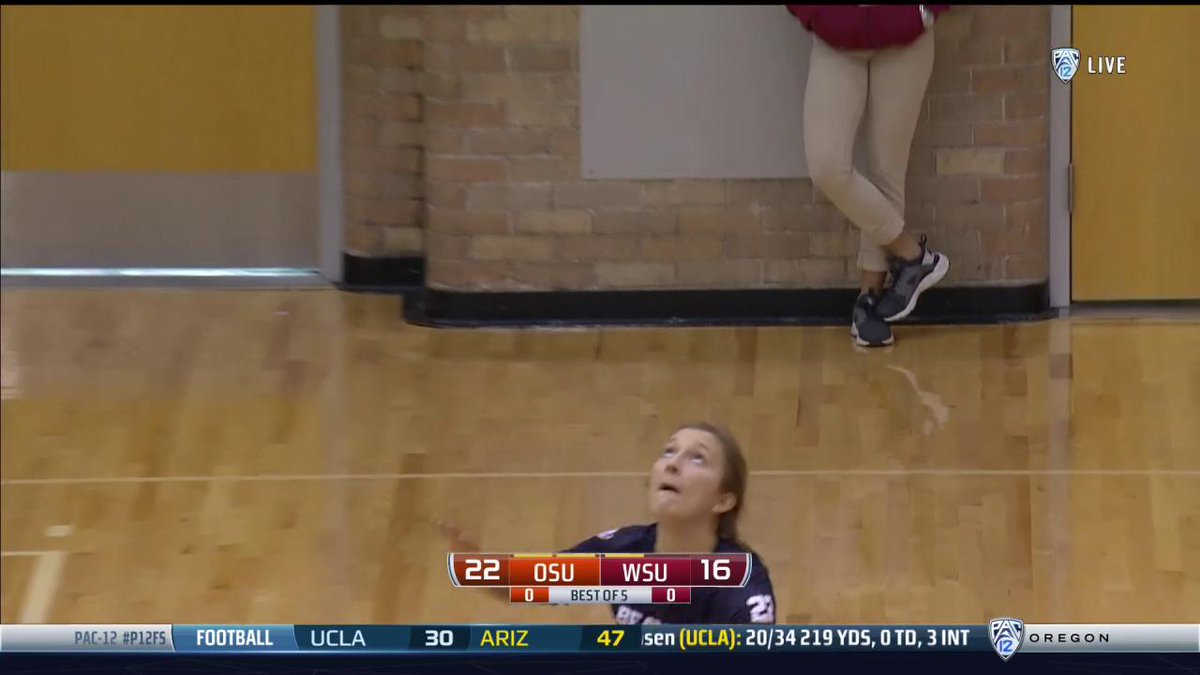 Schoenlein with a kill! #RiseAgain #GoCougs 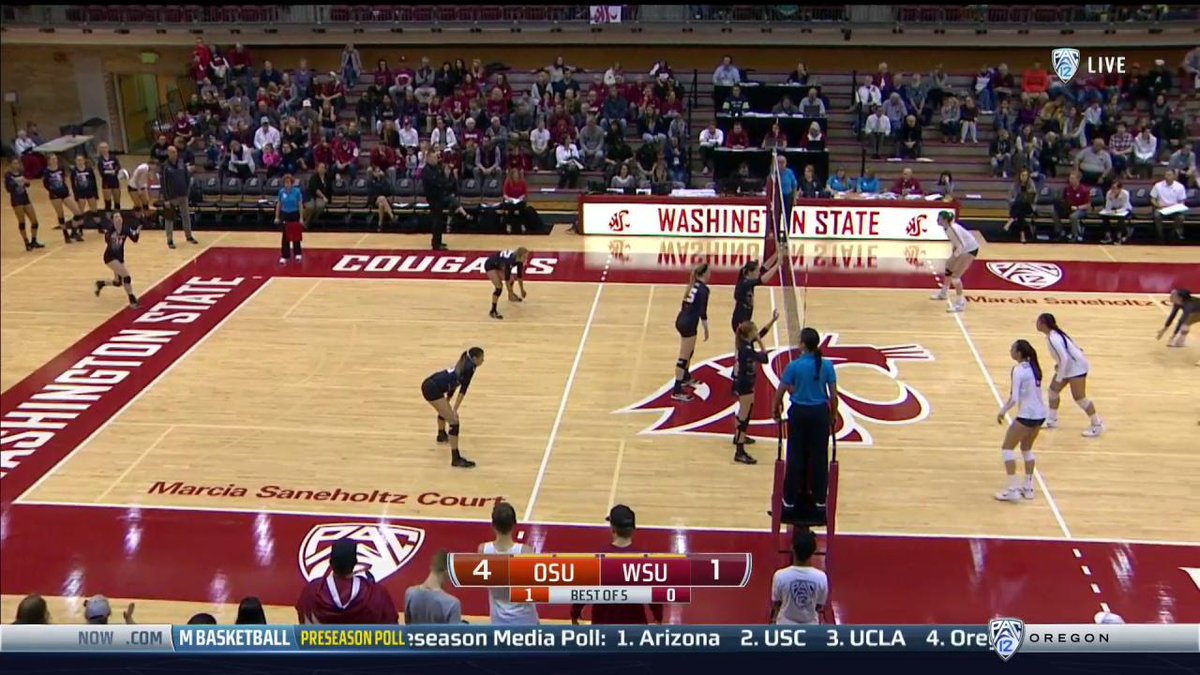 It’s a BLOCK PARTY in Bohler 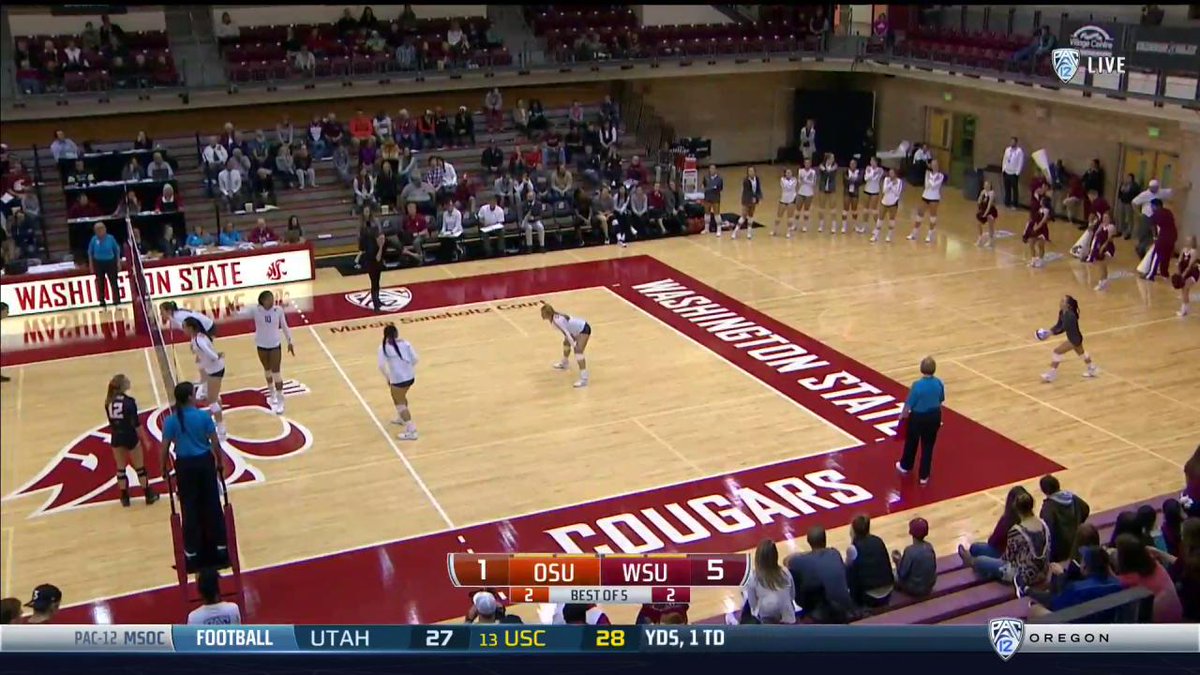 Martin, Mims, and Urias put up THE WALL. #GoCougs#RiseAgain