Pac-12 Honors Tusa, Alade, Nuneviller as Players of the Week 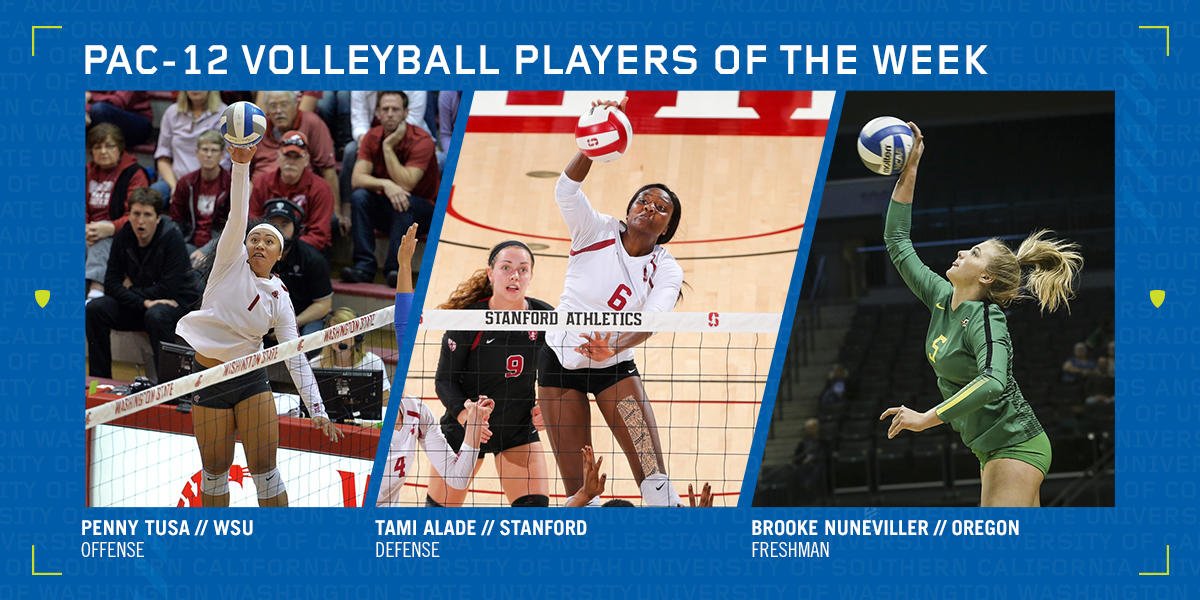 Penny Tusa, SO, WSU (Long Beach, Calif.)
4.86 KPS, 3 SA, 3.86 DPS, 5.4 PPS
• Recorded consecutive double-doubles in Washington State’s first program-road sweep of Utah (3-0) and Colorado (3-1).
• Hit .483 with just one error, adding 14 digs to notch the Cougs’ first road win over Utes in program history.
• Notched a career-high in total kills with 19 and recorded two aces in the win over the Buffs.
• Marks her first-career weekly honor and the 28th all-time for the Cougs.

Congratulations to @penina_5_penny on being named the Pac-12 Offensive Player of the Week!!

Tami Alade, SR, STAN (Sherwood Park, Alberta, Canada)
2.17 KPS, .423 Pct., 1.67 BPS
• Averaged 1.67 blocks per set while hitting .423 in a pair of road sweeps over No. 15 USC and No. 20 UCLA to help the Cardinal register its 18th-straight 20-win season
• Hit .545 with six kills and three blocks to help defeat the Trojans.
• Recorded a match-high seven blocks to go with seven kills and two digs to beat the Bruins and keep Stanford undefeated in the Pac-12.
• Marks her first-career weekly honor and the 114th all-time for the Cardinal.

👏 First career weekly honor for Tami Alade and 10th of the season for the 🌲!

Brooke Nuneviller, FR, ORE (Chandler, Ariz.)
6.43 DPS, 4 SA, 1.14 APS
• Averaged 6.43 digs and 1.14 assists per set in a sweep of Arizona State and a 3-1 win over No. 23 Arizona.
• Led all players with 27 digs for her fifth 20-plus dig performance of the year, while racking up a career-high four aces in the win at Arizona.
• Has recorded double-digit digs in 14-straight matches and 18-of-20 matches played this season.
• Marks her third weekly freshman honor this season and the ninth all-time weekly freshman honor for the Ducks.

ICYMI, @brookeyy_5 earned her third Pac-12 freshman of the week honor of the season after a stellar weekend for the Ducks in Arizona. #GoDucks