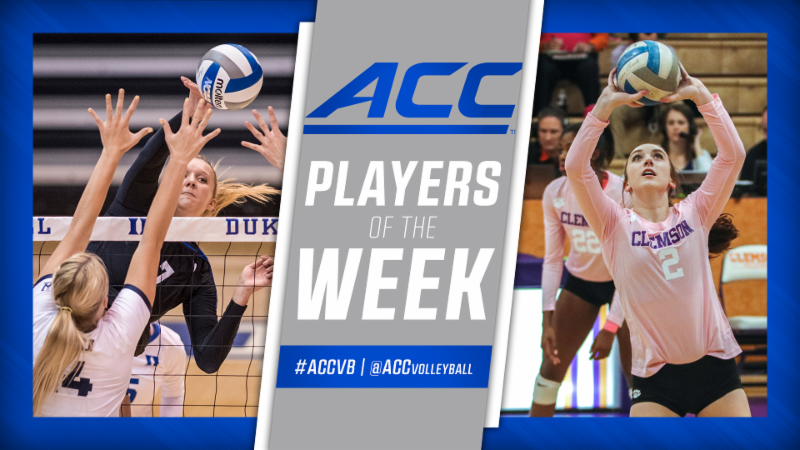 Duke’s Leah Meyer has been named the ACC Volleyball Player of the Week, and Clemson’s Gabby Easton has been selected as the Freshman of the Week. Current Photo via Atlantic Coast Conference

GREENSBORO, N.C. – Duke’s Leah Meyer has been named the ACC Volleyball Player of the Week, and Clemson’s Gabby Easton has been selected as the Freshman of the Week.

Meyer and the Blue Devils defeated Virginia (3-0) and became the first team this season to knock off No. 5 Pitt when they won in four sets over the weekend. The junior middle blocker from Clarence, New York, tallied 11 kills on a .364 hitting percentage, along with nine total blocks against the Panthers. Meyer racked up 18 total kills on a .308 hitting percentage, with 13 total blocks and four digs on the weekend.

Congrats to ACC Player of the Week @leahmeyerrr‼️

Easton claims her second straight ACC Freshman of the Week honor after Clemson defeated NC State (3-1) and North Carolina (3-0) this past weekend. The rookie setter from Anderson, South Carolina, averaged 11.85 assists per set in the two wins, recording at least 40 assists in each match. Easton tallied 83 assists, 10 kills on a .473 hitting percentage, eight digs and seven blocks total across the two matches.

When you win back-to-back ACC Freshman of the Week honors!