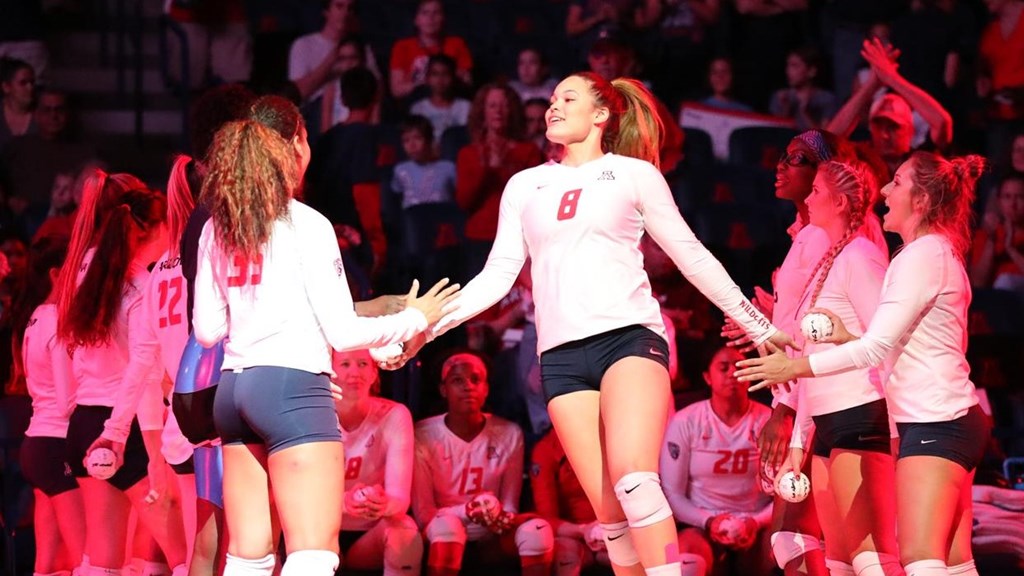 Dahlke is the 3rd Wildcats hitter to miss time with a concussion this month, and the offense has struggled with the absences. Current Photo via Arizona Athletics

A 2nd Arizona Wildcat volleyball player has been sidelined with a concussion. The Pac-12 leader in kills, Kendra Dahlke, missed Sunday’s 3-1 loss to #12 USC with a concussion that she suffered in Friday’s sweep at the hands of UCLA.

Dahlke finished the match against UCLA, but was ruled out of Sunday’s showdown. She joins Elizabeth Shelton in the concussion protocol. Shelton has now missed 8-straight matches for the Wildcats. The team is just 3-5 in those matches.

The Wildcats did get the return this weekend of starting outside hitter Paige Whipple, who also was in the concussion protocol, which helped fill the gap left by Dahlke’s absence. Whipple had 11 kills in the match against UCLA, but hit just .132 – part of a .179 team effort. Against USC, she had 11 kills and hit .028, part of a .164 team effort. That was the team’s 2nd-lowest hitting effort of the season (they hit just .147 against Stanford in September).

Katie Smoot led the team with a career-high 13 kills, while Candice Denny matched Whipple’s 11 kills. All 3 of those players are sophomores.

“I thought Katie played terrific today,” said Arizona head coach Dave Rubio after the match. “Overall it was a tough match for us. I thought our first contact skills weren’t at the level we needed them to be. They were the far better team from the service line today.”

The road ahead for the Wildcats in the loaded Pac-12 is as much of a break as can be hoped for in this scenario. They have 4-straight matches at home, those 4 matches against Colorado, Utah, Oregon State, and Oregon. Oregon is 5-2 in Pac-12 play, but Colorado, Utah, and Oregon State are a combined 6-18 in conference play this season (though Utah did pull off a mighty 3-1 upset win over Oregon on Sunday).