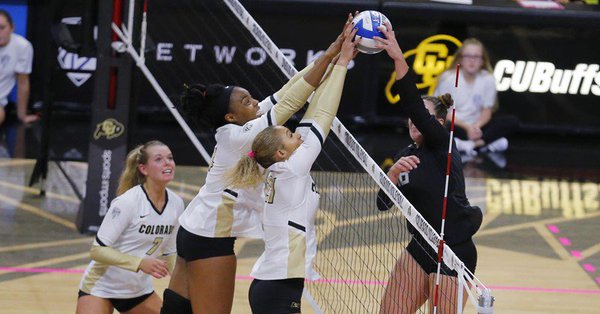 BOULDER, Colo. – The University of Colorado women’s volleyball senior Naghede Abu made history by becoming just the second player in school history to record 500 career blocks Sunday afternoon in a sweep (25-18, 25-20, 28-26) of Oregon State at the CU Events Center.

Naghede Abu put down her 500th-career block and CU gets the sweep! #GoBuffs pic.twitter.com/9MAEIPs1aX

The moment came early in the third set when Abu put down a solo block to give CU the lead at 5-4. Earlier this season Abu became the all-time rally scoring leader in blocks, but with the historic milestone behind her Abu chases only Meghan Barkman who finished her career with 565 total blocks.

Abu was dominant for the Buffs on both ends in the sweep, finishing with a team-high .533 hitting percentage with nine kills. Abu was joined on the offensive end by Alexa Smith, who led the team with 12 kills, while Justine Spann added nine kills of her own.

Smith was everywhere against the Beavers, posting 17 points with her dozen kills. She also had a career-high four aces and a pair of block assists.

Setter Brynna DeLuzio posted her third double-double of the season with a team-high 19 assists and 11 digs. Jenna Ewert added 13 assists.

Defense was the story as the Buffs posted eight and a half blocks in the sweep. Abu led the team with six blocks, while five other CU women added a pair of block assists. Colorado’s wall helped hold Oregon State to a .175 hitting percentage. Anything that could make it past was cleaned up by Rachel Whipple with a team-high 13 digs.

SET 1: The Buffs started thing out with a 4-2 lead. Colorado went on a five-point run to advance to a 9-4 advantage, causing Oregon State to call a timeout. After back-to-back aces by Alexa Smith, the Buffs took a 13-5 lead. The Buffs ran away to a 19-11 lead when the Beavers called their second timeout. OSU began to get back into it at 22-17. CU hit set-point at 24-18, finishing off the set on the next point.

SET 2: The Buffs ran off a four-point run to take an early 9-4 lead. The Beavers were able to climb back into it at 9-8 where the teams continued to trade points. The Buffs reached the 15-14 media timeout unable to extend a lead with both teams siding out well. CU was finally able to get a three-point lead at 20-17, forcing Oregon State into a timeout. CU posted another pair of points which led to an Oregon State timeout at 22-18. The Buffs were hitting .250 as a team with six and a half blocks already. The Buffs hit set-point at 24-20, finishing the set on the next play. CU took hold of the first two sets with dominant blocking that also led to Oregon State unsuccessfully trying to hit around the block and posting 15 errors.

SET 3: The teams traded points for the first few rallies before CU slowly extended out to a 10-6 lead. The Buffs were hitting well again with a .625 percentage with no errors. Naghede Abu was having a great game with nine kills and a .571 hitting percentage. A pair of back-to-back Anyse Smith kills brought CU to a 16-9 lead. The Buffs reached 20 points at 20-14 and continued to battle towards their first sweep in nearly a month. The Beavers worked back into it after switching to a 6-2 and going on a run, tying the match at 24 all and pushing it to extra points. The Buffs finally sealed the win at 28-26.

“I thought we played really well. We had some lapses from time-to-time, but we were always able to build a nice lead and then kind of get our feet underneath us at the end of sets to close it out. I thought that our passing was a little rough early on but got better as the match went on. They targeted Rachel (Whipple) and she withstood the challenge. She played really well. They did everything we thought they would do and when we executed our game plan I thought that we had a lot of success. It was a good match. Sweeps are tough to come by in this conference so we’ll take them when we can get them.”

On going into next weekend

“We’re 3-5 in conference play right now, this is a conference where anyone can beat anybody. We have to be the ‘anyone who beats anybody’ next weekend. We’ve given a few games up early, especially at home. We need to find some wins on the road to right that. Last season we were at .500 at the mid-point, now we’re battling to get there. Our focus is about getting better every week and we’ll have to get better this next week because Arizona and Arizona State are really good, especially at home.”

On the effectiveness of the team’s good passing

“The first game we started out strong. It helped us build that gap. In the second game we started to struggle a little bit more, but coming down to the third set we played really well and that lead us to our final points.”

“It feels amazing. I know there have been some really good middle blockers ahead of me. So, for me to get that honor is amazing.”

On what the sweep means

“For me, it means nothing. Like Jesse (Mahoney) says, ‘Arizona and Arizona State are really good.’ Oregon State is a very good team so it was good to be able to beat them in three sets. But, we have really good teams coming up so that really means nothing.”