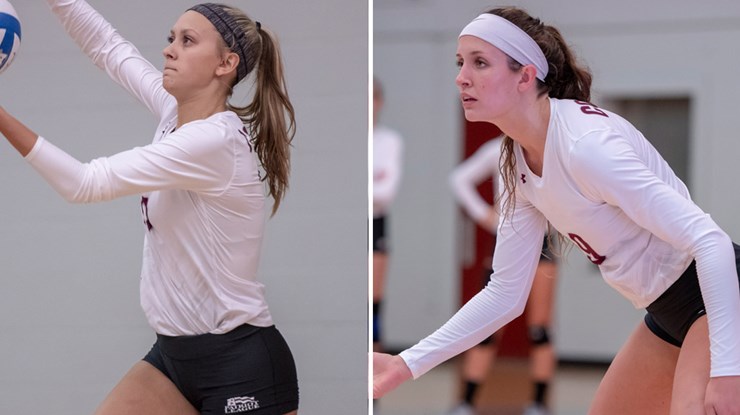 CENTER VALLEY, Pa. — The Colgate Raiders swept this week’s volleyball awards as junior outside hitter Alex Stein was named Patriot League Volleyball Player of the Week and teammate freshman setter Julia Kurowski was selected as rookie of the week when it was announced by the League office on Monday.

Alex Stein, Colgate, Jr., OH, East Setauket, N.Y.
* Stein led the Raiders in a pair of sweeps over Army West Point and Holy Cross as she marked a team-high 15 kills against Army while hitting .438.
* She then nabbed 11 kills while hitting .500 versus Holy Cross to help Colgate post its second-best hitting percentage of the season at .337.
* The Holy Cross win marked the junior’s 11th double-double kill match of the season.

Julia Kurowski, Colgate, Fr., S, Lancaster, N.Y.
*Kurowski set a career-high in service aces with six in the Raiders’ sweep of Holy Cross on Sunday.
* She also posted eight blocks against the Crusaders.
* The rookie notched three digs, one ace and one kill in the sweep of Army West Point.

After a pair of weekend sweeps, Colgate keeps the brooms out to sweep Patriot League weekly awards‼️ #GoGate

Katie Forsythe, Loyola Maryland, Fr., L, Perry, Ohio
* Forsythe averaged 6.63 per set digs in two matches this past weekend with 16 total against Lafayette and 37 versus Lehigh.

Kelsey Kingsland, Navy, SR., OH, Blackwell, MO.
* Kingsland posted 10 kills and one error on 20 attempts for a .450 hitting percentage to go with two blocks in the win over Lehigh. She followed with a team-high kills versus Bucknell this past weekend.