Payne, Soucie Have Career Nights To Keep Kansas On Top Of Big 12 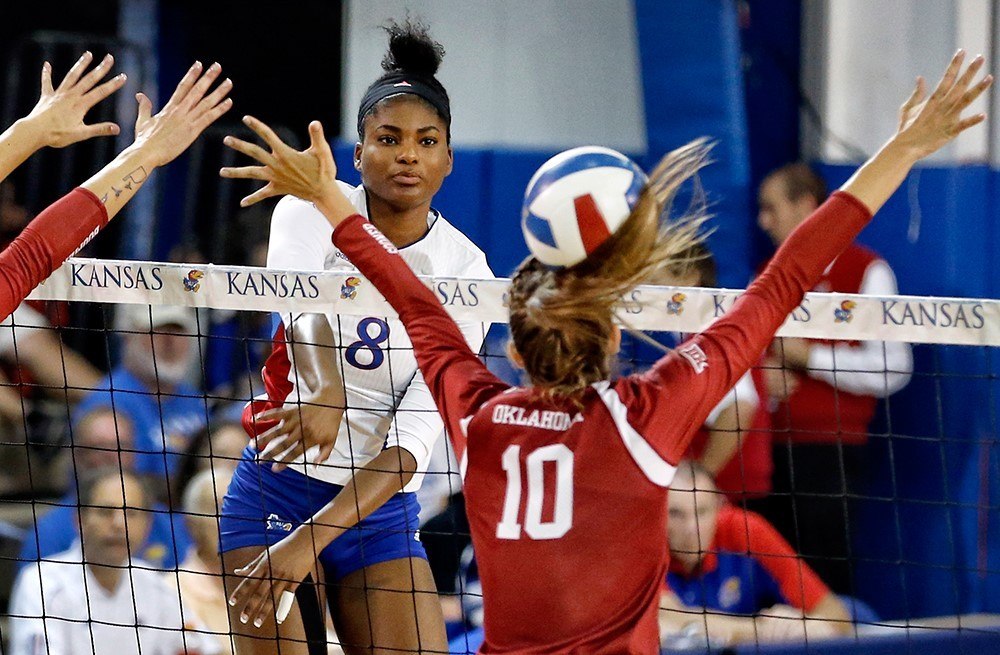 The Jayhawks (22-2, 11-1 Big 12) extend their winning streak to 10 matches to retain a first-place position in the Big 12 standings. Four regular-season matches remain to determine the Big 12 champion.

Soucie contributed three of her six blocks on the night in a critical fourth set, which Kansas rallied from a late six-point deficit, 18-12, to clinch the four-set victory in extra points, 27-25. Kansas also won the second set with a two-point margin, 25-23, to recover from a first-set loss to OU.

KU’s back-row defense did everything possible to keep balls alive and in play all night. Their efforts are reflected by three Jayhawks reach double-figure digs – senior libero Cassie Wait‘s 21, junior Tori Miller‘s career-high 12 and junior All-American setter Ainise Havili‘s 12. Nine of Wait’s 21 digs were converted into kills, while seven of Miller’s 12 were eventual points for KU.

After dropping a close first set, 25-23, the Big 12’s leader in aces, junior outside hitter Madison Rigdon, took over. Rigdon started the set with an ace and finished the second stanza with nine kills, including KU’s last four points in the set, as Kansas equalized the match with a 25-23 decision in set two.

Kansas showed its patented girt in the fourth set, rallying from down 18-12 to clinch its 10th-straight victory with a thrilling 27-25 extra-point decision in the final set. Kansas needed a solution for OU’s offense which recorded 18 kills in the fourth set, despite the loss. Soucie was part of that answer as she combined with her teammates for three block-assists down the stretch, including a block-assist with Rigdon to reach her 500th career block and give KU its first match point, 24-23. The Sooners tied the set two more times before Kansas escaped with a kill from junior middle blocker Kayla Cheadle to  go up, 26-25.

Havili ended the match with an exclamation mark for Kansas and a crowd-silencer for Oklahoma – an untouched ace on KU’s third match point for the win.

UP NEXT
Kansas has a week off before playing host to TCU on Saturday, Nov. 12 in Lawrence.

Opening thoughts on the match:
“We played a team that played really hard. We figured out after the first part of the first set that if we don’t play hard it is going to be a short night. From that point on I thought we tried really hard. It’s great to see us close out two two-point (margin) sets, especially the fourth set when we got down (by six points, 18-12).

“We had really good offensive balance. It came down to us dominating the net at the right time in the fourth set. I’m really proud of the fight we showed. We know our execution wasn’t at the highest level but there was some want-to out there. That was a critical match and it could have been one that — after back-to-back five-set matches against Texas and K-State — for one reason or another we could have faded away but we certainly didn’t. I’m proud of that.”

On Kelsie Payne, the night she reached 1,000 career kills:
“Kelsie got off to a little bit of a slow start, but you look at her line — 21 kills, .381, seven digs, six blocks and an ace – and you wouldn’t be able to tell. Here’s a young lady who never played six rotations prior to this season and now she is contributing from everywhere. To get her 1,000th kill as a junior, that means she is doing a lot of things right.”

On Tayler Soucie, the night she reached 500 career blocks:
“Tayler never quits. When we really needed to score some points with a block, she was there with another six block-assists, along with nine kills. I’m very proud of her efforts today and throughout her career. She will go down as one of the best in the Big 12.”

On the ace on match point:
“(Ainise) Havili had an unbelievable serve to end the match. A lot of times in that (match point) situation you might be tentative and lob one in, but she certainly got after it and it paid off.”

At the midway point of the first, the Sooners held a 15-11 lead as the set reached a media timeout after senior outside hitter Kimmy Gardiner (Grapevine, Texas) recorded her third kill. Four different players posted three or more kills in the set for OU, including six from junior middle blocker Marion Hazelwood (Beach City, Texas).

Kansas held an early advantage in set two until a 6-0 Oklahoma run tied the score at 14 as sophomore outside hitter Madison Drescher (Southlake, Texas) knocked down a kill. Later in the set, the Jayhawks were first to set-point, but Hazelwood notched a kill to force a KU timeout at 24-23 before Kansas won the set.

Needing to win the set to force a fifth, Oklahoma held an early 8-4 lead in the fourth and was in front by as many as six at 18-12. The Jayhawks would eventually pull even at 22 and finished the match on a service ace from setter Ainise Havili.

Kansas’ Kelsie Payne led all players with 21 kills on a .381 attack rate for the night. Madison Rigdon was second on the team with 15 as Havili managed the offense with 53 assists. Cassie Wait picked up a team-high 21 digs.

Four Sooners finished the night in double figures for kills. Hazelwood hit .448 with 16 kills. Spann and Drescher tallied 12 kills each with Spann hitting .360. Enneking recorded her fifth double-double of the season in an 11-kill, 15-dig effort.

The Sooners remain at home for two matches in the coming week beginning with Wednesday, November 9 against Iowa State at 7 p.m.